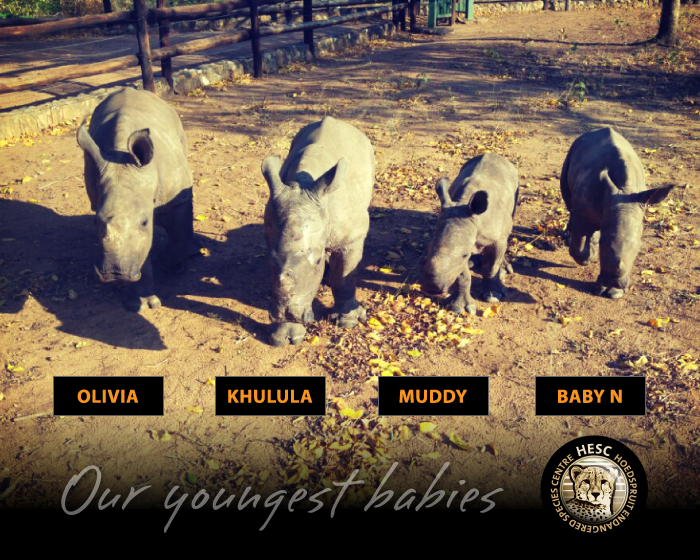 Gertjie and Matimba have been at HESC longer than the other baby rhinos, and are now considered the ‘older brothers’. The two are inseparable and enjoy walking, grazing and napping together. They now happily share their boma with their younger siblings, Stompie and Balu.

Gertjie has been off formula since September 2015. Matimba was recently weaned, and had his last milk bottle on 30 April. Both rhinos absolutely LOVE their teff – just give them that and they head straight to ‘seventh heaven’!

Stompie is now over a year old, and Balu is about seven months old. Stompie currently takes two bottles a day, while Balu is on three. Both rhinos get seven litres of milk per feed. Just like their ‘older brothers’, they are inseparable and spend every moment in one another’s company – walking, grazing, napping, and enjoying the occasional scratch against a tree. They look up to both Gertjie and Matimba.

As we’ve recently had to accommodate more orphaned rhinos, Stompie and Balu have now been moved into Gertjie and Matimba’s boma, and the four boys are happily sharing their space. 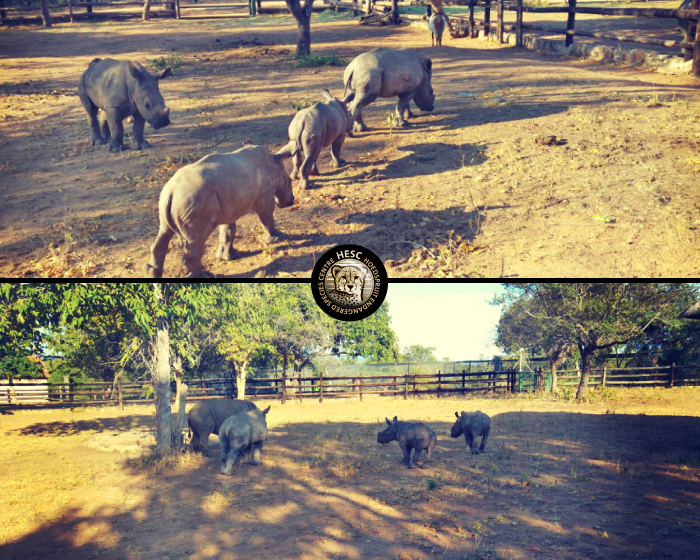 Nhlanhla arrived on 13 April 2016, she was about one week old at the time and weighed 40 kilograms. Now, aged eight weeks, he’s gained 34 kilograms, therefore weighing a healthy 74 kilograms. ‘Baby N’, as he’s fondly called, is very strong and affectionate. He likes going on his own ‘mission’, and belly rubs are his favourite treat. He also likes taking naps in the sun with his siblings, and as he is very playful, he loves running around the boma.

Olivia arrived on 24 April 2016, and was approximately four months old and weighed 143 kilogram. Now, at just over five months old, she’s gained 62 kilograms, and currently weighs 205 kilograms. She has crept into the hearts of everyone at HESC. She has an extremely gentle nature but can also be stubborn at times. For example, when she’s called at feeding times, she likes to take her time. However, she is also very attentive, and listens when talked to.

Olivia loves a good belly rub, is very affectionate and adores attention. She’s even shown signs of jealousy when the other rhinos also want some love. While she is occasionally playful, she is happier spending time enjoying her food and teff (grass). She sometimes even falls asleep while chewing! Olivia may seem lady-like in her ways, but is a very loud snorer…

Muddy arrived on 4 May 2016 when he was approximately two weeks old and weighed 50 kilogram. He’s now about six weeks old and has since gained 10 kilograms, weighing in at 60 kilograms. He not only has a large appetite for life, but for food too! If he could, he would probably drink milk all day long.

Like any baby, Muddy is playful and playtime with his ‘brother’ Nhlanhla is his favourite pastime. It’s beautiful to see how he follows Nhlanhla everywhere. Their days are filled with lots of exercise as they run and chase each other around the boma. We’ve observed that Muddy prefers a head rub to a belly rub, and is generally not as affectionate as the other babies.

This little girl arrived on 21 May 2016, she was approximately five months old and weighed 133 kilograms. She’s since gained 11 kilograms and now weighs 144 kilograms. It took Khulula a while to become accustomed to her curators, and she was skittish and aggressive at first (which is completely understandable after her ordeal). She’s now much more relaxed and comfortable in her new environment.

Khulula was recently introduced to the other three orphans – Olivia, Nhlanhla and Muddy – and we’re pleased to say that the four have a great family bond. In fact, they’ve become pretty much inseparable!

Khulula has a gentle but vigilant nature, and is always cautious in every moment. She enjoys eating grass so much that she actually drools WHILE eating. She loves taking naps in the warm sun, as well as getting belly rubs. She is a good learner and obediently follows the others, with her tail curled up, during feeding times.

All four orphans are doing well, and are happy and growing. They drink, eat and sleep together, although Muddy and Nhlanhla sometimes wander off on their own. The girls, Olivia and Khulula, also sometimes move away from the boys for a little ‘girl time’, but they always end up meeting up for their nap times. They also get a fair amount of exercise by chasing each other around. All four will now be getting six bottles a day each, at three hour intervals between 05:00 and 20:00.

It is extremely satisfying to see all of our orphaned baby rhinos happy, healthy and thriving. Although their care is a huge expense, through the help of our generous community and friends who’ve helped us raise funds, we’ve managed to take care of the day-to-day needs of all the rhinos in our care. 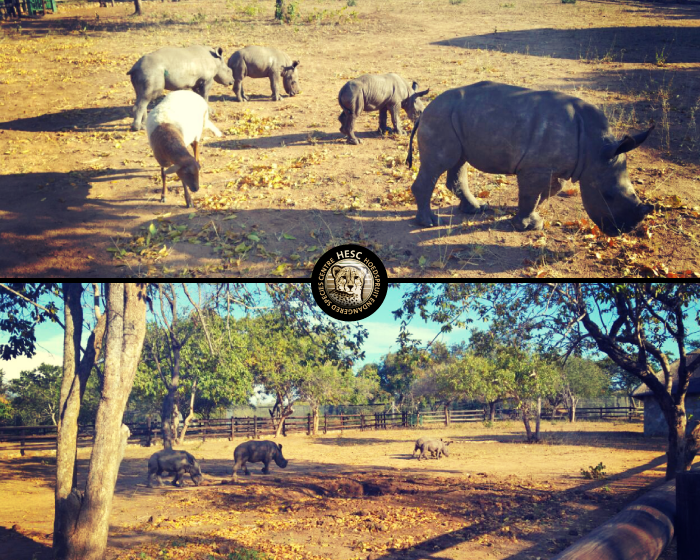