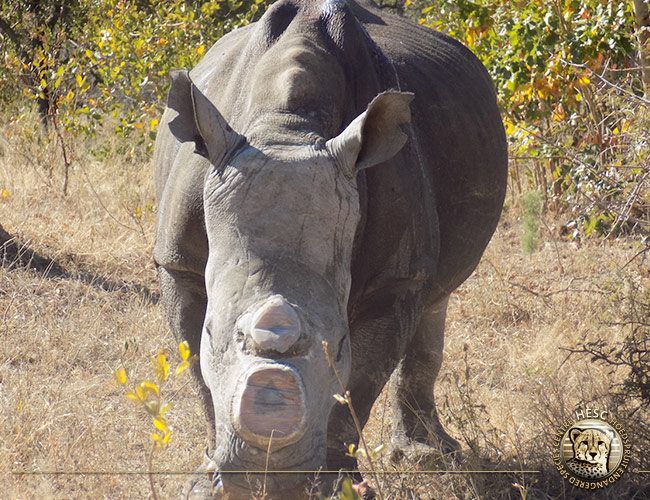 #72 up after the procedure

On Friday 19 June 2015, our injured rhino bull #72 was once again treated by Dr. Rogers and his assistant Janelle. He also had another important procedure done – his horn was removed. Performed by Dr Johan Marais & Rai Landau, this procedure was initiated in the hope of protecting the rhino’s life from would-be poachers.

Dr Rogers, Janelle & Christo (Head Curator at HESC) went into #72’s enclosure to dart him with an anesthetic in order to carry out the two planned procedures. As there are great risks involved in the immobilisation and tranquilisation of animals, it is important that only a skilled veterinarian administer the drugs. 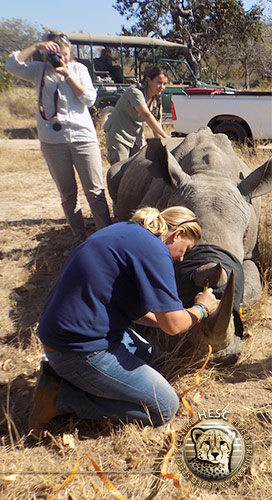 Janelle marking where the horn will be cut 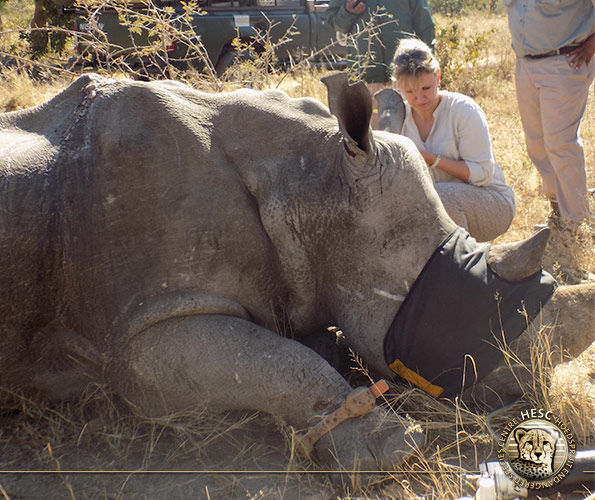 Once #72 was unconscious, a pipe was inserted into his nostrils to assist with his oxygen intake. An IV catheter was inserted for easy access to the vein in case the rhino’s blood pressure dropped. This rarely occurs, but one can never be too cautious and necessary precautions need to be in place. 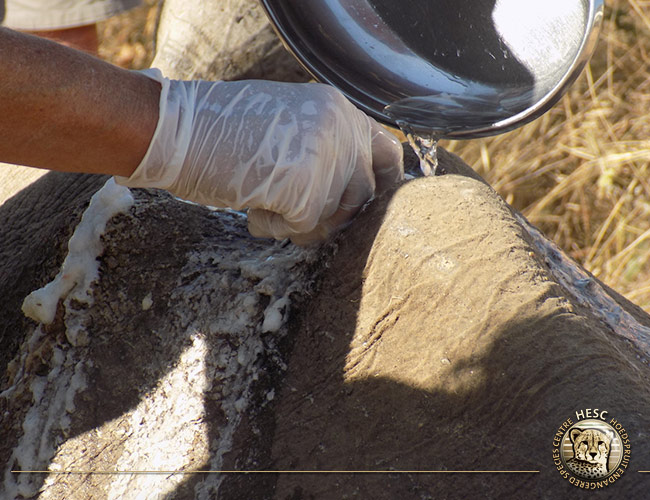 The wounds are treated 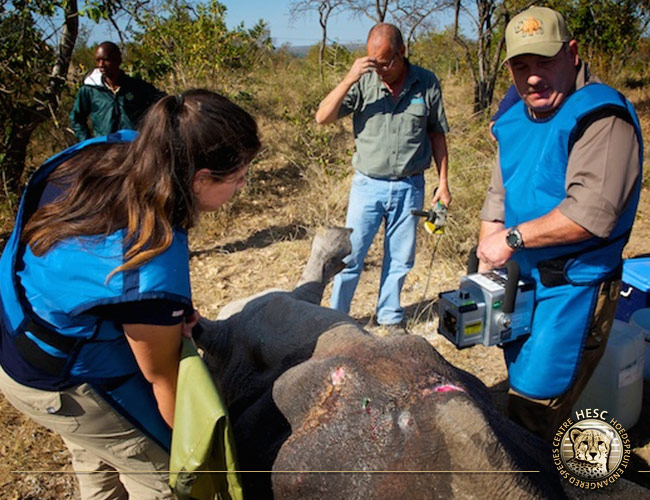 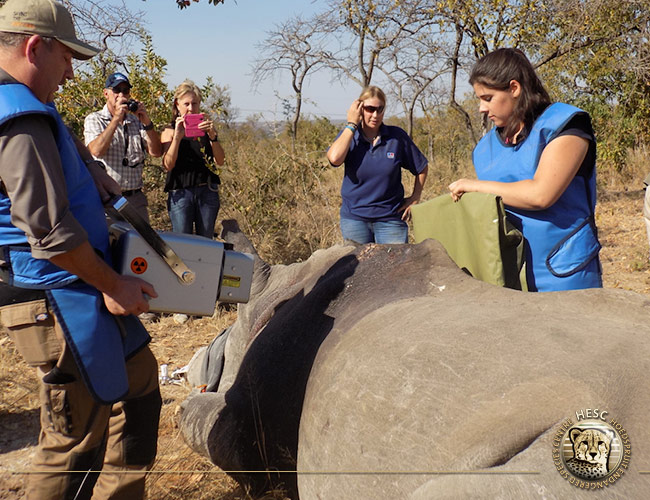 The bull’s wounds were disinfected with diluted chlorhexidine and hydrogen peroxide.  He was later given shots of antibiotics, vitamins and anti-inflammatories. There was an assumption made on social media, which we wish to set right – M99 was not used to sedate the rhino! 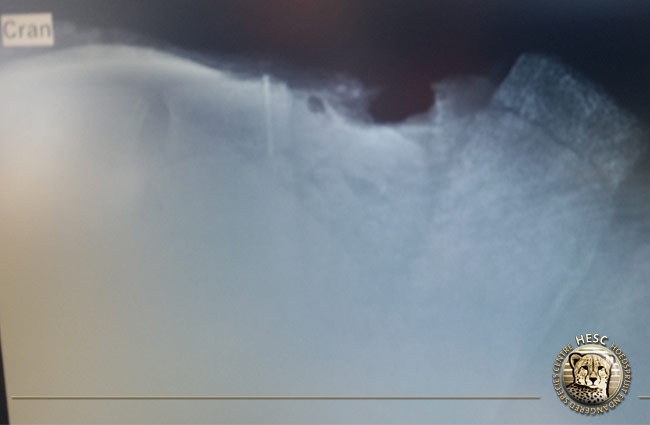 Following this procedure, the process of removing the rhino’s horn began. Janelle first used a permanent marker to indicate where the horn would be cut off, so as not to damage the rhino’s growth plate. The growth plate is similar to a nail bed. If one cuts too deep or into it, the nail might never grow back, causing severe damage. In the case of a rhino horn, cutting into the growth plate would mean damage to the nasal cavities (as we so clearly experienced with both Lion’s Den and Dingle Dell). 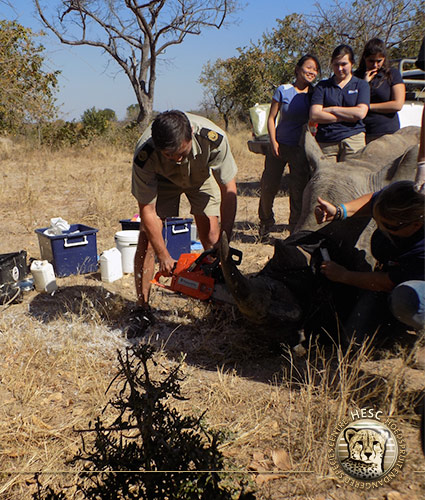 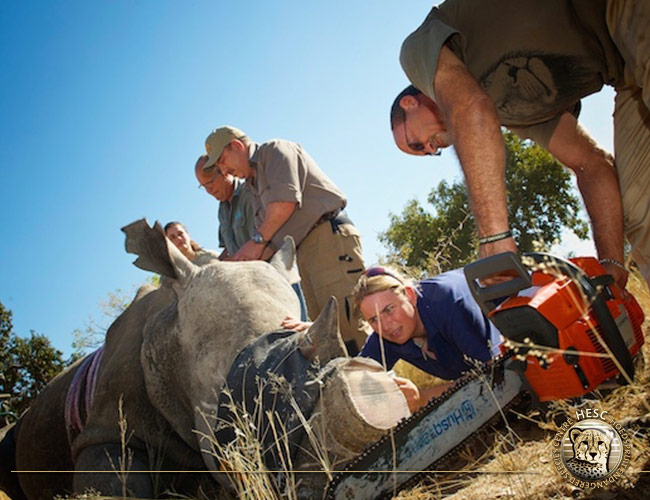 Basie with a chainsaw

Christo and Basie then took turns, using a chainsaw, to cut off the horn. Once removed, the horn was flown out of HESC by helicopter to Johannesburg for safekeeping. 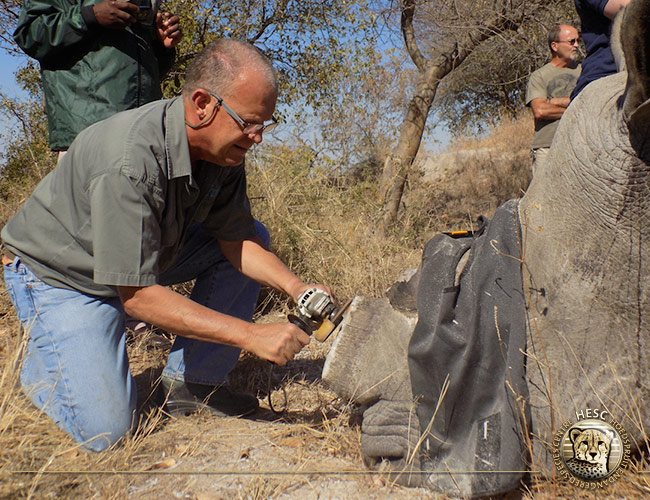 Many have asked if we burned or disposed of the horn.

According to the Threatened or Protected Species (TOPS) Regulations of 2007, one needs to have a valid permit to hunt, capture, kill, import, export, keep a rhino in captivity or even to possess a horn. The Convention on International Trade in Endangered Species (CITES) also demands proof of the legal acquisition of rhino horn. The horn must be weighed, measured, micro-chipped and registered by a conservation official.

Furthermore, it is unlawful to burn rhino horn or elephant tusks. HESC does not have stockpiles, nor do we own or keep any horns on our property.

As communicated, #72 had already been shot three times for his horn! Thankfully these attempts failed, but the risk to both him and anyone trying to protect him is obvious. The lengths that poachers will go to obtain their target are well documented. We need to protect this rhino, but we also need to reduce the risk to both him and to our staff in the process – especially considering the vulnerability we face as the result of not yet having a suitable security system in place. The best possible solution available to us was to remove the object that put us all at greatest risk.

Dr. Johan Marais and Rai Landau then took a series of x-rays of the wounds, using the Leonardo DR System from Germany, to determine the extent of the damage the bullets may have caused to #72. His hump had been shot away by the poachers, and during the course of the previous treatments, shattered bone mass was cleaned and cleared from the wound. Sadly the x-rays revealed two more fractures; one in front of the big wound by the spinal process, which has caused more fragments to occur. The other is in front of the first fracture, which might be possible to remove at a later stage. We hope that he has no more hidden bullets, as the x-ray can only detect about 40cm deep. 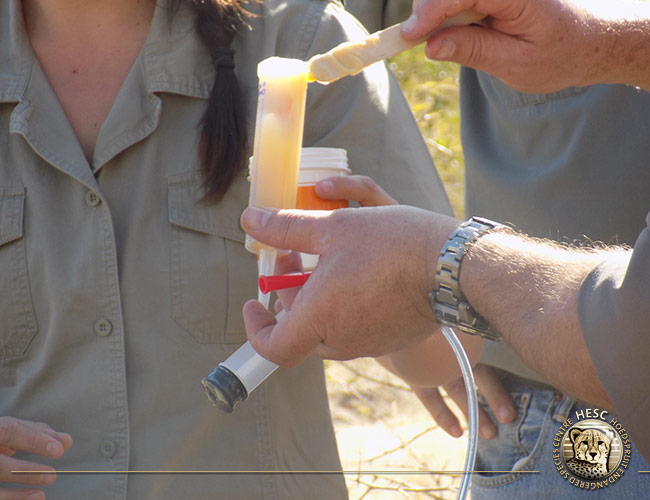 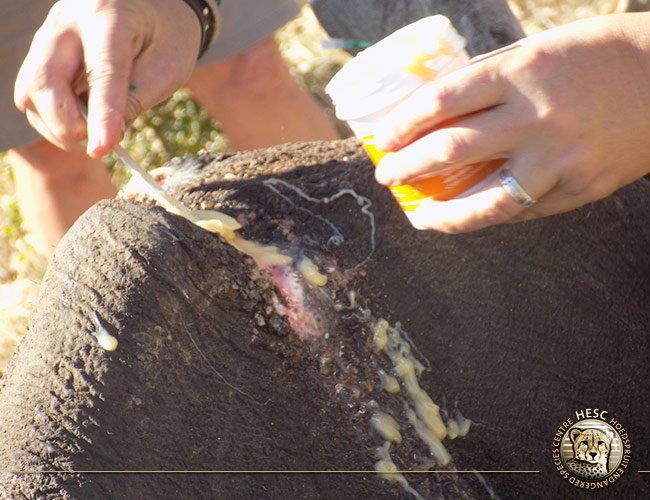 The rhino bull’s wounds were finally injected with medicinal honey. Honey is effective in wound deodorising and debridement, and has an anti-inflammatory effect in addition to stimulating new tissue growth.

Finaly #72 got a good scrubbing from our staff and the veterinary students, and was rinsed with water to keep him cool. He was then rotated from side to side to keep the blood circulating in his legs (a rhino cannot lie down for more than 20 minutes without moving – he runs the risk of not being able to stand up again). 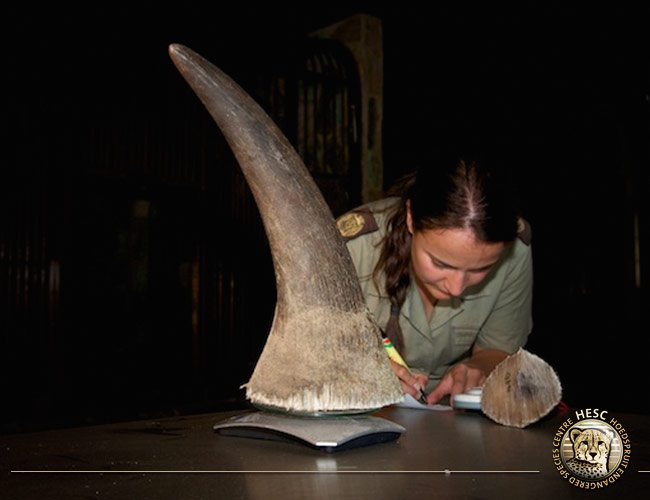 Horn being weighed, measured and captured

Putting #72 back into the wild will no longer be possible after having been de-horned, as rhinos use their horn for many things – including digging, fighting, self defence, sexual display and other social interactions. Being left without a horn would put him at a distinct disadvantage. But at least now he stays alive! 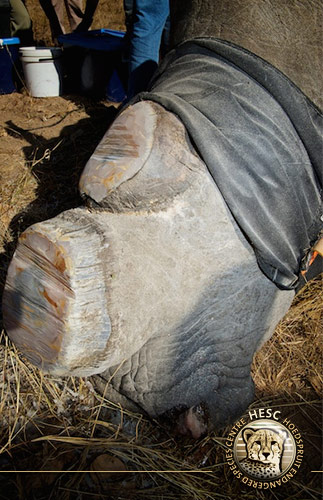 We have launched an incentive to name our #72. After the overwhelming surge of people asking for him to get his own personal name, coupled with the critical need to raise funds for a security system, we are inviting all interested parties to get involved.

All you have to do is visit https://help.hesc.co.za/rhino-sanctuary.php and choose from the options on the dropdown menu. You then pledge R100 towards the rhino, and leave your suggested name in the comment box in order to take part in the competition. The competition winner and the new name of the rhino will be announced on Friday 26 June 2015. 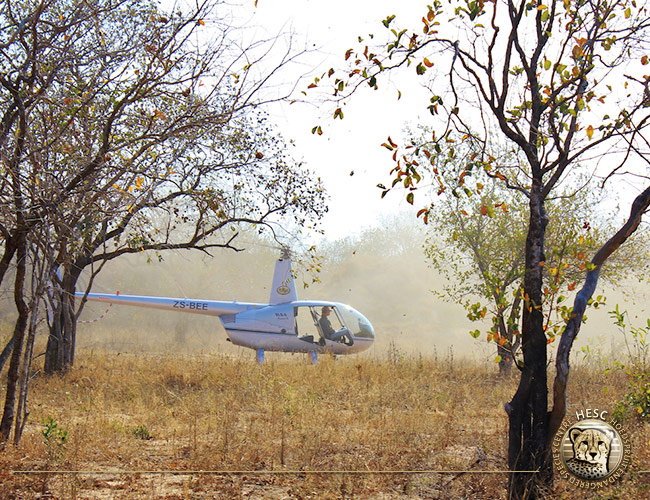 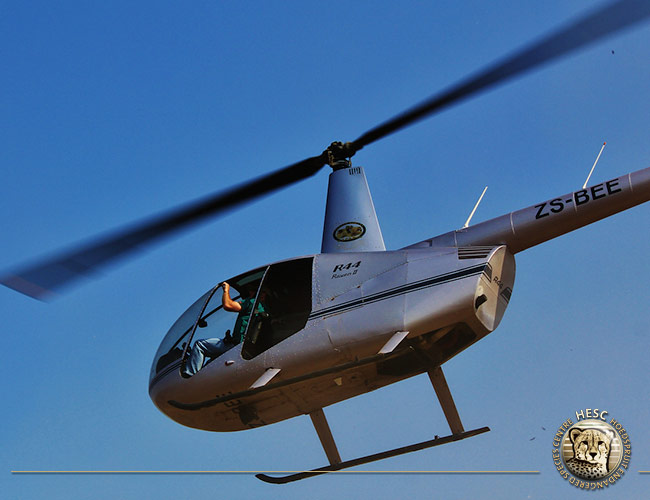