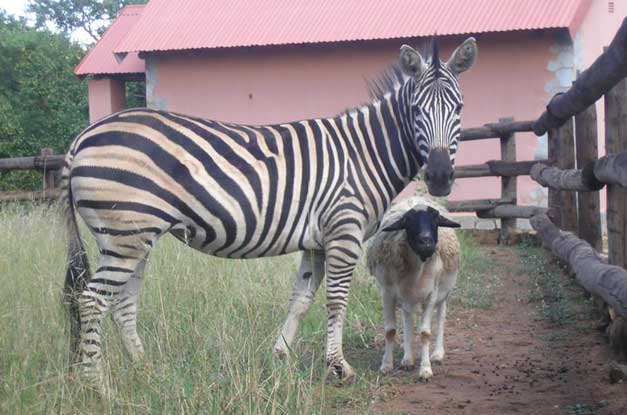 We’re very sad to announce that Heidi passed away recently.

After years of tireless service as a loving and caring surrogate mother to the many orphaned animals at the Centre (some of which were as much as eight times her size), this endearing and kindhearted sheep has finally left us in search of ‘greener pastures’.

Heidi helped us to raise a rhino, sable and zebra to adulthood.

It was always amazing to see how she would stand patiently by as Roger the rhino prodded her along, sometimes even pushing her to the ground in the process. She would just tolerate this ‘harassment’ until he got bored, and then she’d love him afterwards as if nothing had happened.

Zeta the zebra was the last in a long line of animals fortunate enough to be on the receiving end of Heidi’s gentle mothering.

The first signs that age was creeping up on Heidi became apparent when we did tours. She would just stand right in front of the vehicles and refuse to move out of the way. Zeta would then come and gently nudge Heidi off the road. It was really heartwarming to watch this daughter taking care of her aged surrogate mother.

After Heidi passed away, Zeta was very sad and walked around the whole Centre searching for her mother. She’s since joined up with our herd of nyalas and she is doing very well!

Heidi we will miss your kind and sweet hearted nature!

They came, they saw, they got their hands dirty

News from the Centre