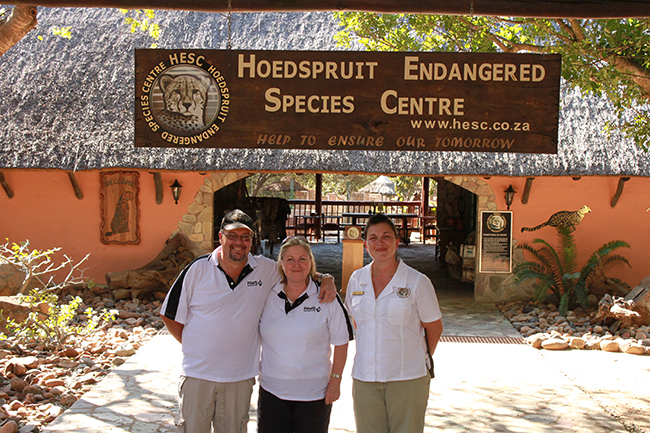 One of our recent donors is an organisation that needs little by way of introduction. The team at PAWS (Protect Africa’s Wildlife) has, at heart, the same interest as we do – the protection of Africa’s wildlife. They have a particular passion for doing whatever they can to curb the scourge of rhino poaching. We were so grateful when they recently paid us a visit to hand over a generous cheque towards our surviving rhinos, and other endangered species over which we are custodian.

For those not in the know, here is a little more information on this very worthy organisation:

Rhino poaching and wildlife losses have reached epidemic proportions, and PAWS is here to try and help. PAWS is a non-profit, non government assisted organization based in the Eastern Cape Province, South Africa. PAWS was formed in November 2011 in order to assist in the raising of funds towards the protection of Africa’s wildlife. The main focus of the foundation has been, in recent months, the supply of both funding and equipment i.e. rhino monitoring equipment as well as anti poaching equipment for various reserves in the Eastern Cape – South Africa. Past donations include R65 000, donated to Chipembere Rhino Foundation, equipment donated to anti-poaching units at Shamwari, Amakhala and Mpongo game reserves.

Our aim now is to continue supporting various anti poaching initiatives in South Africa. Poaching, not only that of rhino, has increased dramatically in recent years and we are committed to ensuring that this scourge is brought under control. We are also keenly aware that there is a desperate need for the creation of awareness in all age groups to the plight of Africa’s wildlife.

In addition to our commitment to anti poaching, we would like to emphasize to all the importance of the securing the future of Africa’s wildlife, in particular those species identified by CITES as vulnerable, endangered and critical. i.e. African Wild Dog, Cheetah, Rhino, Lion and many bird species. Without these creatures, Africa would certainly be a poorer place to exist.

By raising awareness, and securing the future of Africa’s wildlife, we firmly believe that we can make Africa a place where all would like to live and visit.

ONLY WITH THE SUPPORT OF CONCERNED INDIVIDUALS AND INDUSTRY CAN WE MAKE THIS VISION A REALITY. PLEASE HELP US SUPPORT THOSE THAT CANNOT HELP THEMSELVES

Our sincere thanks to PAWS for their generous support.

MaryJane moves to a new enclosure

Our resident cheetahs have a ‘bone to pick’