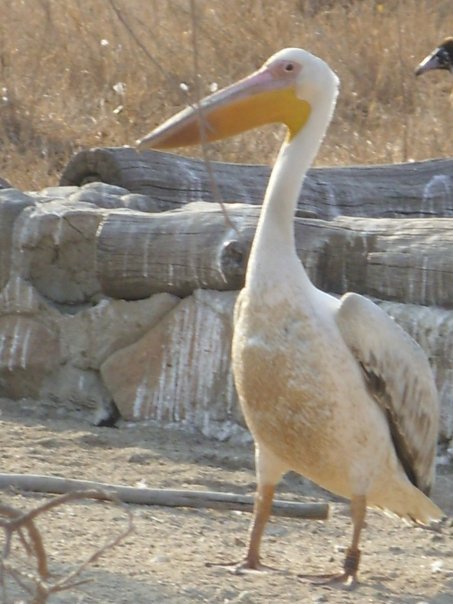 The great white pelican, or Pelecanus onocrotalus for all those latin speaking ornithologists, is most commonly found in Africa’s swamps and lakes. The most unique feature of this prehistoric bird is its huge bill, which has a pouch underneath it where it stores food. Although it’s found in many areas across east Africa, breeding usually only occurs on Lake Elementeita. During breeding season as many as 45,000 birds can crowd together on the water at any one time, which makes for an absolutely breathtaking sight.

The great white pelican is one of the largest flying birds in the world. It has a wingspan of nearly three meters and can weigh up to 10kg. And although it can be quite clumsy on land, on water and in the air it is nothing short of grace in motion.

Because of over fishing in certain areas white pelicans are forced to fly long distances to find food, which is more than likely how our visitor ended up at the centre.

Nothing goes to waste at HESC. The bones that aren’t eaten by the predators are collected and deposited in the ‘vulture restaurant’. This is a designated area where fresh meat, as well as carcasses of domestic livestock or wild mammals, is put out for vultures and other scavengers. These feeding areas contribute significantly to the survival of the birds, especially during periods of food scarcity or when young birds fledge.