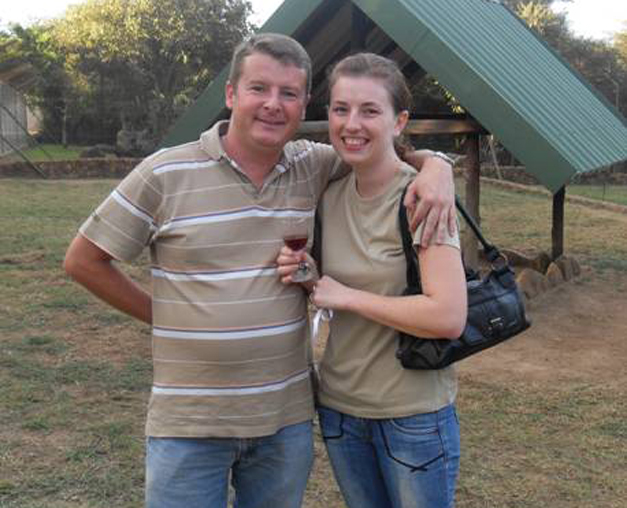 At HESC we’re always willing to go the extra mile, be that taking in an injured leopard or helping a dove with an dodgy wing. But as our name suggests, our main focus lies with endangered species. Although in this case the endangered species in question wasn’t of the four-legged variety.

It was the lesser spotted romantic male (of the human variety).

Yesterday Anton Weyers decided that he wanted to propose to his better half. He then called us to ask if we’d arrange a surprise engagement party for him.

We agreed, reasoning that since we deal with African predators on a daily basis, arranging an engagement party should be a walk in the bush.

The HESC staff immediately jumped into action, organising a private game vehicle, venue, and accommodation. And all within the prescribed timeframe. Whew.

Anton complimented us afterwards on our creativity and resourcefulness, saying that everything was a far greater success than than it would have been had he undertaken the task himself. Our awesome team succeeded in pulling off the event right down to the finest detail, and all without his new fiancé suspecting anything.

“Sacrificing their own time to accommodate our engagement, stretching their resources to the limit, personally participating in the element of surprise. I would like to thank everyone for transforming our engagement an extraordinary affair, and creating a “once in a lifetime” opportunity for me to express my love and appreciation for my very special, very beloved Helanie,” said an elated Anton after he cracked the nod from the lady of the moment.

We in turn were over the moon at being able to help him bowl his wife to be over. Knowing that we’d in some way added to the couple’s treasure of unforgettable memories made all the hard work worthwhile.

As an added bonus their engagement was published in the Browns Jewelry July 2011 newsletter, and included some of the pictures that Gretha took of the magical occasion.

Karen Swiegers is promoted to General Manager at HESC

Leopard arrives at HESC after being caught by a farmer