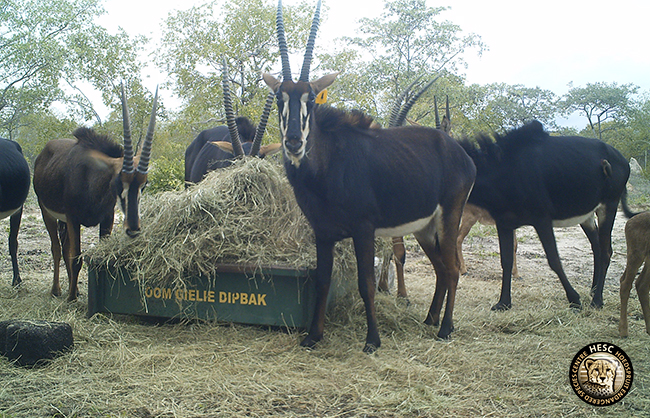 Over the last month and half, the HESC curators have been busy at work taking care of Amanzi (the orphaned baby elephant who sadly did not make it) and the orphaned rhinos. But of course we could never forget about all the other animal residents at the centre, and we thought we would bring you an update on all the behind-the-scenes action that has been taking place over the month of February, and March to date. 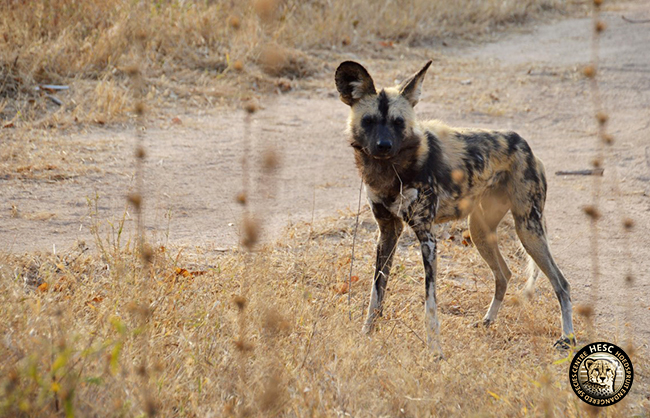 We unfortunately lost one male wild dog from our pack on the 21st February due to a snake bite. The curators found him dead in the wild dog enclosure, and an autopsy was performed by Provet in order to establish the cause of death. A quick result is imperative, as disease could threaten all of the wild dogs in the pack (and the rest of the carnivores at the centre), necessitating immediate precautionary action. Fortunately this was ruled out in the diagnosis, and the dog’s death was an unfortunate incident which is sadly quite common in the wild. 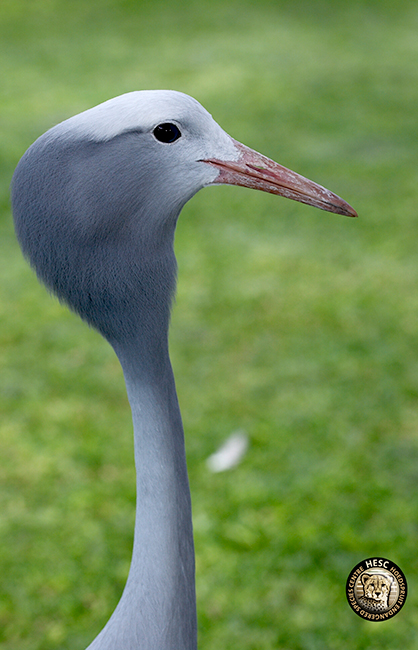 The sometimes cruel hand of Nature stepped in when a Marshall eagle caught one of our resident Blue cranes on the 5th of March. The eagle did not fly off with its prey, as it must have been disturbed during the attack. But unfortunately the Blue crane did not survive the attack.

The Blue crane is listed in the IUCN 2010 and the South African Red Data book as vulnerable.

The unfortunate accidental poisoning of this magnificent species still occasionally occurs due to grain being soaked in agrochemicals for the capture of wildlife for food, although cranes are not usually the primary target species. Cranes are social birds and gather in flocks, therefore poisoning incidents sadly often involve a number of individuals.

Shelly, one of our resident cheetahs, gave birth to 4 cubs on the 22nd of February. The cubs are starting to explore their enclosure and move out of the maternity hut, but Shelly is quick to return them to the protection of the enclosed space. 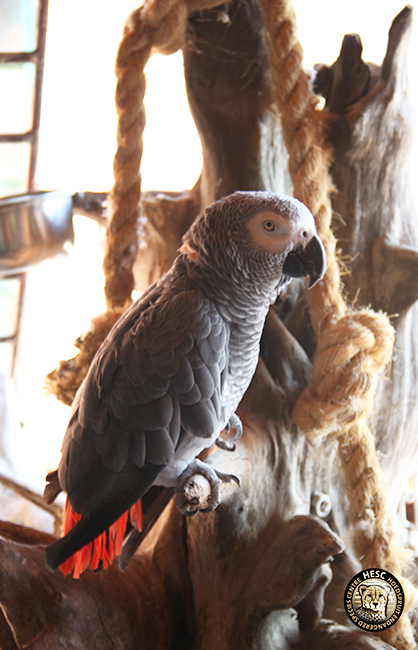 Koos, our resident African grey parrot, recently fell ill. Our curators took him to Provet to take a look at him. The poor bird was diagnosed with pneumonia, and prescribed a course of antibiotics. We are happy to report that our feathered friend is well again, and happily chatting to visitors from his post on the verandah. 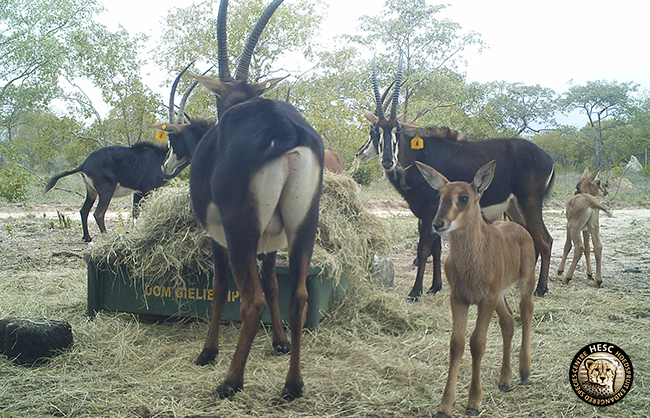 Three sable calves were born at HESC and spotted on the 2nd of March 2016. Over the years the sable population has dropped drastically in the area, as they were poached or caught by predators like lions, hyenas, wild dogs and leopards. 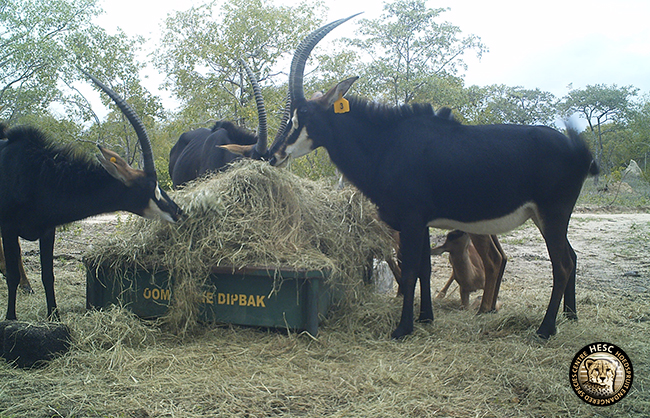 In some areas, breeding females give birth during a two-month period, the timing of which changes slightly from year to year. When ready to give birth, the female, often in the company of several other pregnant females, leaves the herd and seeks a secluded place in the bush. After birth she leaves the calf hidden in the tall grass or bush, returning once or twice a day to suckle the infant. After a couple of weeks, when the calf is strong enough, she takes it back to the herd. As the calves obtain adult coloration, the territorial males and the females push the young males from the herd. The young females remain, taking their place at the bottom of the hierarchy.

The Eagle owl which we rescued and rehabilitated gave birth to two beautiful chicks, both of which grew to maturity and were released. A few pesky monkeys were recently annoying the Eagle owl, and she sadly flew away. Although we didn’t get to say our goodbyes, we have no doubt that she will find a new comfortable nest in her natural habitat, as it should be. 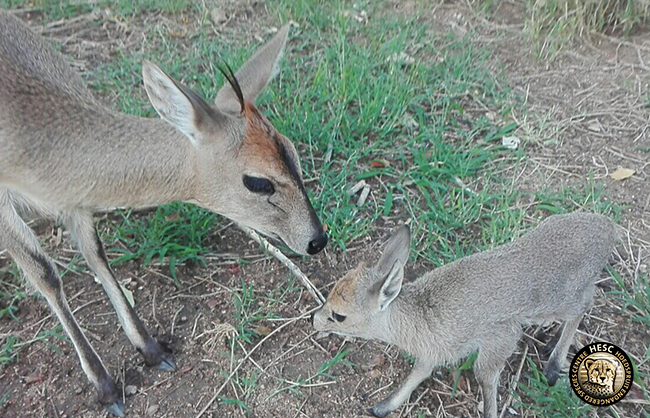 On the 10th of March during their early morning check-ups, the curators found a baby duiker in the clutches of a Tawney eagle. The eagle dropped its prey and the curators went in for the rescue. The small duiker is a female of a mere 1kg, and although she took some time to take to the bottle, she now can’t get enough of it. Although internal injuries cannot be completely ruled out, the young antelope appears to be strengthening day by day. 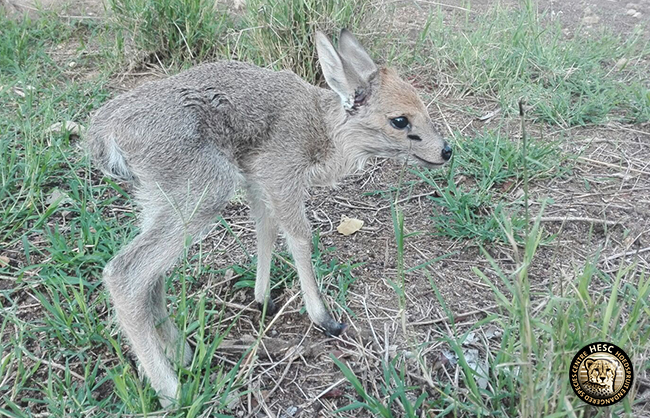 During the day, the baby ewe joins Bokkie Bok in his enclosure. Naturally Bokkie Bok is extremely glad to have a new playmate, and runs circles around the youngster. Watch clip below.

Professor Kriek and Christo Schreiber (head Curator) attended the Endangered Wildlife Trust (EWT) meeting on the 10th of March. We wish Vincent van der Merwe all the best with his move to the Cape, and look forward to working with Grant Beverley who will step in to Vincent’s position as the cheetah meta-population coordinator.

We look forward to another busy couple of months ahead,

Mount Kilimanjaro – Climb for a Cause