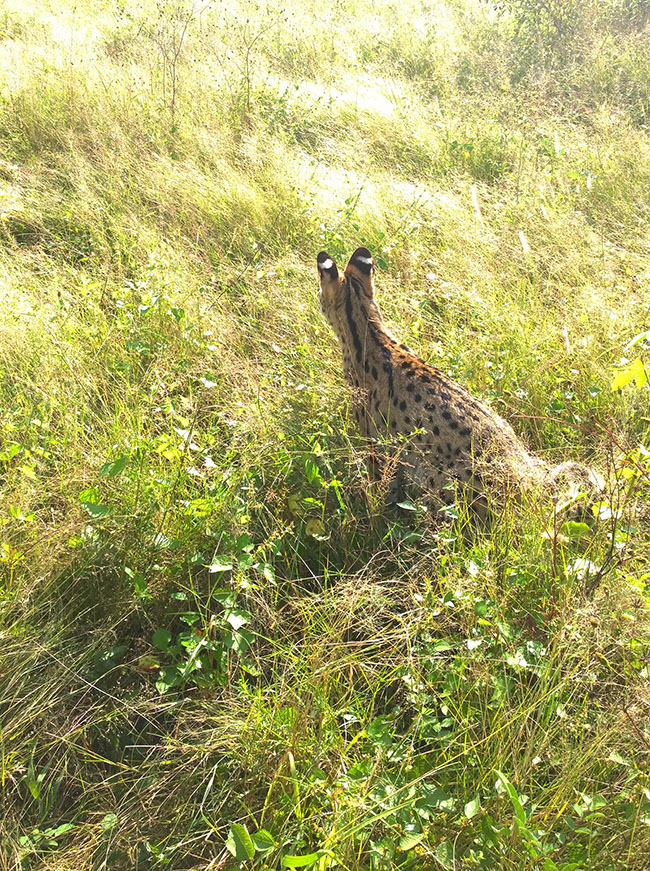 Since the Centre opened its doors, we have seen many animals successfully released. Some of these releases involve a crate door being opened with the animal running off into the wild – people watching excitedly and journalists snapping photos! Other releases are quieter, requiring a little more time, and a little more patience. This is the case with Bubbles the serval.

Bubbles was brought to HESC on 20 June 2013.  During a veld fire, her mother tried to cross a road with her kitten, but was unfortunately hit by a car, leaving a young Bubbles, who was about 4 weeks old at the time, stranded in the road. Mr Pieter Strauss picked up the baby serval. Knowing that this wild animal required specialised care, he decided to call the HESC for help. 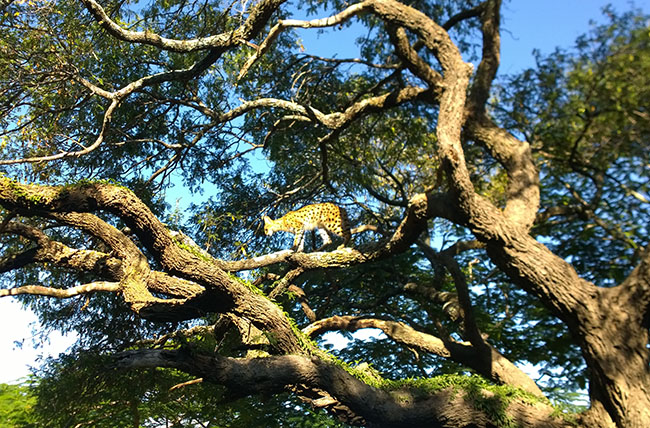 Stuck in a tree

Without a serval mother to look after her, Bubbles was hand-raised by the HESC staff. The hope of her ever being released was slim, because she was so tame. However, with the help of our assistant curator, Karien Smit, Bubbles is now running free!

Here is Karien’s update on Bubbles:

In December 2013, Bubbles was moved into a camp with a male serval, named Kuile, for possible bonding.  The bonding was, however, unsuccessful due to Kuile’s aggression towards her and they were placed in adjacent camps for safety.  In March 2014 the centre received another two serval kittens (approximately 7 weeks old), this time from Piet Retief.  They were held in a temporary enclosure close to Bubbles’ camp.  They could see her through the fence, and although very curious, they never dared to go too close.

The kittens were soon moved to an enclosure away from the activities of the centre (to avoid human imprinting) and Bubbles joined them as their new neighbour and eventually as babysitter!  They gradually warmed up to her and in the end the 3 were happily sharing the same space.  I often allowed the kittens to play outside the enclosure to improve their fitness levels and ‘bush skills.’  They had a blast sprinting down the lawn, climbing up trees and stalking one another, and Bubbles soon joined in the fun and games!

One day, she climbed up a tree with such excitement that she underestimated the size of the tree!  She tried desperately to find a branch that is low enough to the ground to jump from, but with no luck at all.  Even my coaxing and calling didn’t do the trick!  Minutes later, Kobus – one of our guides, drove past the struggling Bubbles and was eager to climb the tree to show her the best route down.  She accepted Kobus’ assistance and soon made her way down to lower branches until she could safely jump to the ground.  With a sigh of relief I briefly thanked Kobus and turned around to escort her to her enclosure, only to find her up in another tree! 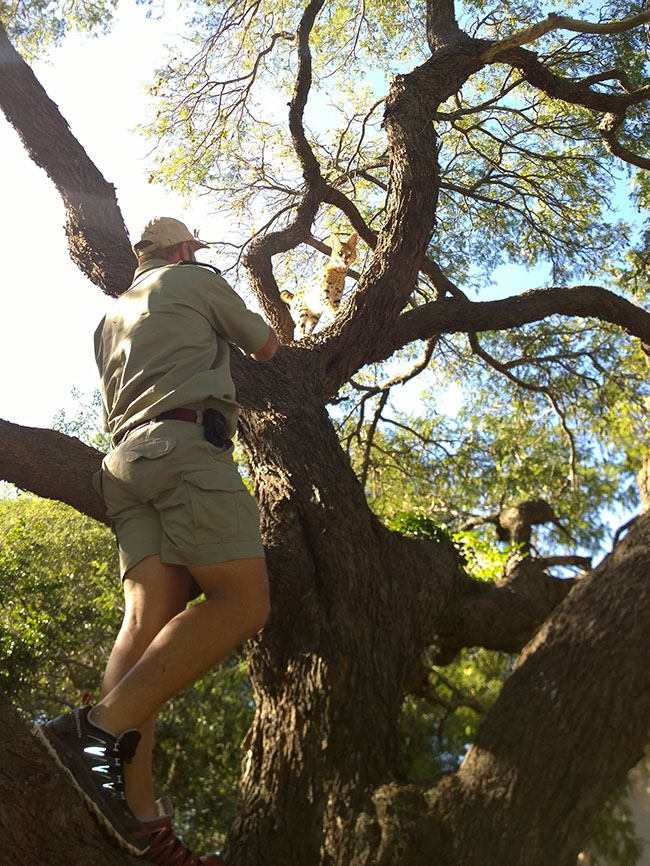 Kobus to the rescue

With impressive skill and balance she explored every branch – sometimes twice, to find a suitable way down, but yet again her courage forsake her and she found herself panicking and breathless.  This tree, however was a lot trickier to conquer since it branched out into smaller and smaller twigs with leaves covering the branches like a blanket.  On one occasion I only saw hind legs dangling from the leaves while she was hanging on with her front claws, not daring to let go!  Luckily, smaller branches means they are more flexible and I managed to pull a few branches towards the ground, from where she easily jumped to safety and happily followed me (this time) to her enclosure for a well-deserved meal. 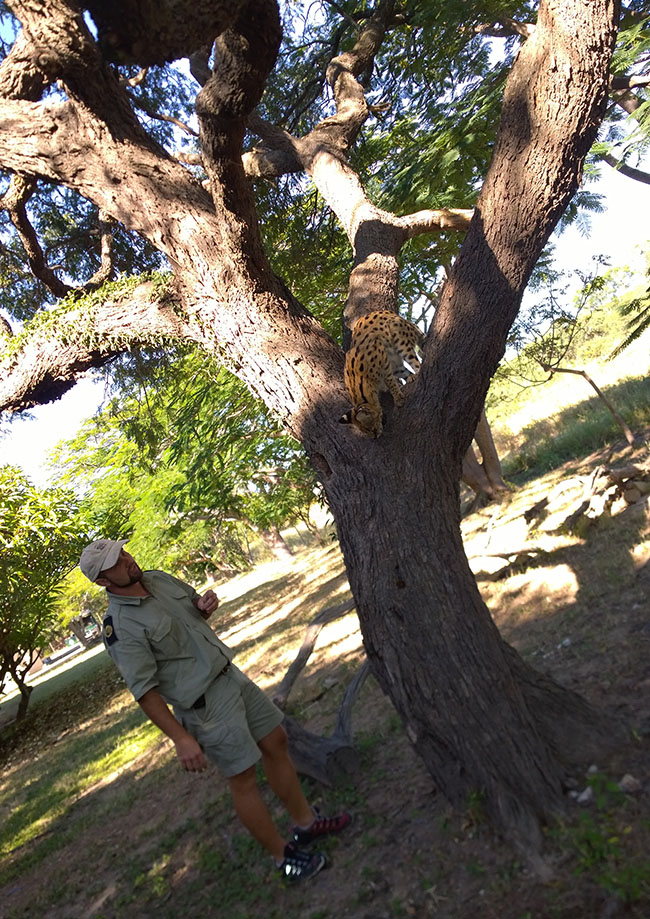 On her way down

The kittens were then moved to a new area from where they will eventually be released, but unfortunately Bubbles could not join them due to her age (she was already at the age when servals would go off on their own whereas the kittens still needed another 8 months to mature).  I continued to let Bubbles explore the ‘big 5’ bush around her enclosure, and as her fitness level (and tree climbing skills) improved, her expeditions lasted longer and longer.  First she would stay away for a few hours, then a day, and then even a few days!  At one stage she was ‘gone’ for a full 10 days before she eventually came back for a proper meal – and might I add, she still looked very healthy for being off on her own for such a long time!  No signs of dehydration or emaciation, which meant that she surely knew how to find a snack or two!

Bubbles is now fully released although she still keeps close to her enclosure and feeding spot.  She happily appears from the bush when I feed the other animals – and of course she gets a tasty snack as well! 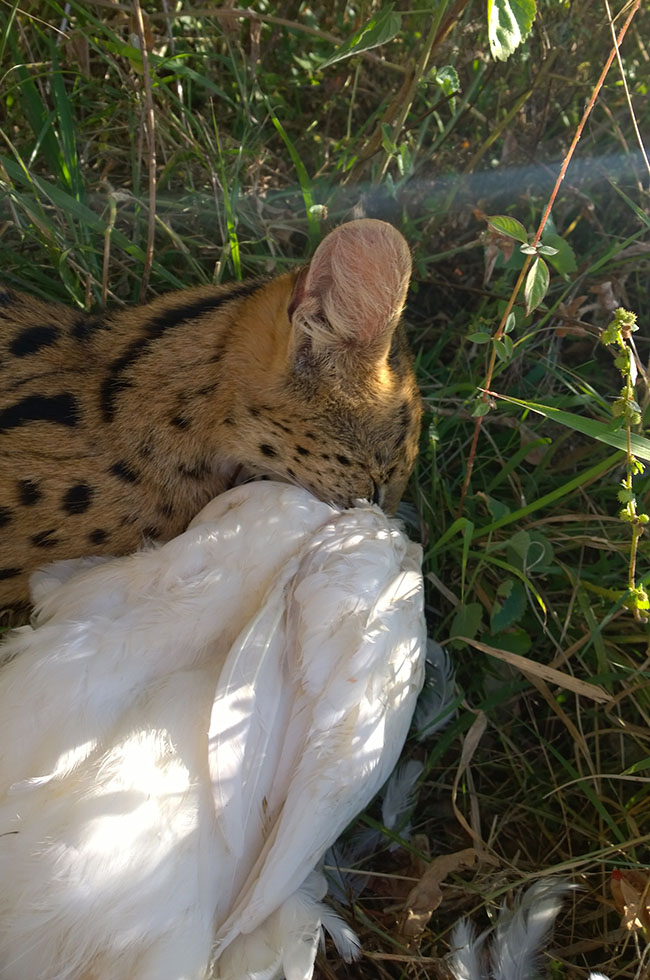 On her way down