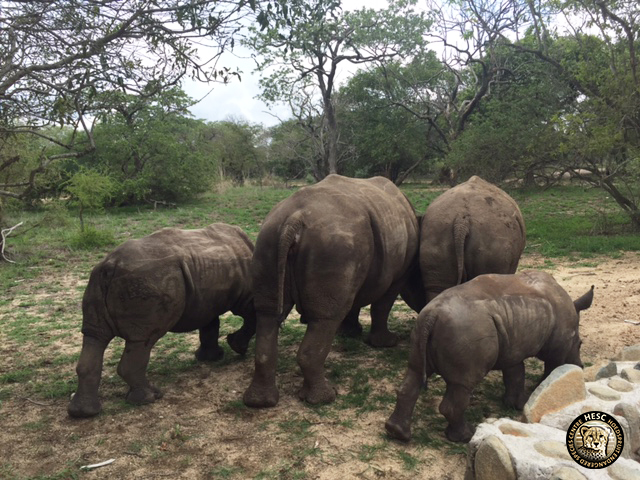 We are happy with the progress that our orphaned rhinos are making, and bring you an update on their last two months at HESC.

At the beginning of February Balu was consuming a total of 20.5L of milk formula per day, and weighed 135kg. By the end of the month, his feed had been increased to 6L of milk formula four times a day (24L per day) and his weight had escalated to 158kg – almost 20kgs in just 29 days! 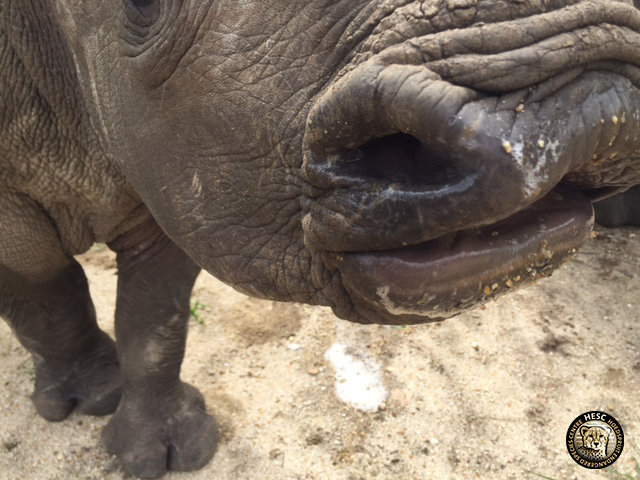 Since Balu and Stompie are getting bigger, we thought it was time for them both to handle longer daily walks. We let them out of their boma area so they could roam around the centre (naturally they were closely followed and monitored by one of our curators). Clever they are, as they managed to walk back to the boma of their own accord – just in time for their next feed!

On the second day they were let out of the boma area, Stompie and Balu played around for a bit before Stompie found himself a shady area under a tree for a nap. Of course, Balu was quick to follow suit. 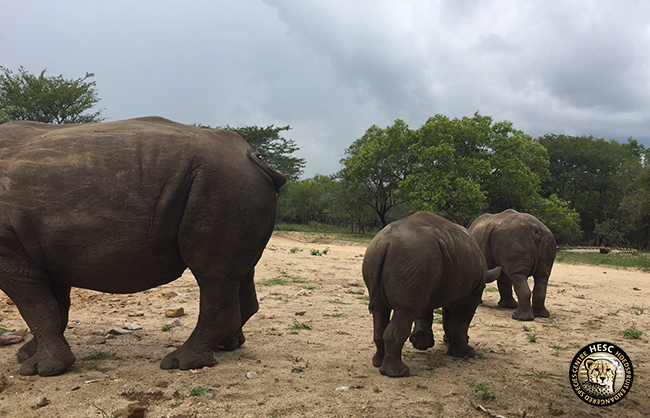 We’re happy to report that all four orphans are now completely comfortable in one another’s space. On one particular afternoon in February, we found Gertjie, Matimba, Stompie and Balu enjoying an afternoon nap together close to the vulture restaurant.

Although Balu enjoys the company of both Gertjie and Matimba, he still keeps a safe distance as they are much bigger than he is. But he’s emotionally attached to Stompie, and is always found at his side. We’re extremely proud of how protective and caring Stompie is towards Balu. 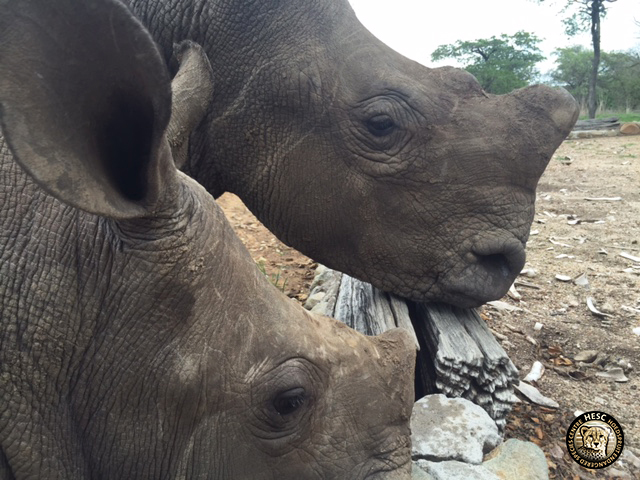 On the 1st of March Balu turned 4 months old. He was still being fed four times a day (while Stompie is down to three feeds). He seems to enjoy the weigh-in process and now walks onto the scale all by himself without the enticement of a bottle. He’s also picking up weight nicely, and by the first week of March weighed a healthy 175kg. He is a ball of energy and is showing signs of enjoying being in charge – he makes sure he’s always in front of Stompie.

The dam at HESC has been filled after the late March rains and Balu and Stompie have found themselves a favourite spot for their afternoon play sessions. The dam is quite deep at one end, and Balu learned this the hard way when had to quickly run out to catch his breath after venturing too far into the water. He is still weary during mud baths when Gertjie and Matimba are around because he’s smaller than they are. He also tries to play with the sheep, although he still seems to be a little afraid of it.

Matimba
Early last month, Matimba’s daily milk intake was reduced from 8L to 7.5L. He is getting used to less formula, and heads straight to the lucerne the moment he finishes his milk. 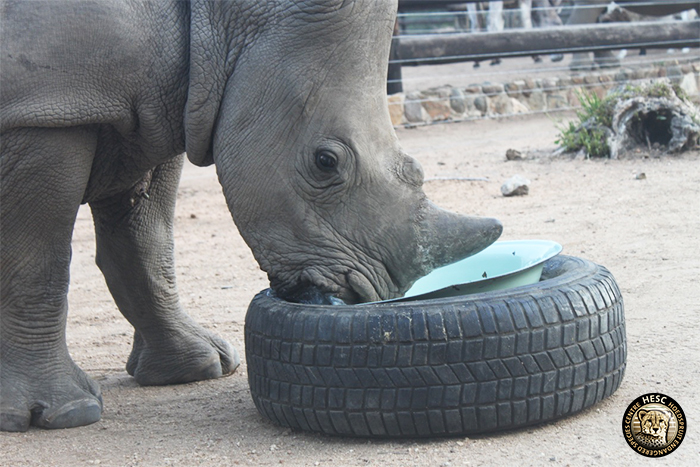 Gertjie and Matimba are both in a routine, and instinctively return to the boma on time at about 6pm every day. The fact that this coincides with Matimba’s daily bottle probably has something to do with their punctuality!

It is wonderful to see Lammie back with her boys, grazing at their side. 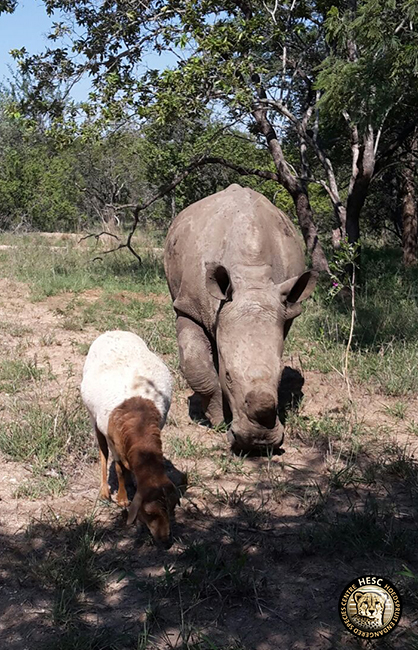 At the beginning of February, Stompie was being fed 25L of milk formula a day (split into four daily feeds), and weighed 390kg. He picked up weight quite quickly, as by mid-February he clocked in at 410kg. By mid March, he came in at 426kg! He’s now officially too heavy for our scale. 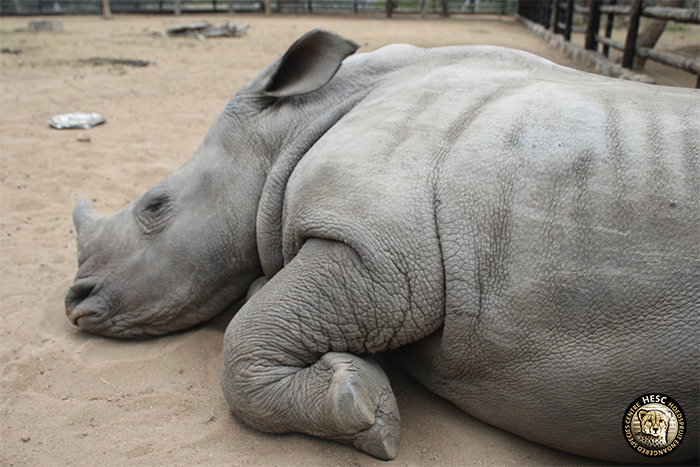 By the end of February, his milk feeds had been slightly reduced to 5.5L per bottle four times a day. He is getting strong, and proves this by playfully roughing Gertjie up every now and then.

In mid-March we reduced his feed even further to a daily total of 19.5L of milk formula (split into three daily feeds). At first he wasn’t too thrilled with the fact that Balu still got a 9am bottle while he had to wait for the next feed, but he quickly got used to the new arrangement. 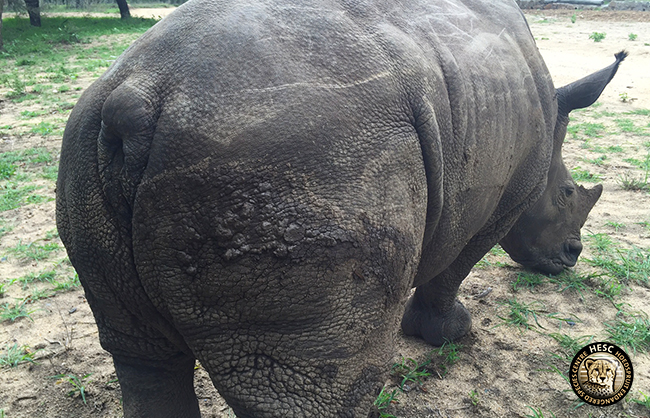 Stompie loves his naps, probably as much as he loves his morning mud bath which he enjoys with his ‘shadow’ Balu!

Although we don’t know Stompie’s exact date of birth, we are keeping track of his age based on his date of arrival at HESC and his estimated age at that point. Based on this, we celebrated his 1st birthday on 10th March. 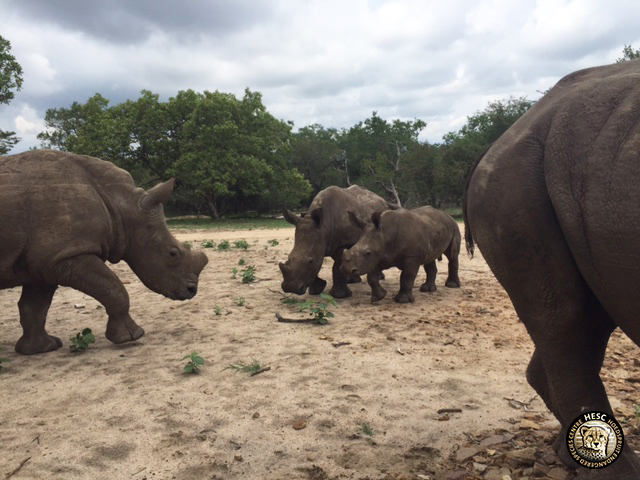 Matimba going towards Stompie and Balu

Interestingly, as Stompie continues to grow he’s becoming a little lazy, and now usually walks behind Balu. But let’s give him the benefit of the doubt … this could also be his strategy for protecting his young sibling. Stompie and Balu share a beautiful bond which gets stronger with every passing day. Despite his initial resistance, Stompie has learned to trust Gertjie and Matimba, and is now very relaxed around them too.

Gertjie is our gentle sweetheart. When we first let Stompie and Balu out of the boma area to roam in the centre, Stompie saw Gertjie and charged at him. Fortunately Gertjie wasn’t remotely perturbed and remained calm – simply standing for a moment before walking away. 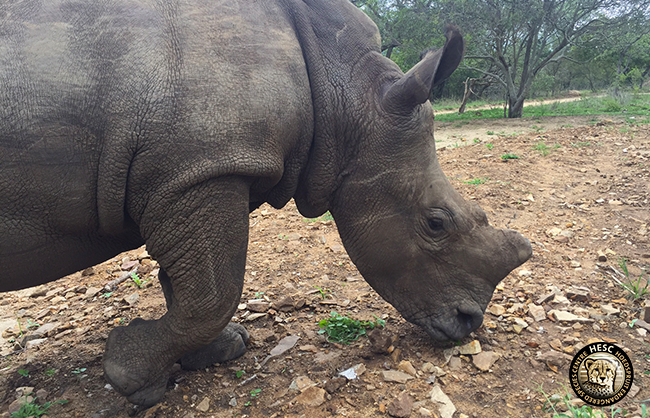 A few nights later, Gertjie and Matimba broke through the wooden fence between theirs and Stompie and Balu’s boma. We were so thrilled at this natural progression that we left them to spend the night in one another’s company. We found all four cuddled up together when we went to check on them the next morning. Gertjie is a very special rhino – he’s very protective and loving towards his three younger ‘brothers’. 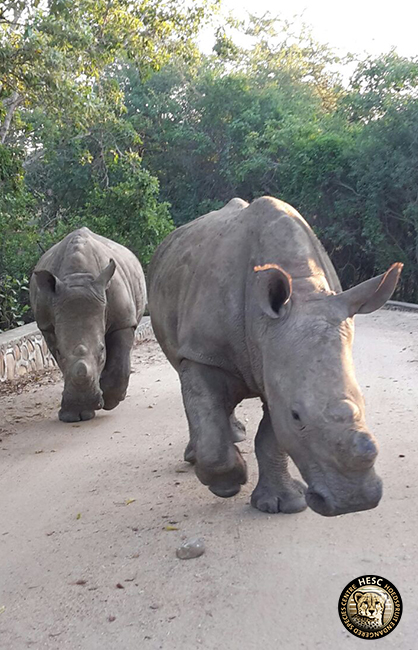 Although Gertjie and Matimba spend more time with Stompie and Balu, they still enjoy each other’s company without the babies. They’ll sometimes return to their boma a little earlier to take a dip in the mud bath without the other two. 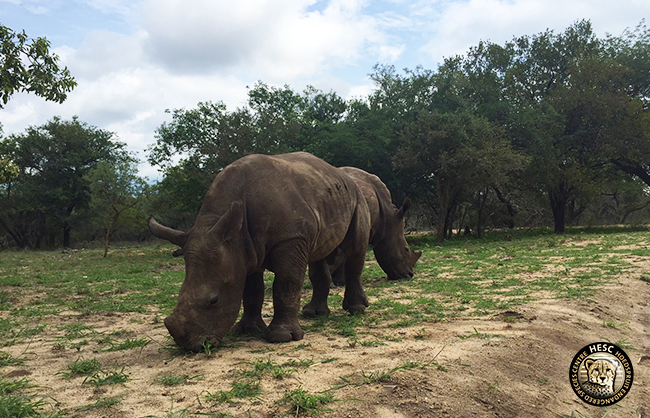