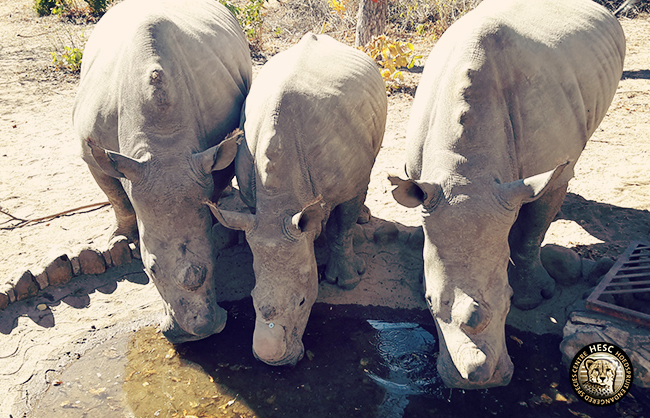 We’re very fond of our rhinos here at HESC, and think it’s time we shared their latest quirks and stories with you. A lot has been happening!
Olivia, Khulula and Nhlanhla
They may still be babies – but they’re BIG babies! Just to give you an idea: Khulula is now too big for our scale, so we can’t weigh her anymore. Nhlanhla weighed 108kg at his mid-July weighing, and his milk has been increased to 3.2 litres per feeding, 5 times a day. It is really impressive how this baby is getting bigger by the day! 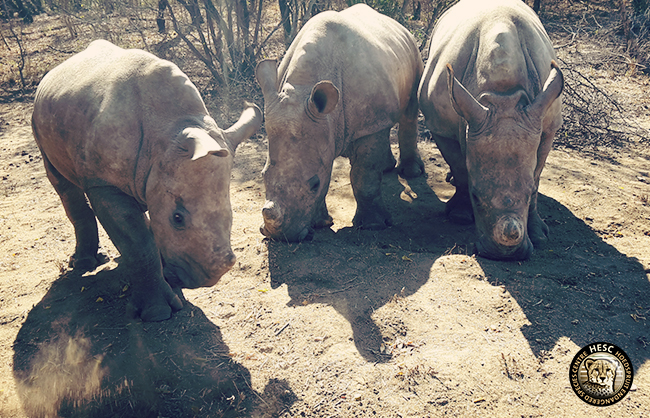 At the beginning of July, Olivia and Khulula’s feedings were decreased from six to five times per day, and their milk to 5 litres per feed. By mid-July both rhino sisters were drinking 4.8 litres of milk per feed.
Khulula, Olivia and Nhlanhla spend a great deal of time playing and exploring their surroundings. Like all children, they take well-deserved afternoon naps once they have their midday feed and are tired from all their antics! 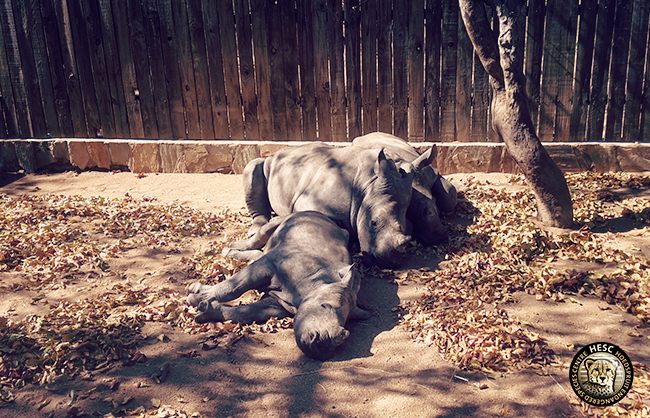 Khulula and Olivia seem to have formed a special “sisterhood” bond that’s going to last for a very long time. They love playing with each other.
In mid-July, Nhlanhla had a slight attack of diarrhoea. Dr Rogers came to treat him, and administered a drip, antibiotics and vitamins. He also took blood and stool samples for testing. He advised that we change Nhlanhla’s bottle feed to every 2 hours, and give him 2.6 litres per feed.
A few days after Nhlanhla’s treatment, Dr Rogers returned for a follow-up treatment, and gave him vitamins and steroids in the hope that this would help to stop the diarrhoea. His milk feeds were also changed to 3-hour intervals. 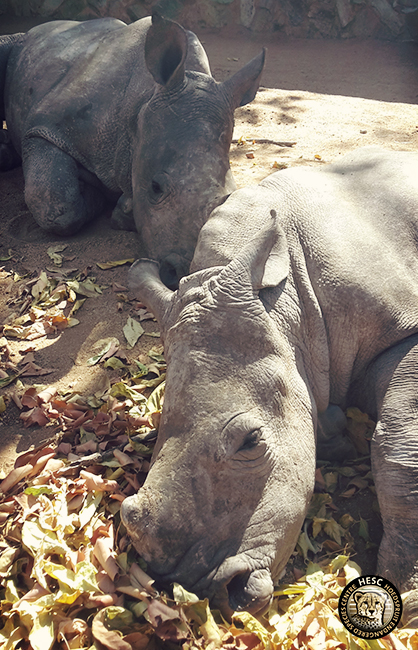 Although Nhlanhla’s health continues to improve, we are still keeping a very close eye on him. He has someone watching him throughout the day. Everyone at the centre enjoys seeing Baby N running up and down as he tries to encourage his sisters to play along.
Both Khulula and Baby N are fond of their big sister and always make sure that they are close to her. Whenever Khulula gets a fright she usually just looks over to Olivia to see her reaction and for some reassurance. Olivia seems to enjoy the ‘big sister’ role. She is always the leader and whenever she is too tired to walk around, she will call the other two so they can all start making their way back to the boma. She really is a very special rhino.
Lion’s Den, Dingle Dell and Philippa
Philippa is doing very well! She had no scheduled treatment procedures in July. We still kept a close watch over her just in case her wound cover came off. On 4 August she had what we hope will have been her last treatment. Click here to read about it. 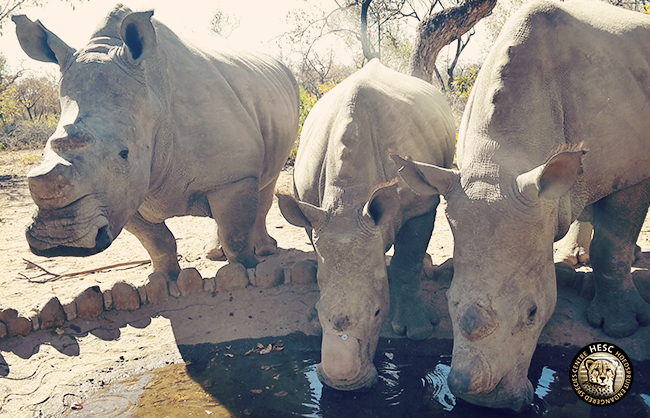 Lion’s Den and Dingle Dell are also doing great. These two sisters love their lucerne and never hesitate when it’s feeding time.
The three rhinos surprised the curators when they came up to the waterhole for a drink while the curators were still filling it up with water. However, they made sure that they kept their distance and would glance up every now and then to make sure the curators were not getting too close to them. Philippa stayed between her big sisters the entire time.
Stompie and Balu
Stompie is growing really fast. His milk was decreased from 6 litres per feed to 5 litres, twice a day, at the beginning of July. His companion, Balu, was still getting fed 6.5 litres of milk, three times a day. Balu seemed pleased that he was getting more milk than his brother, and would rub it in by taking longer to finish his bottle! 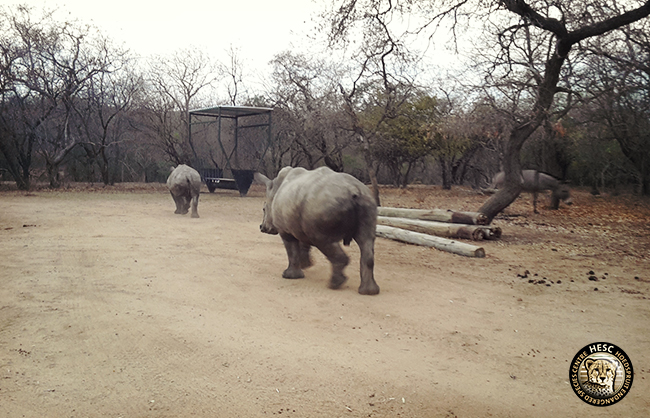 By mid-month Stompie’s milk feed changed to 8 litres of milk, once a day. Balu’s milk was decreased to 6 litres. The baby seemed to notice that he was finishing his milk quicker – after each bottle feed, you could hear him asking for more. And when we wouldn’t give him more, he’d give a loud screech to voice his displeasure! But then he would realise that there was some yummy lucerne to eat, and his mood would immediately switch to a happy one.
The two brothers are both doing really well. They are clever and learn very quickly. For example, they picked up that the sables weren’t finishing their lucerne overnight. So in the mornings, when the curators opened up for them, they would quickly make their way to the feeding spot to finish off the sables’ leftover dinner!
Gertjie and Matimba
Gertjie and Matimba are enjoying their new enclosure, and are still as close as ever. The two brothers also share their big enclosure, and food, with the sables and ostriches, who are old friends of the pair. 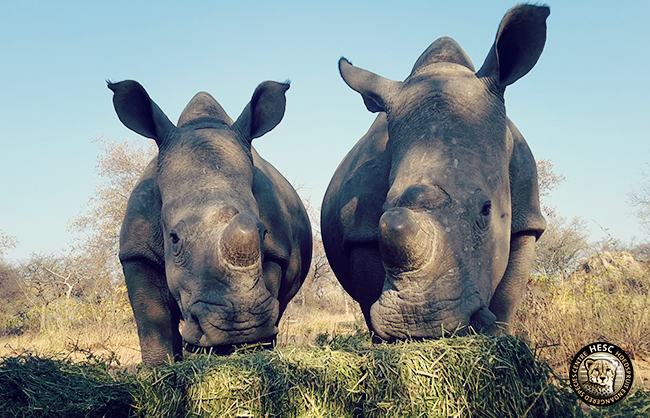 These ‘naughty boys’ sometimes show off to guests during tours and playfully try to scratch the vehicles as they pass by. Our guests are always amazed by their incredible story, and how inseparable they are.
If you can and would like to make a donation towards the Rescued Rhinos @ HESC sanctuary, visit our online portal. Alternatively go to PayPal, click on ‘send’, add the WCT email address accounts@wildlifeconservationtrust.co.za, choose the amount you’d like to contribute and click ‘continue’.