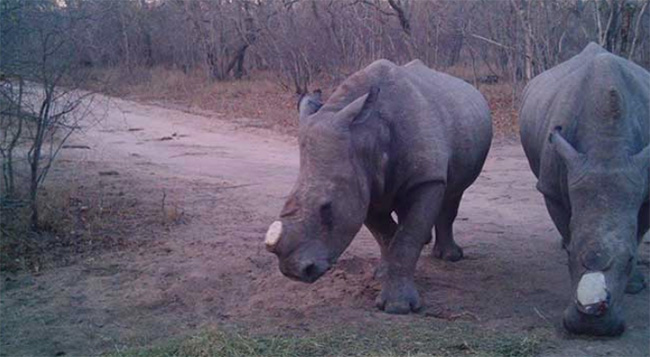 In this account, HESC veterinarian Nina Kisch gives us an update on how the two rhinos are doing. They were brought to the Centre after being brutally mauled by poachers at the end of August 2013. 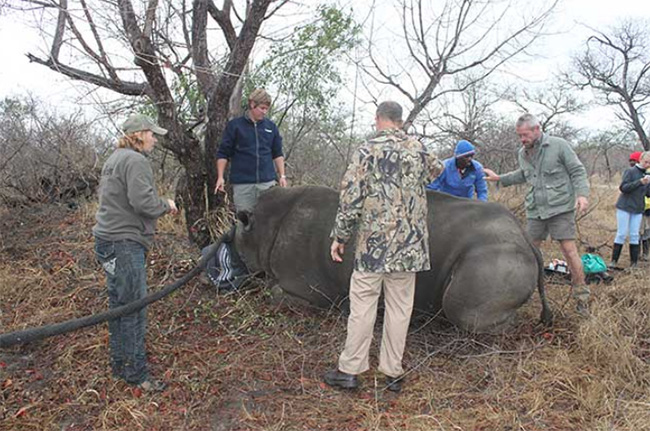 Thankfully the treatment protocol that Dr. Johan Marais and Dr. Gerhard Steenkamp are following with the two poached rhinos appears to be working. This primarily involves ensuring that the wounds remain clean and uninfected, with no access for flies and maggots. This, in turn, stimulates the formation of healthy healing granulation tissue to seal off the sinus cavities, and prevents the wounds from becoming contaminated with mud, leaves and other irritants. 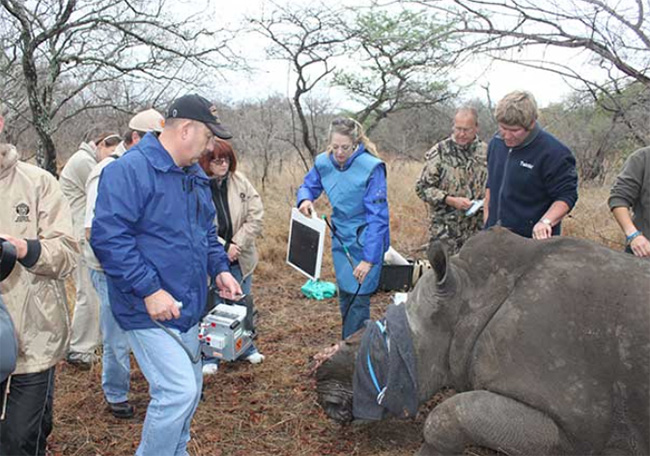 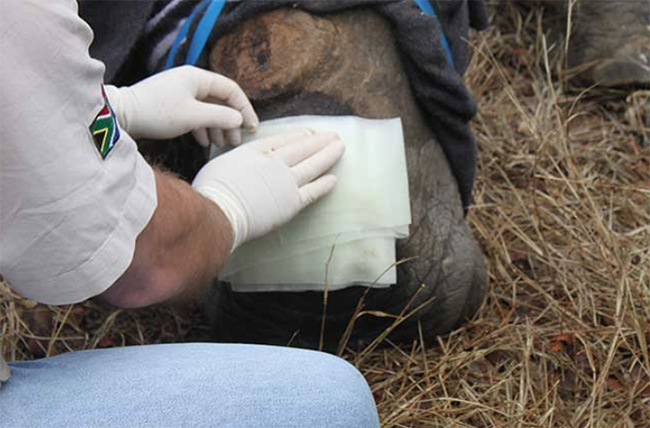 In the first treatment procedure, the wounds were washed out and rinsed to remove debris and dead tissue. They were then flushed with F10 – a disinfectant, antibacterial, and antifungal solution. Thick F10 ointment was also smeared onto the injuries to further reduce the risk of infection. A fibrin-rich, calcium-rich seal was placed on the exposed tissue to hasten the healing process, and to stimulate granulation tissue (the first step in wound repair). One must remember that the delicate tissue lining of the sinuses is not usually exposed to dirt and external air – so the sensitive tissue can easily become irritated, inflamed and infected. The doctors then placed an antibacterial dressing on the wounds, sealed in place with dental acrylic for one of the rhinos, and casting material for the other. 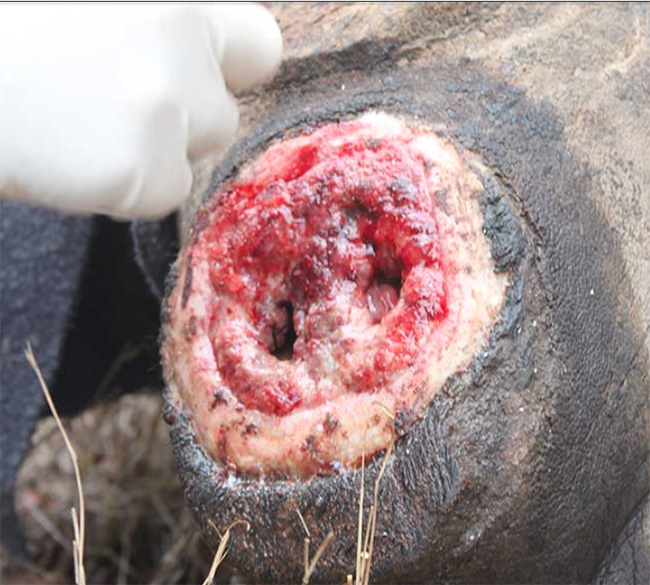 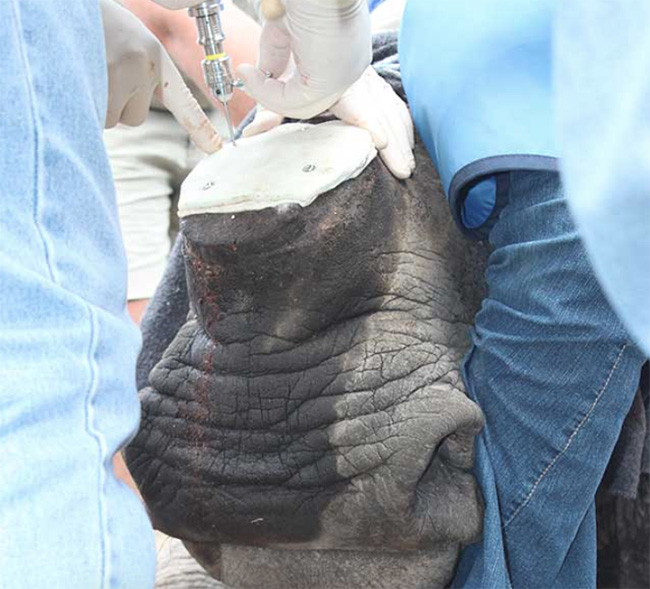 When the wounds were handled for the second time, granulation tissue had already formed to seal off the sinus cavities (no air could be felt coming out of the wound when the animal breathed), and there was absolutely no sign of infection. This time, instead of F10 ointment, a special type of fiber dressing which is biodegradable and super-absorbent was used. A casting material was then placed over the dressing, and drilled into place. 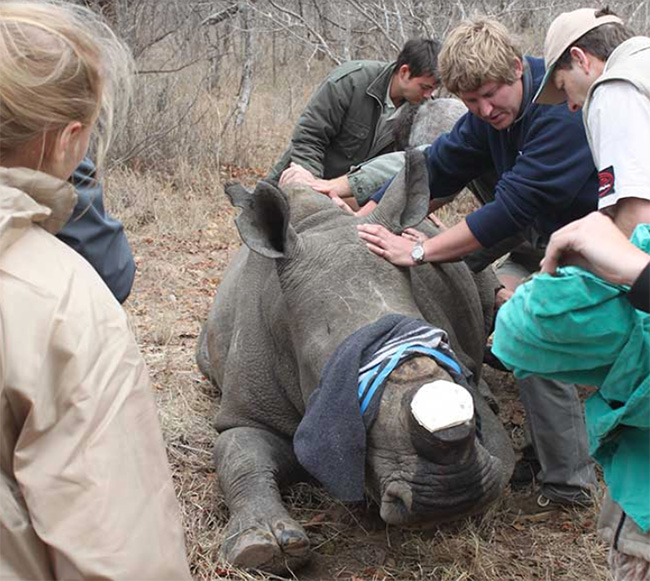 Dr. Marais took X-rays as well as camera images of the rhinos’ sinuses. The camera images show how far into the sinuses the tissue is affected (thankfully not too far), while the X-rays would indicate any damage to the bony structure of the sinuses, as well illustrate screw placement used to secure the dressings. Based on these images, we are confident that we are on the right track as far as the rhinos’ treatment is concerned. We are hoping that we are able to develop a standard protocol for treating rhinos with similar wounds through this process, as we believe that the survival success rate could potentially be much higher. 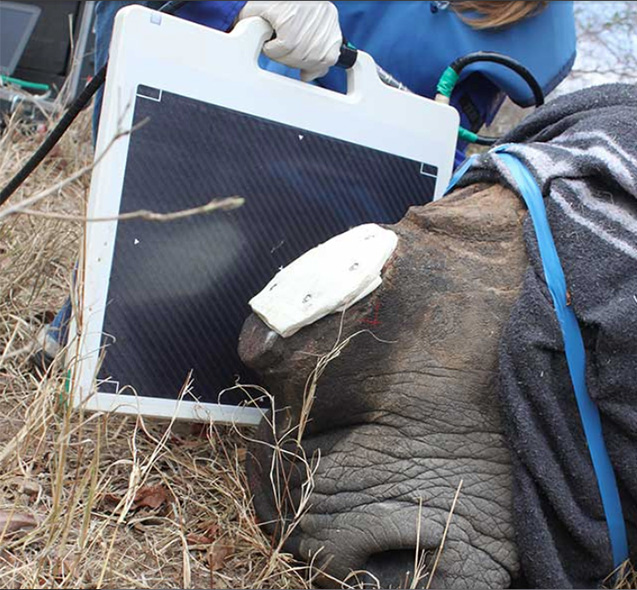 Khula does it again!