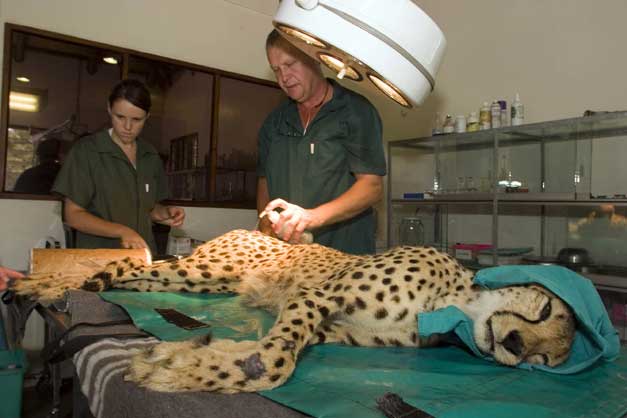 We recently experienced a devastating Anthrax outbreak at the Centre. We lost three cheetahs in the process, one of which was pregnant. The expectant female died just ten days prior to giving birth.

The cubs were all alive at birth, but none of them survived beyond eighteen hours. This was due to the fact that even though they all had strong heartbeats, their lungs were not yet developed enough to sustain them. There were five cubs in total, two of which were King cheetahs.

We vaccinated all the animals resident at the Centre as soon as we realised there had been an outbreak. Unfortunately some of the cheetahs were on antibiotics at the time, and therefore couldn’t be vaccinated immediately as their antibodies would have been compromised.

We suspect that the disease was spread by the vultures having eaten infected meat, and then bathing in the surrounding dams and water sources. Animals drinking from this water were then exposed.

Since vultures cover a really large area, it cannot be ascertained precisely where they ate the meat. It is also very dry all over the lowveld at the moment, which puts the area is at even greater risk as there is noÂ rain to flush out the drinking water .

We subsequently cleared the “vulture restaurant”, and dug a huge hole in which to bury the bones. Although it is unlikely that the contaminated meat came from the HESC, as a precautionary measure we burned all meat in our fridges too.

We rigorously cleaned and sterilised all open areas with chlorine, and brought in fresh drinking water from the borehole.

No meat is currently being allowed in or out of the lowveld area.

The northern region of the Kruger National Park is currently experiencing an anthrax outbreak of its own. Outbreaks of this nature are a natural occurrence in the northern Kruger ecosystem and occur approximately every ten years.

They are usually linked to high buffalo and kudu population densities during dry periods, and the arrival of the first summer rains generally puts an end to these outbreaks.

The State Veterinary Services and SANParks ranger staff will carry out continuous surveillance and monitoring of the outbreak until the matter is resolved.

It is important to note that there is absolutely no disease risk to staff or tourists, unless they handle or consume material from infected carcasses.

Anthrax is an acute disease caused by the bacteria Bacillus anthracis. Most species develop a rapidly fatal septicemia that results in sudden deaths.Â There are effective vaccines against anthrax, and some forms of the disease respond well to antibiotic treatment. Symptoms of the disease vary depending on how it was contracted, but usually occur within 7 days. Click here to learn more.

Please remember to use the Social Media options (on the right) to share blog posts that you enjoyed with your friends and family. You can also “fan” us on Facebook and follow us on Twitter by clicking on these links.

We need to spread the word in order for HESC to continue doing its great work. And the more support they have, the easier it is for them to do it. This is where we need our fans and followers to pass on the message.

US FRIENDS OF HESC PROVIDES ONGOING FINANCIAL SUPPORT TO HESC