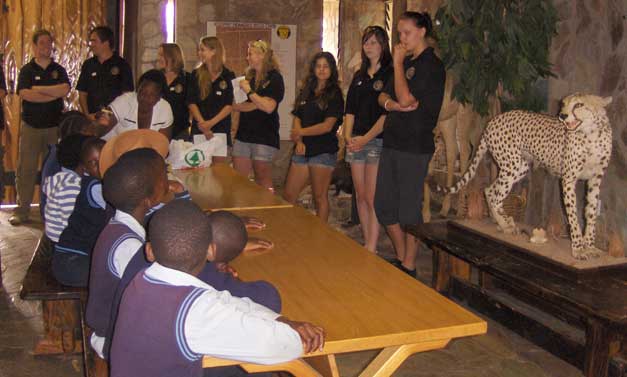 The weekend began with a chilling adventure on quad bikes, with some being better suited to the sport than others. Harry and Elley got lost, but since the bikes weren’t furnished with GPS tracking devices we’ll forgive them. Jane had the coordination of a drunken baboon, which no amount of modern technology could have helped. All in all a fantastic time was had by all, and thankfully no limbs were broken en route!

On Saturday we spent the night in the bush, with pairs of students taking turns to stay awake and ward off the wild animals that were so desperate to maul us to pieces as we slumbered peacefully under the stars. Fortunately we all survived the ordeal and lived to see another day.

On Sunday Tabs taught us how to shoot. Alessandro proved to be a crack shot, taking down a paper kudu at 50 yards with ease.

This was followed by another visit to our favourite little escape artists, the wildcats. Two of them were taken from their enclosures in order to be re-released to the wild.

Monday was our last full day here and we kicked it off with a visit to the school in Acornhoek. After dropping off a bunch of toys at the school, we then brought 12 of the kids back to the centre to teach them about wildlife and play games. It was wonderful to see the excitement on their faces when they saw all the animals for the first time.

As a final treat we were allowed to go in and stroke Khula, one of our favourite cheetahs. It was very sad to bid farewell to all the animals weâ€™re grown so fond of during the past few weeks.

As this is our final update, we would like to say a heartfelt THANK YOU to everyone at HESC. We have all had the most wonderful time here. We leave with heavy hearts, but happy memories!

PS – We just successfully released two of the African Wild cats to the wild! And isn’t that what it’s all about?