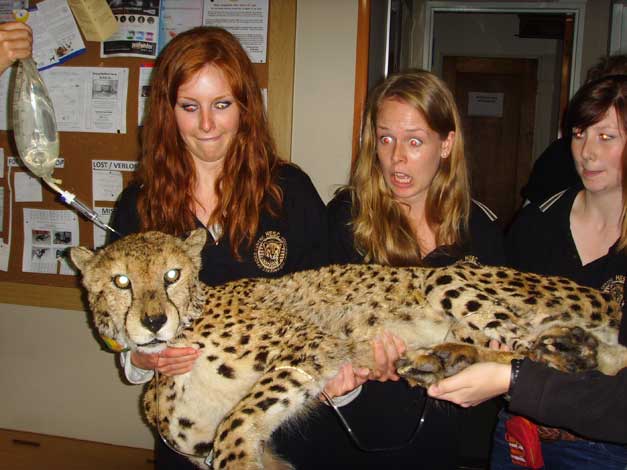 It’s been a busy few days here at the centre!

On top of our daily routine of feeding the animals, we were also given the somewhat daunting task of catching eight African wild cats. Eeeek!

Armed with a net and blanket we were fortunate to escape injury.

On the way to the vet to get the cats sterilised, there were 13 people, a cheetah, and the eight cats, all riding together in the minibus!

The cheetah (Habana) had to get a pin removed from his leg, which he’d broken a while ago.

We watched the vet remove the pin and then had to carry the groggy animal back to its box.

We visited the Moholoholo rehabilitation centre, where we fed the vultures (by hand, no less!) and observed the vet tranquillise a lioness and then inject a contraceptive implant into her. We also saw some leopard cubs and played with a baby rhino and baby hyena.

Hopefully this week there will be new cheetah cubs born at the centre!..watch this space!