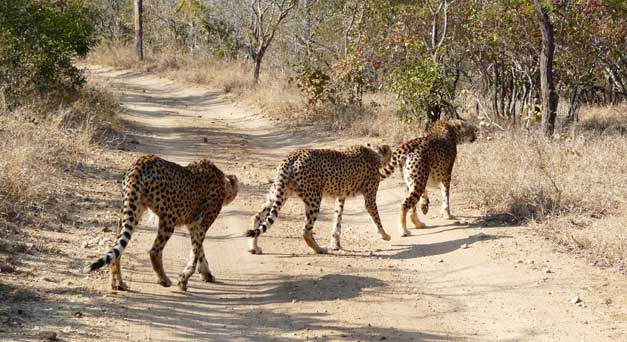 On the 6th of August, Rosalina, a 4-year-old female cheetah from the Eastern Cape was released on Hongoni Private Game Reserve.

Rosalina originally came from HESC, where her two new male companions also stayed for a while.

Rosalina was kept in a boma on Hongani from the end of May this year in order for her to become familiar with her new surroundings, as well as to get to know the two boys a little better. This proved to be a fruitful exercise, as she immediately joined up with them upon release.

On the 3rd of August, Dr Peter Rogers of ProVet Wildlife Services, assisted by Janelle Genis, prepared Rosalina for her release.

“She is one of the biggest female cheetahs I have ever seen,” said Peter as he looked down on the anaesthetised cheetah. Peter and Janelle drew blood samples, fitted the collar and treated Rosalina for interior as well as exterior parasites. They also vaccinated her for rabies.

Analysing Rosalina’s blood was actually one of their main priorities during the operation. Cheetahs are known to be susceptible to kidney failure, but after losing 42 cheetahs within just a few years, HESC decided to delve deeper into this disturbing phenomenon. Hopefully through analysing the blood of cheetahs like Rosalina, the cause might be found and treated.

A great thank you goes to Mary Jane Weiskopf, a board member of the US Friends of HESC. She sponsored the collaring and preparations as well as the release. Mary Jane has long been a fan of Africa, and loves everything about it. Especially its animals.

“This is the 17th year in a row that I’ve visited Africa,” said Mary Jane proudly. Visit our Facebook and Flikr albums to see more photos of Rosalina’s release.