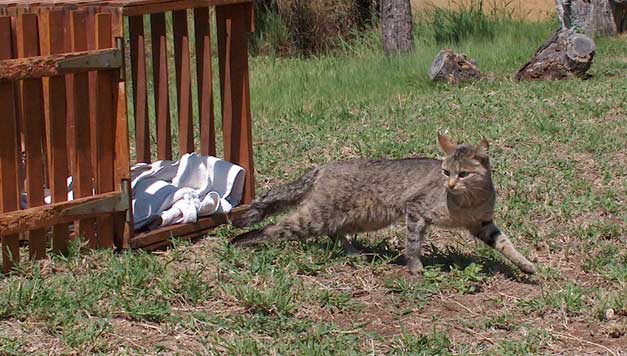 Mad the African Wild Cat makes a run for it!

On Saturday 6th November HESC, in conjunction with the Association of Italian Experts of Africa (AIEA), released four African Wild Cats and two Spotted Eagle Owls back into the wild.

First to say goodbye were Mad and Shelly, two of the four cats. We let them go outside Camp Jabulani’s main lodge. Mad, the eager tomcat, darted out the cage as soon as we opened the door and made a beeline for the pond, diving and swimming with vigour to the island a short distance from the water’s edge. Shelly followed hot on his heels, but opted for the drier alternative of the veld rather than risk getting her fur wet.

Saartjie and Moss – the other two cats – were released at Camp Jabulani’s elephant stables. We’re hoping they will choose to stay in the area and feast on the resident pest population. In contrast to Mad and Shelly, these two were a little more reluctant to leave, and literally had to be tipped out of their box. But as soon as their paws touched the grass they realised they were free and made a run for it.

Back at HESC, Basie Riekert built a special owl box for the two Spotted Eagles Owls, which are the offspring of the pair that came to us from a zoo in Nigel. The year old chicks were raised at HESC, and are therefore used to having humans in close proximity to them. So when their box was opened the two of them merely hopped out, ruffled their feathers, and went to roost in a nearby tree.

AIEA sponsored the release of all the animals, including the collaring of the cats, the tags for the owls and all the veterinary costs involved. The organisation consists of a panel of expert members that are Italian nationals, all of whom have either been living or working in Africa for a long time. Many of them are field guides offering reliable tourism information to Italians planning a trip to Africa. The group of seven – led by Sergio Pitamitz – also spent six nights at HESC’s Nungu Camp, where they participated in the Student Programme.

Visit our Facebook page to see all the photos.