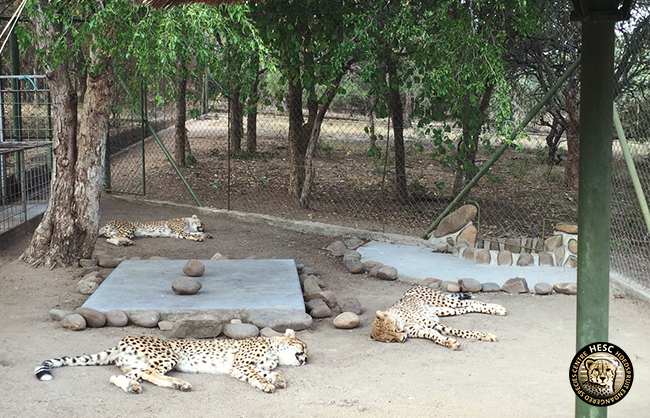 Estimates of cheetah population numbers are never accurate as the animal occurs in low densities in nature and is not easily seen in the wild. The total population worldwide is estimated to be between 7 000 and 12 000. 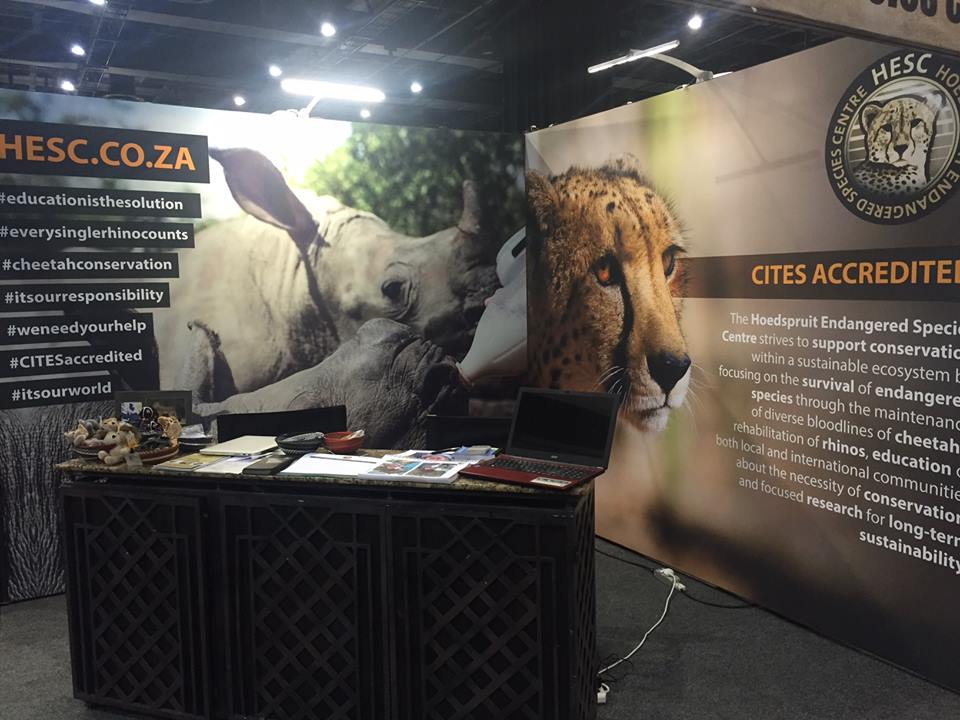 Cheetah populations are genetically very uniform or monomorphic. Wild cheetahs often occur in small isolated or patch populations that lead to further narrowing of the gene pool. Therefore, HESC’s breeding programme aims to ensure the birth of cheetahs with distinctly different genetic lineages. Where possible these animals are used to support gene diversity in wild populations.

It is general international practice to exchange, also sell, genetically diverse bloodlines to sustain pools of genetic material and thus prevent inbreeding in small groups of endangered species, such as cheetahs. Zoos, in particular, participate in this practice that is conducted in accordance with CITES (the Convention on International Trade in Endangered Species of Wild Fauna and Flora) guidelines. At HESC we focus on maintaining diverse cheetah bloodlines to provide diverse genetic material to small conservation areas where inbreeding is an ongoing problem.

A few months ago 12 of our cheetahs took part in DNA profiling conducted by the National Zoological Gardens of South Africa in order to investigate the pathology and potential genetic basis of oxalate nephrosis in cheetahs. 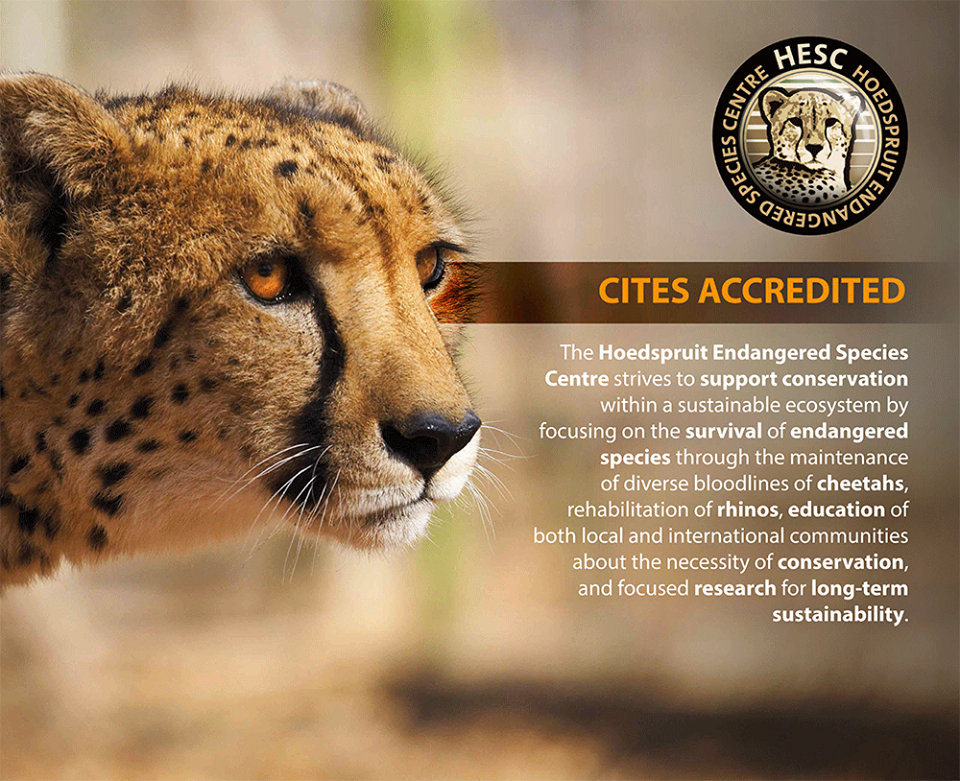 The Hoedspruit Endangered Species Centre was accredited by the Convention of International Trade in Endangered Species of Wild Fauna and Flora (CITES) as a captive breeding institution of the species Acinonyx jubatus (Cheetah) in 2006 making it the second of the only two organizations that have been recognized in this way.

The Chain of Custody sample collection procedure for each and every Cheetah (Acinonyx jubatus) is as follows:

All sampling materials included in the kit must be laid out supplied ensuring nothing is overlapping, and that all 4 corners of the forensic bag are clearly visible. 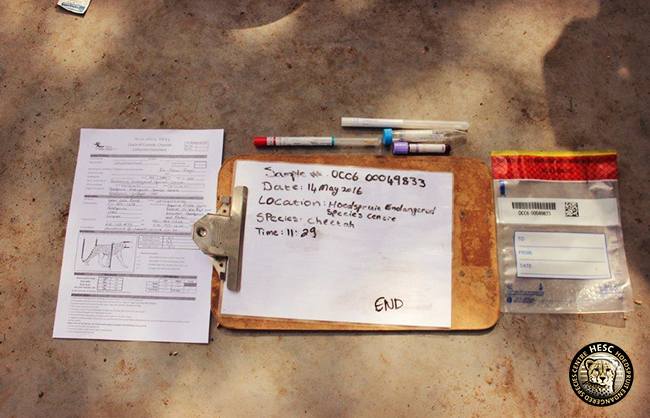 Fill in all the necessary details on the white-board – animal ID, date, location, species and include the word ”start” on the first photograph, as well as the time.

Take a photograph of the cheetah from the one side, ensuring the whole cheetah is captured in the frame. 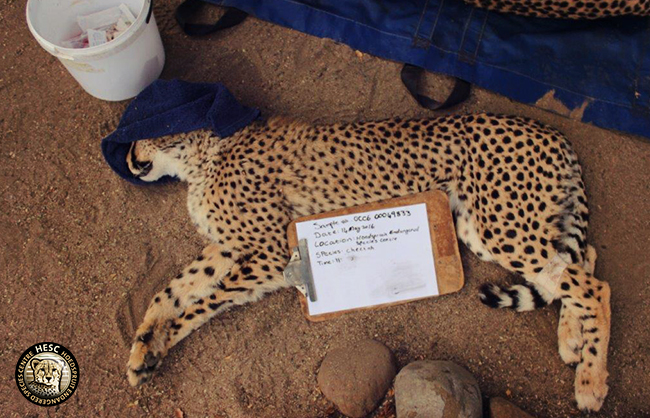 Take a profile photograph of the cheetahs face from the same side. 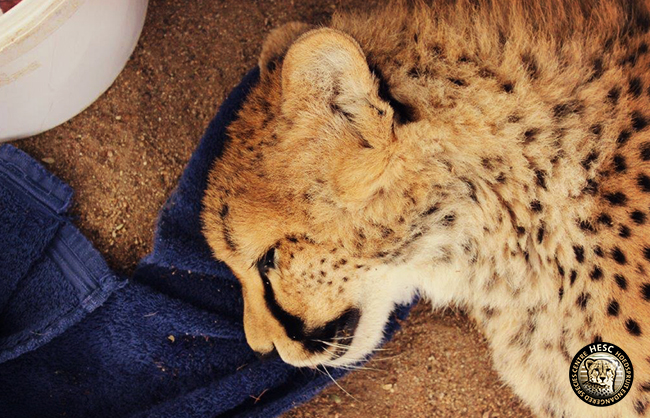 A Photograph of the tail from the one side. 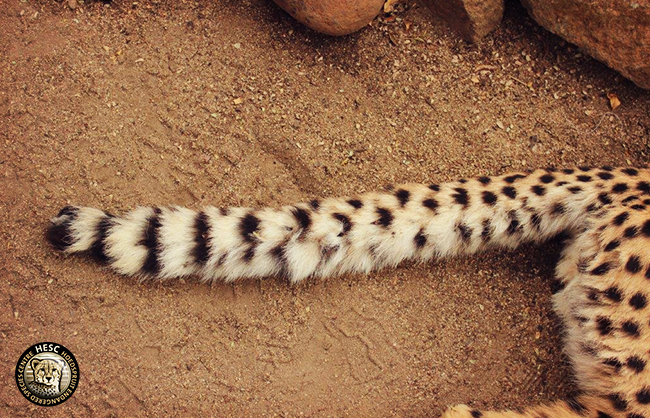 A photograph of the opposite side to ”photo 2”. 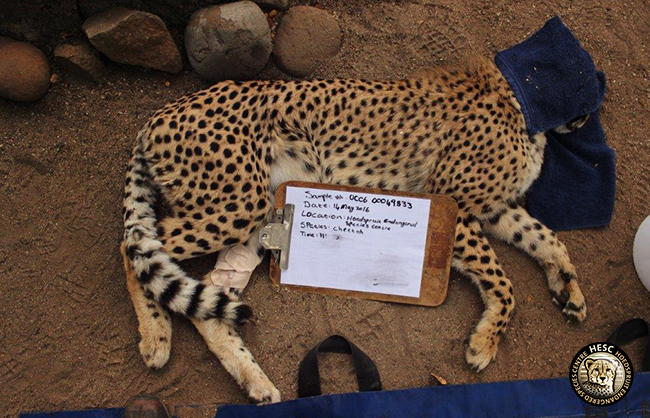 A photograph of the opposite side to ”photo 3”. 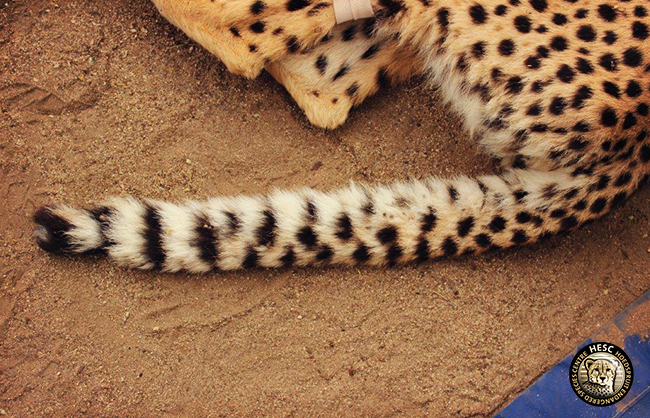 A photograph of the opposite side to ”photo 4”.

A frontal view of the cheetahs face. If any, take a picture of distinguishing characteristics or scars on the individual cheetah.

Hair from the tip of the tail can be collected, ensuring to pull out the follicle

A photograph of collecting the hair. 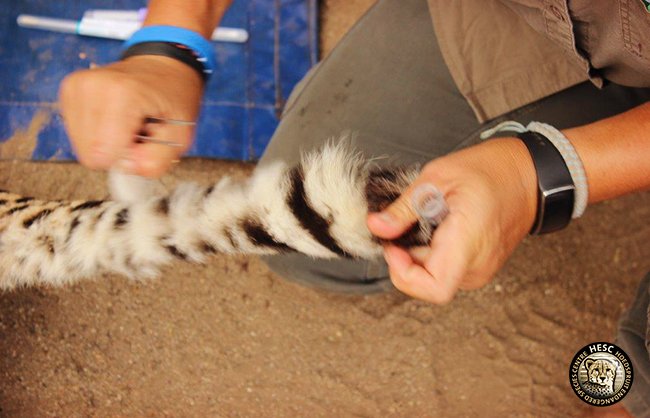 When placing the hair into the envelope provided, take a photograph showing the animal ID or field ID clearly.

Complete placing the hair into the envelope and seal

The Veterinarian or para-veterinarian can then proceed to collect the cheetahs blood in the EDTA (purple topped tube) provided.

The blood being collected 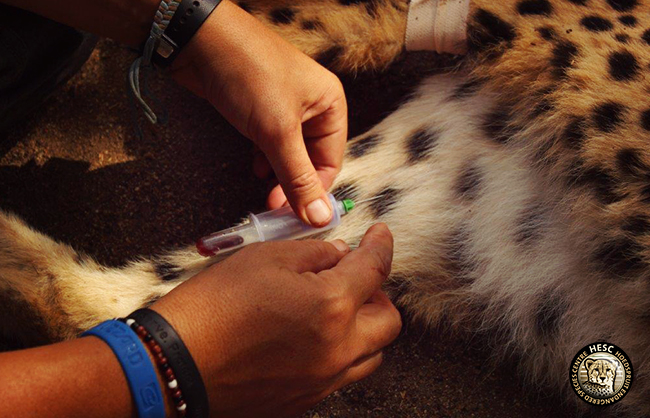 Place a small drop of blood from the end of the needle onto the FTA paper provided and air dry. DO NOT BLOW on the paper as this will contaminate it

Take a photograph of the blood on the FTA paper.

Place the air-dried FTA paper back into its marked tube. 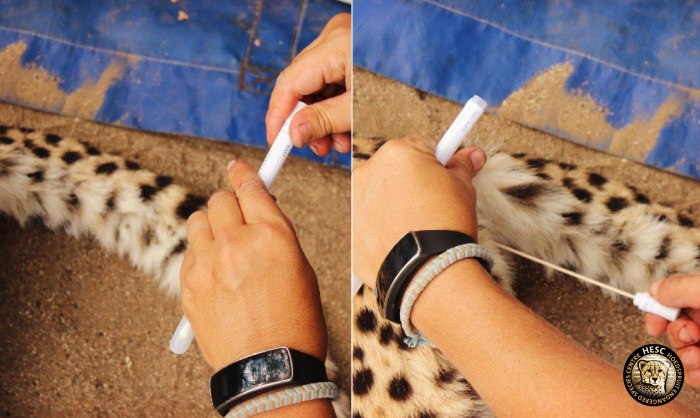 Place all the collected samples alongside the white-board, completed datasheet, and unused forensic bag 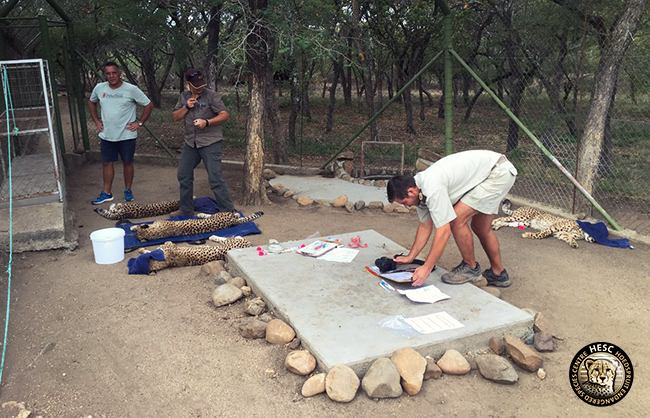 Conclude by placing all the samples and datasheet into the forensic bag, peel the plastic on the inside of the bag and seal. Write ”end” on the bottom of the white-board, as well as the time, and place the sealed forensic bag alongside it.

Update on the Rescued Rhinos @ HESC