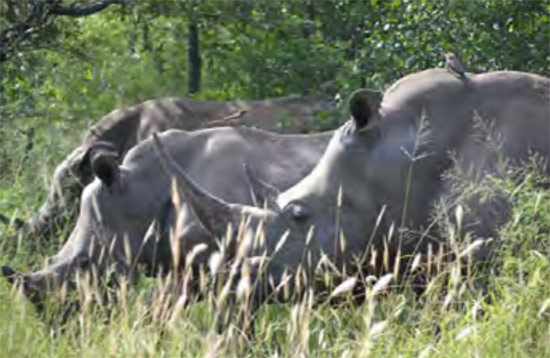 On Friday the 30th of August, a ranger radioed the head of the anti poaching unit on an un-named reserve to ask if the rhinos had been de-horned as he had spotted a rhino without a horn.The anti-poaching unit stepped in, and found that 3 rhinos had been darted by poachers and de-horned. Miraculously, although 1 bull was killed, the remaining 2 cows survived.

The horns had been neatly cut of with a chain-saw, but this left the animals’ sinus canals open and exposed, posing a massive threat.

On Tuesday the 4th September, the 2 rhinos were moved to HESC so that we could keep a close eye on them, assist with the treatment procedures, and reduce costs in helicopter fees which would have been required to conduct aerial searches for them.

Dr. Peter Rogers treated and then closed the cavities with a fiberglass cast, which covered the entire nasal area.

Although this cast did the job and lasted a few days, its presence was a source of irritation to the rhinos and was eventually rubbed off. We then asked Dr. Gerhard Steenkamp, well-known veterinarian dentist and senior lecturer at the University of Pretoria, and Dr. Johan Marais (equine and wildlife surgeon and lecturer at the University of Pretoria) to share with us their ideas, knowledge and experience. We all arrived in Hoedspruit early in the morning on the 10th of September 2013.Although we had moved the 2 surviving rhinos into a 25ha camp, we battled for 5 hours to find them, and were unable to dart them. A helicopter was then called in, and the aerial view helped us to quickly find and sedate the animals (it amazed us that we could not find the animals in an enclosed area, yet poachers seem to have no problem).

The bigger cow was darted first and was under sedation for an hour and a half. During this time her blood pressure and temperature were checked, while the veterinarians cleaned her wound and prepared her sinus canals for the acrylic fixture to close the open cavities. After the cleaning process, Dr. Marais used the sonar machine to locate and remove dead tissue/ infection, and the canals were spooled. Pens were then drilled into the bone next to the canals as a supportive base for the layer of acrylic.

TISSEEL is a fibrin sealant indicated as an adjunct to standard surgical techniques (such as suture and ligature).

Only the rhinos’ canals were covered this time, thereby reducing the area of coverage and subsequent irritation to the animals. The first rhino cow was woken with an antidote. Despite being a bit disorientated, she soon ran off.

The helicopter was then airborne again, and the second cow (named Dingle Dells) was darted and the procedure repeated.

From blood results, we have discovered that the older rhino cow is in fact pregnant. What an amazing story of hope should she manage to pull through, and give birth to a healthy baby after the trauma she has endured.

Christo Schreiber, curator at HESC reported that the 2 cows are doing well. They are eating and drinking, and are tracked via camera to monitor their safety and wellbeing. We are committed to seeing these rhinos recover to a state of full health.

The next procedure is scheduled for the first week in October.

We will communicate updates with you as time goes by.Should you wish to get involved by donating funds towards the care of the rhinos, please click here to our online donation portal.

Click here to view images of the procedure performed on the de-horned rhinos shortly after being found.

WARNING: NOT FOR SENSITIVE VIEWERS.