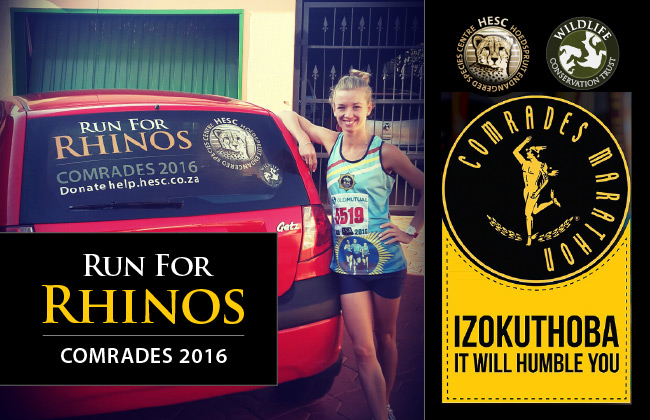 Dezi du Plessis, an accounts administrator at our head office in Pretoria, has taken it upon herself to ‘Run for Rhinos’ in the upcoming Comrades Marathon set to take place on 29 May 2016. Money collected through sponsoring Dezi for every kilometre that she completes will be donated to the Wildlife Conservation Trust (WCT) of the Hoedspruit Endangered Species Centre (HESC).

Dezi is an avid runner who has been competing in road running since her days in primary school. In high school she received colours for Northern Transvaal, but it has only been over the course of the past two years that she has started training for ‘The Big One’ – The Comrades Marathon.

As a member of the Pretoria Police Marathon Club, she exercises for an hour a day at least four times a week with her father, Dave Baker, as her trainer.

Dezi recently ran her personal best of 4 hours 14 minutes in the Uniwisp Marathon at Sabie in Mpumalanga. This past weekend she competed in the popular ‘Om-die-Dam’ (Around the Dam) race at Hartbeespoort Dam.

Dezi’s Run for Rhino project is but one of HESC’s many fund raising campaigns. Linking it to this iconic race, as one of the biggest and most popular in the world, is ideal for raising awareness for the plight of the rhinos.

Although her primary sponsor is HESC, any person or company who wishes to sponsor her and in-so-doing contribute to the care of orphans and survivors of poaching attacks, is welcome to pledge their support.

Donations will be used for the care of the rhinos already in the custody of HESC, but also for those victims still to arrive. The cost of care includes milk formula/ feed for orphaned calves, and medical care for those injured in the ongoing brutal poaching attacks.

Please contact Retha (admin@cheetahcentre.co.za) should you wish to sponsor Dezi.

Our young rhinos, Stompie, Nhlanhla and Lula are de-horned

What does it take to keep a rhino?