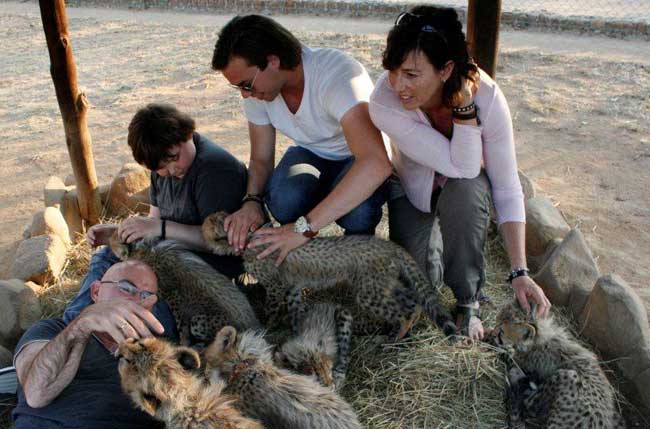 Daniel and his family visiting with the cheetah cubs

Earlier this month Daniel van Wyk came all the way from Holland to visit HESC. Daniel is a cancer sufferer whose lifelong dream it’s been to visit Africa and interact with lions and cheetah, although his love of wildlife is not limited to these cats.

When Daniel arrived in South Africa he experienced mobility problems, where he tired very easily and also suffered from severe back pains. Things took a turn for the better after he visited HESC and the Kruger National Park however, as he was soon walking and full of the joys of life. By the time he returned home this brave little boy was actually running, something he hasn’t been able to do in the past two years. It gets even better though, because we’ve since heard that Daniel’s leukaemia is now in remission. Apparently he’s due to have another checkup in six weeks time, which will hopefully confirm this wonderful news. And if he hasn’t already done so, Daniel will also be returning to school shortly.

Interacting with the cheetah cubs was everything that Daniel had hoped for and more, and he was understandably reluctant to leave. We’re just so happy to have been able to play a part in making his dream come true, as it was clearly very special for him.

We received some wonderful feedback from African Insight, a South African operation that specialises in arranging tours for physically challenged persons. In this instance they collaborated with Doe-een-Wens (Make a Wish) in Holland to help make Daniel’s dream a reality.

“These trips are very special, and the empathy and encouragement you and your staff offer has proven to have lasting and beneficial results for these cancer patients. The stimulation and positive input has seen them return to Holland to live an almost normal life, this after enduring months or sometimes years of painful treatment. Once again, on behalf of African Insight and myself, I would like to express our appreciation for all that you do for these kids.” Colin Christie.