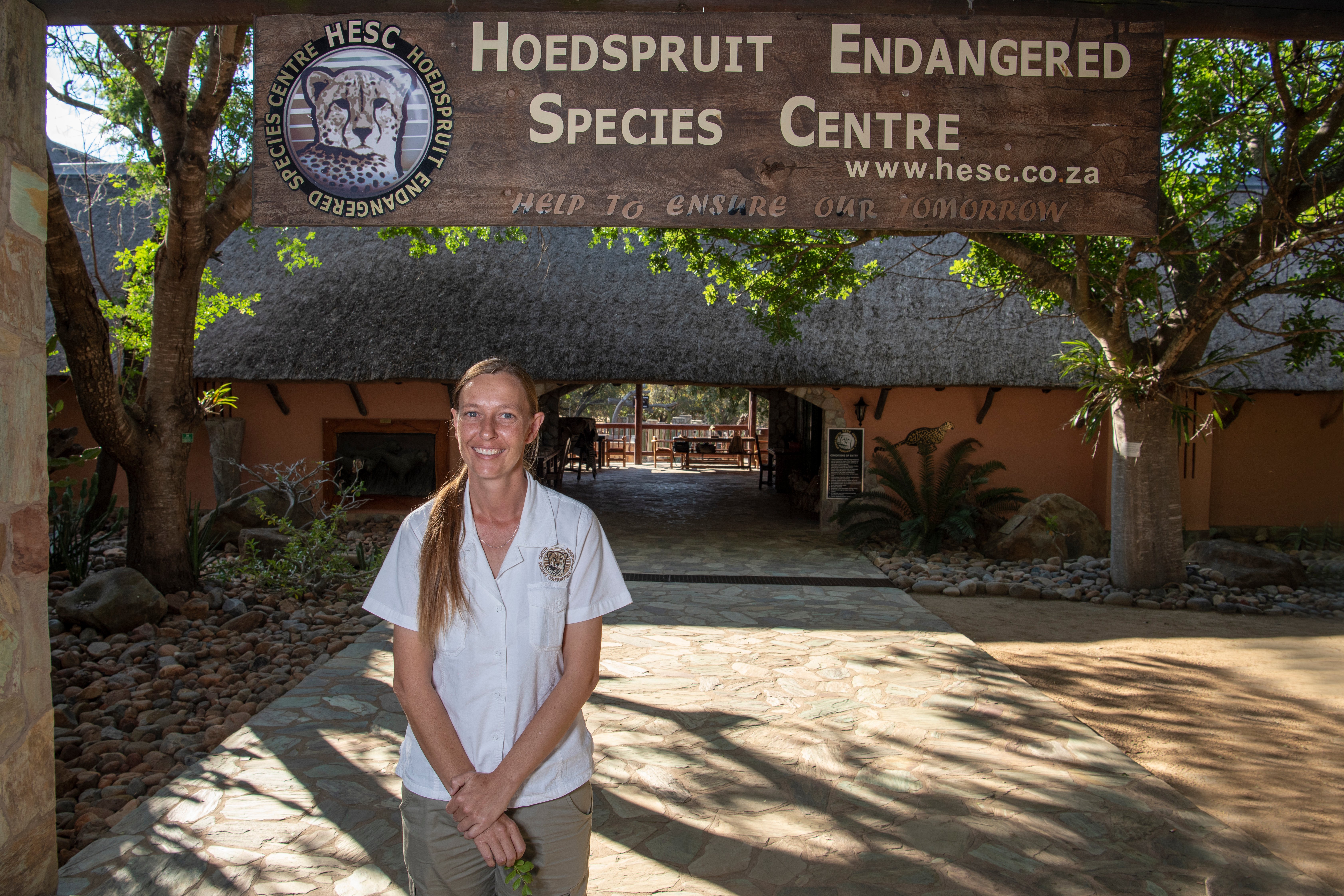 Today we say goodbye and thank you to Karen Swiegers our General Manager since 2016 and Jeanre Brooks (better known as Tabs), Operational Manager since 2017. After a combined 22 years with us, they are leaving to follow their entrepreneurial dream of sustainable farming.
Their contribution over the years was huge.
Lente Roode says: “Your dedication and loyalty, passion for the welfare of our animals and genuine concern for your colleagues will be remembered by all of us. For me it was always a pleasure and an honour to work with you and for that I thank you. I will miss you, but wish you well on your new journey.”
Curator Linri Jansen van Rensburg adds: “Karen and Tabs are the most supportive and caring people I have ever worked with. What a privilege the past four years have been. I will miss them dearly.”
Karen’s journey at HESC
Karen recalls the day she went for her interview with Lente Roode in Pretoria in 2008. “There was this large poster of Jabulani and I remembered how years ago I never missed an episode of the 50/50 SABC TV programme on HESC and the journey with the little elephant that had been found stuck in a silt dam and rescued. I knew immediately that I desperately wanted to be part of this team, in whatever capacity they could accommodate me, and I agreed to forget about wanting to become a field guide to take on administrative duties.”
It was the beginning of a chapter that occupied the next 11 years of her life and took her from Administrative Assistant to Student Coordinator to Operations Manager and to General Manager. Her training in Marketing and Public Relations, Game Ranging, Game Ranch Management and a FGASA Level One qualification was relevant to all the positions.
Karen regards the friendships she made at HESC as highlights of her career with us, along with the five years she spent as Student Coordinator. The latter she says were the best years of her life. During this period she particularly valued being involved in the day to day care of the animals, but also the teaching, playing chaperone, field guiding, counselling and catering that formed part of her responsibilities. And when volunteers on leaving often confessed that this programme had changed their lives, her heart would burst with gratitude and pride.
Karen says the most moving experience of her career was working in the team that assisted Dr Peter Rogers with the rehabilitation of the Lion’s Den and Dingle Dell. The two rhinos had survived a brutal poaching incident that left them both without horns and with their nasal cavities exposed.
“I was there for many of the treatment sessions and won’t easily forget the rhinos’ visible distress when screws were drilled into bone to fix casts over the wounds – this despite the animals being anaesthetised.”
Her despair at man’s cruelty towards animals led her to formulate a solution that she is not shy to share: “Drop the fences for animals worldwide, but restrict and fence in humans!”
Karen admits to being excited about the future plans, but sad about leaving what has become a second home to her over the years.

Jeanre’s story
Jeanre started her career in tourism after a BA in Integrated Marketing and a two-year stint of working and travelling in Scotland, England and Wales. Back in South Africa, a field guide course followed.
She joined us in 2008 as a field guide and then became the Assistant Curator, Student Coordinator, Guest Relations Manager and in 2017 Assistant and Operations Manager. We’ll always remember her for her passion for conservation and animals. She believed she needed to be a voice for those that cannot speak for themselves and was a proud ambassador of the Centre at all times.
One of the major highlights during her years at HESC was the release of orphaned rhinos Gertjie and Matimba. She says she’ll never forget this.
Like Karen, she found it difficult to come to terms with the cruelty inflicted on animals by poachers and she still remembers the shock of seeing Dingel Dell and Lion’s Den when they first arrived in 2013.
Jeanre loved walking the baby rhinos Gertjie, Matimba and Esme and giving them mud baths. She admits: “I will always miss the bushveld and its birds, the animal ‘traffic’ one encounters driving to work and the roaring of Scar and Mufasa at night.”
She says HESC’s involvement in the local community and the education programmes conducted at the Lumukiso Preparatory School made her acutely aware of the problems experienced in communities as a result of unemployment.
“Karen and I believe our new venture will contribute significantly to job creation in our district and to alleviating a measure of poverty and hunger for those that join us. Working in a conservation environment for so many years has provided perfect training for sustainable farming that aims to have minimal effects on the environment.”
Karen and Tabs thank ‘Mevrou’, Adine and all their colleagues for the awesome experience of the past eleven years. “We will always treasure the lessons learnt here and our wonderful memories,” says Tabs.
All of us at HESC wish Karen and Tabs the very best for the future. We will miss you!
John Cooper has taken over as the new HESC General Manager and his wife Annalie Cooper, as the Operations Manager. More about them later.

An update of the latest happenings at HESC