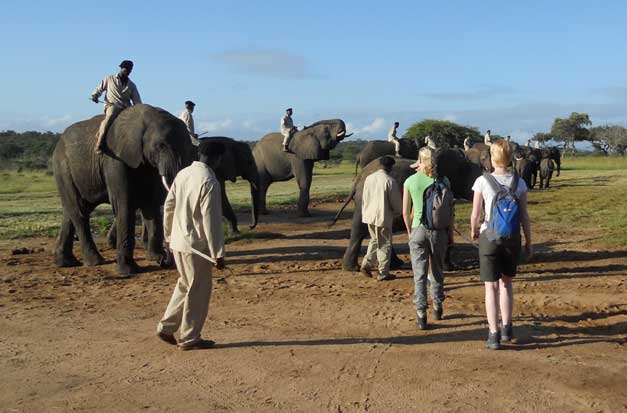 Hi there, well this week has been amazing! I feel like I’ve been here for ages.

On Wednesday we heard that there was a lion about, so we went on a drive to see if we could find her. Unfortunately we had no luck, but we did see tracks on the side of the road so she was definitely in the area.

We went to visit the Centre to watch a video about the cheetahs and how the place came about. After that we we were taken on a tour, where we met the cheetahs and other animals and birds. It was a lot of fun and I felt like I was on a safari. We then headed into town to get some food for the week. Later that evening the staff from the Centre came to our camp for a barbecue, so that we could get to know everyone. It was a good way to end to a great day.

On Thursday we were up at 6am to prepare the food for the cheetahs and small animals. We had to cut small slits in the meat and fill the pockets with supplements, and then it was off to feed the cheetahs. The small cats are easier to feed, as they get mainly cat food with only a little fresh meat. After a long day we ate supper and went to bed very tired.

Friday we prepared the food and fed the cheetahs again. The left-overs went to a pack of hunting dogs. We were told about an early morning surprise, so we went to bed early so we could be up at 5.

We went toÂ Camp Jabulani and met the elephants. It was amazing! We went river rafting in the afternoon which was also great â€“ Â especially as I only fell out once.

Later that night we all piled into the truck and drove into the veld, where we saw four lions – a mother and her cubs. We found them after all!

Till next time, Amanda 😉

WOW “I’ve seen, felt and done so many things in the last week, I hardly know where to start! When I arrived at Hoedspruit airport the first thing I saw was a cheetah watching the plane. “This must have been a good sign,” I thought to myself.

And it was, because after that I got to see lions, cheetahs and elephants!

Every morning we wake up early, because there’s so much to do. We start the day in the butchery, cutting off fat and skin from huge pieces of meat, and preparing the food for the small animals. Then we hop on a safari truck and give each cheetah their 2kg piece of meat. Of all the predators we encounter at the Centre, the hornbills are actually the most aggressive and seem to have taken a strong dislike to our shoes as they peck at them constantly.

In between all our daily duties, we’ve also done a beautiful boat trip down the Blyde River Canyon, been rafting in the Sabi River (of course we Â fell out the boat), and we watched the amputation of an owl’s leg. We were so close in fact, that we could hear the bone crack when it was clipped.

While I am writing this I can hear the lions roar. I feel like I am truly in Africa! Visit our Facebook and Flikr albums to see more photos of our visit so far.

Until next time, Maaike 😉

THE HESC LAUNCHES RESCUED RHINOS @ HESC, AND ANNOUNCES THE 'EYES ON RHINOS' CAMPAIGN