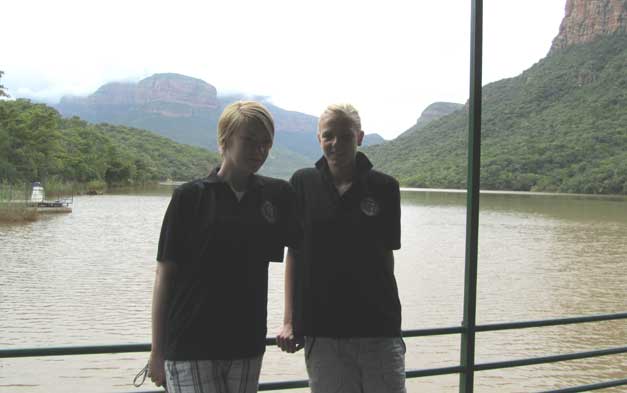 Amanda and Maaike in the Blyde River Canyon

Since the last update we’ve done so many things that I had to look through my notes to make sure I remembered everything.

This week we got to experience a lot of animals up close. On Tuesday we visited the Moholoholo Rehabilitation Centre, where – apart from learning a lot – I also got to pet an eagle, hold a vulture on my arm, cuddle a young cheetah, and touch a baby black rhino.

On Wednesday we encountered a black mamba, a baby chameleon and a dead black button spider! And all just on the road to and from the cheetah enclosures. We ended the day with a braai (that’s the South African version of a barbecue) with the staff from the Centre. The boerewors rolls (which are basically hotdogs on steroids) were a real treat.

Thursday was a really exciting day! After feeding the cheetahs we went to visit Khamai Reptile Centre. There we learnt a lot of valuable information on snakes and their venom. Symptoms, depending on ‘who’ bites you, include bleeding, horrible pains, or coma (to mention a few).

Fortunately they also explained how to avoid getting bitten, and what to do in the unlikely event that you do. We saw some black mambas eating mice, and I had my picture taken while holding a python. To end off an already exciting visit, we were taught the correct way to pick up a Puff Adder (hint: not with your bare hands), and we had the pleasure (?) of letting a giant spider crawl on our hands.

And just in case we felt all that wasn’t thrilling enough, tomorrow we’re going abseiling!

We had a good few days this week. We helped transport a cheetah from one enclosure to another, and boy was he heavy!

On Tuesday we visited the Moholoholo Rehabilitation Centre, where we got to cuddle a cheetah, glove feed vultures and pet a baby black rhino.

We were interviewed by a Chinese journalist who was writing an article about the Centre. We took him on a tour of the Centre, and fed the vultures and wild dogs so that he could take photos for his article.

We visited the baby cheetah enclosure, which was absolutely fantastic!

In the evening we had a barbecue – or braai, as they call it here in South Africa – with HESC’s staff, which was great fun.

On Thursday we went to visit Khamai Reptile Centre. The place is teaming with snakes, although not wandering loose thankfully! We even saw three black mambas being fed.

After the tour we sat outside on the grass, and our guide produced four boxes. In the first was a Puff Adder, which we were allowed to pick up with special hook with a long handle. The second was a Boomslang, which just happensÂ  to be Africa’s deadliest snake! He held it very close to us, and needless to say we were terrified. In the third box was a Cobra, which our guide managed to coax into opening its hood. We all got awesome photographs! We were also given the opportunity to hold a baboon spider and a scorpion. I wasn’t particularly keen until they told us that they weren’t venomous, then I felt a little better.

Visit our Facebook and Flikr albums to see more photos of our visit so far.

A visit to the Hlokomela Clinic – Integrating cervical cancer screening into an existing HIV prevention and treatment programme in Limpopo, South Africa