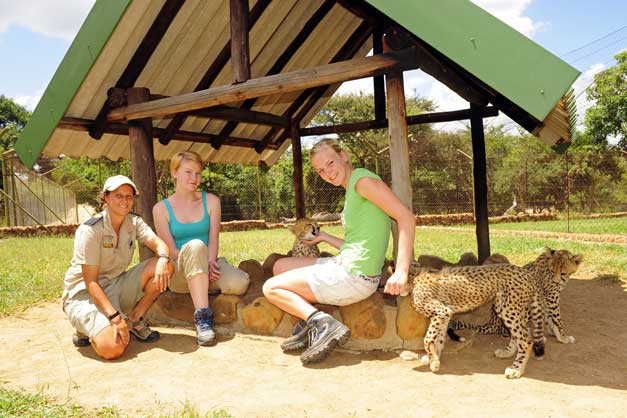 Amanda and Maaike visiting the cheetahs

Walking around the supermarket while covered from head to toe in dirt and dust wasn’t so great, but the quad biking beforehand sure was! Going flat out along mango fields, up hills, over rocks and broken branches was so much fun.

One night we went to Mrs Roode’s house to watch the baby Blue Cranes go for a swim in the pool. They are so cute! What an awesome surprise. While we were there Christo and Karen took a blood sample from one of them in order to check its gender.

On Tuesday we were taken on a survival day, where we learnt how to make a fire bow, tie different knots, and collect water. We saw lots of spiders while out walking, and afterwards we went on a giraffe hunt.

A group of children from the Paulos Ngobeni school came to visit the Centre, and we taught them how and why a cheetah runs so fast. Next we all drew our own cheetahs which was…well…interesting. 😉

We took them on a walking tour to see the King cheetahs. As a surprise they were allowed to visit Eddie the caracal, which was just as exciting for us as it was for them as we hadn’t met him either.

It turned out to be a week filled with surprises, because on Sunday we went to the Kruger National Park to take on the Big 5 challenge. We managed to find lions, elephants, rhinos, and buffalo, but unfortunately the leopards were all hiding. We stopped along the way for a barbecue, and the spot we choseÂ  had a fantastic view.

Spottie the owl was finally well enough to return to his enclosure. We took him back and got some pictures and a video of the big event. His leg is fully healed and looking good, and he is very alert and happy to be back with his lady friend.

Aaah…yet another week packed with excitement, wildlife and smelly meat!

On Saturday we went quad biking through the mango fields. I felt really cool, even though I was afraid of crashing into trees at every bend.

The next day we got up very early to visit the Kruger National Park. Ten minutes after entering the gates we saw a big rhino and two lions. Wow! We enjoyed a delicious brunch at a picnic site in the middle of the park, and by the time we left at the end of the day we’d seen all of the Big 5 except for the elusive leopard. We did get to see giraffes, crocs, zebras, hippos, eagles and elephants though, so all was not lost.

On Monday we shared what we’d learnt so far with the children from the Paulos Ngobeni school. It was so much fun. They didn’t understand much English though, but luckily their teachers translated for us.

Tuesday was survival day. We were taken into the bush and taught the essentials of survival, like how to make a fire and tie useful knots. Most important (we were told) is to always take a walking stick with you, as they’re especially good for keeping dangerous spiders out of your face. And indeed, it certainly came in handy during our walk through the bush.

The rest of the week involved a lot of very smelly vulture meat.

Last night something really cool happened. I was roused from my dreams by a lot of noise, so I got up to investigate. There I stood in the moonlight in my pyjamas, face to face with a family of elephants.

Yesterday we had rifle training, which might come in handy since there’s a Mozambique spitting cobra in our camp again. This morning we brought Spottie the owl back to his enclosure. He’s feeling all better! Now I’m off to make the most of my last few days in South Africa. Visit our Facebook and Flikr albums to see more photos of our visit so far. Click here to see photos from the Paulos Ngobeni school visit.