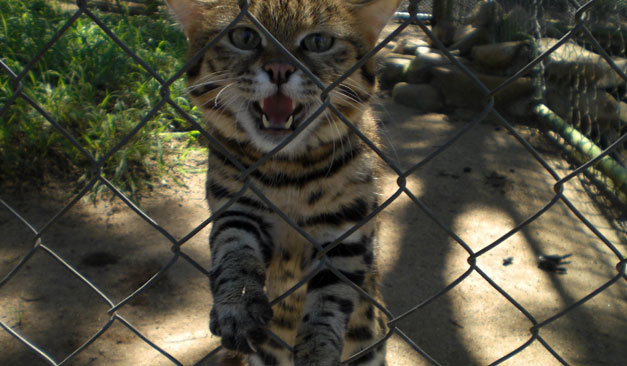 The sun pours in through my office window, elevating my already cheerful mood. My mind is buzzing as we head to the Animal Kitchen to prepare the day’s meals. I’m literally bursting with energy (even though I’ve only had one cup of coffee so far) and I need to find an outlet for it. I decide that today I want to do something different, but I’m not sure what.

I head off to the black-footed cats’ enclosure to feed them.

The black-footed cat is Africa’s smallest wild cat species. A fully grown male weighs between 1.9 kg to 2.5 kg and a female between 1kg and 1.5 kg.

The feisty little felines greet me with their usual hissing, and as I put their bowls down it occurs to me that it’s time to stimulate their natural instincts.

Because of its size, the black-footed cat generally preys on small birds and rodents. However, if these are not available it has been known to hunt the Cape hare and white-quilled bustard, even though they are both much bigger than it.

I took one of the small birds out of the bowl and tied it to a branch of one of the trees in their enclosure.

At first the cats weren’t quite sure what to make of my strange behaviour, and just watched quizzically from a safe distance.

Only once I left the enclosure did they decide to investigate. Lifting their heads and sniffing, they proceeded cautiously in the direction of the tree where I’d hung the bird.

They paused to listen, and then sniffed some more. And then they found it, artfully concealed beneath some leaves.

I watched closely with a mixture of anticipation and curiosity.

They pounced, leaving me filled with a childlike sense of wonder at witnessing these small predators in action.

Rationale for breeding the black-footed cats

Breeding these cats in captivity isn’t easy. The mortality rate is high, especially among the babies, as the adults are sometimes inclined to kill and eat their offspring.

They are naturally aggressive and highly strung, which could be contributing to this behaviour. Kidney failure has also been recorded in a number of captive populations. The successful breeding of this species requires active management and ethological observations in order to identify and manage stressful behaviour, particularly during breeding season.

To date HESC has been successful in introducing different genetic lineages into the breeding programme. However, moving forward the Centre will need to augment the current stock with unrelated bloodlines from other breeding institutions. This is largely due to the limited stock that is available, as well as the ageing of the current breeding stock.

HESC works closely with the International Studbook keeper of black-footed cats at the Wuppertal Zoo in Germany in order to ensure the ongoing success of its breeding programme. Detailed records of the breeding programme are kept so that future breeding centres can benefit from the information gained. Ultimately the aim is to decentralise breeding in captive environments and provide captive-bred animals to zoos, thereby limiting the collection of wild black-footed cats in the wild.