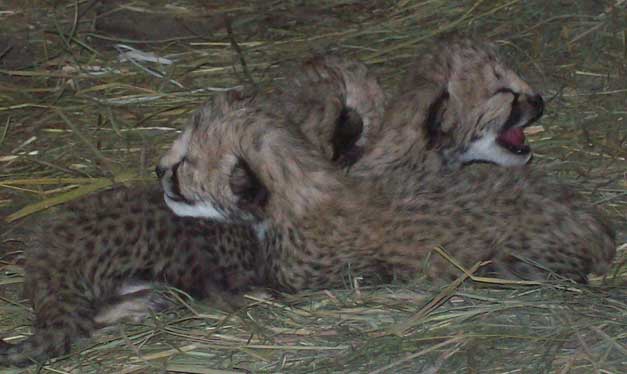 With all the Marabou storks that have been hanging around lately, we took it as a definite sign that babies were on the way.

After all, everyone knows that the stork brings babies. Right?

But the Marabou stork is not the prettiest of birds, so one could be forgiven for thinking that it might only deliver ugly babies.

Well I’m pleased (and more than a little relieved) to say that this was definitely not the case at the Centre, when four exceptionally beautiful cheetah cubs arrived earlier this month.

About three and a half months ago we bred with three of our female cheetahs. But because cheetahs only show that they are pregnant about five days before giving birth, we had absolutely no way of knowing whether or not we had any expectant Moms on our hands.

For almost the entire three months of her pregnancy the female cheetah will remain as thin as a rake, making her the envy of many a woman!

Eventually our patience paid off, and on a fresh September morning Toffee gave birth to three tiny cubs, and by tiny I mean about 15-300g! Then Tilla surprised us by adding a little cub of her own.Â Now we are waiting with baited breath to see if Tanya also has a surprise in store for us.

The Marabou stork may well remain challenged in the looks department, but since they ‘brought’ our adorable cheetah cubs I think it’s time to look past their strange hairstyles and surprised expressions and appreciate them instead.