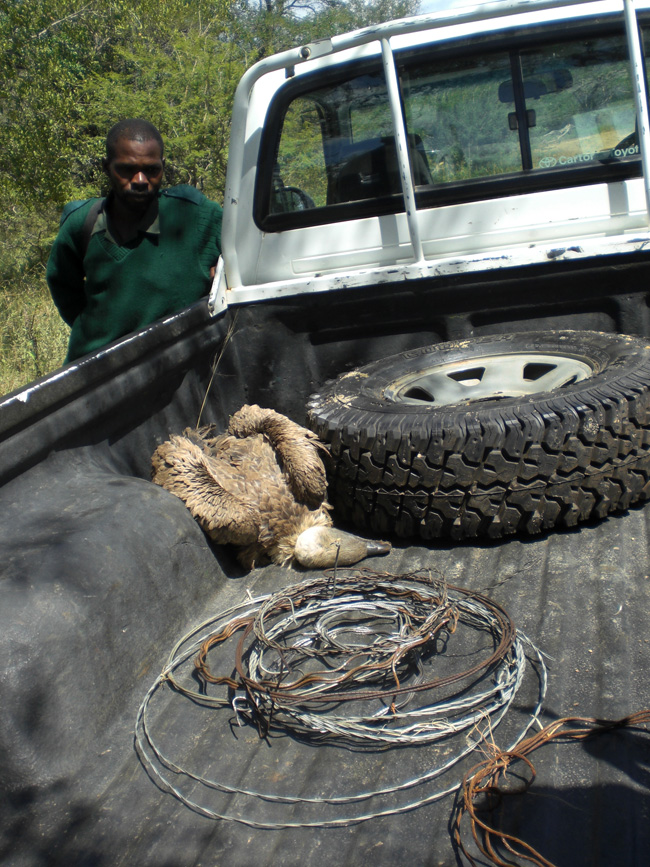 Poaching is the illegal taking of wild plants or animals, in contravention of local and international wildlife management laws, as well as against conservation. It is therefore the violation of the laws and regulations, and is normally a punishable offence.

After two hand-reared rhinos were poached at the Hoedspruit Endangered Species Centre, HESC assisted to form the Endangered Species Protection Unit (ESPU) of the South African Police Service in 1989, with the vision to ensure that South Africa’s natural heritage is preserved through professional law enforcement. The ESPU’s mission was to curtail the international trade of endangered species, which uses South Africa as a conduit; by adopting a multinational approach and through the early identification of crime trends, initiate pro-active operations. Lente Roode and HESC generated funds in order to assist the ESPU with their specialised functions. Activities included investigation and prevention of criminal endeavour in respect of exportation, buying and selling of endangered species or products thereof. Unfortunately this unit was disbanded in 2003, and the unit has now been integrated into the organised crime unit of the SA Police Services as part of a national restructuring initiative, leaving South Africa without a law enforcement tool as far as environmental matters are concerned. In its short lifespan, the unit enjoyed several big breakthroughs, including against ivory smuggling rings and abalone syndicates.

Camp Jabulani and HESC are still working with the greater Kapama area to protect the species on the reserve, and have established their own ant-poaching unit. This unit is well-known in the greater Kruger area, and works with the police as well as the CIS in the Kruger National Park and several other anti-poaching units. Alb Nel is both Head of security and the Anti-Poaching Unit on the Kapama Game Reserve, and he spoke to us.

When were you born and where did you grow up?

I was born on 8 September 1981 and grew up in Great Marico and Rustenberg. I moved with my family to Graskop where I matriculated at Sybrand van Niekerk High School in Sabie.

What made you decide to become involved in nature and wildlife conservation?

I grew up surrounded by nature and used every opportunity I could to be out in the veld. It is my passion to work with wild animals and to work in nature.â€™

When and how did you start working at Kapama?

I started working at Kapama just over seven years ago. I saw an advert in the Beeld newspaper and applied for the job. I was privileged to get appointed to the position, and have thus far experienced seven wonderful years with them. It is truly an honour to work on the reserve and live out my passion every day.

What do you enjoy most about your job?

My work involves different aspects from risk management, anti-poaching to the security on the reserve. It is very important to me that I contribute towards the preservation of our magnificent nature and wildlife. I enjoy every moment that I make a contribution.

What does your daily routine consist of?

With the line of work we are in, it is not possible to have a routine. Just one phone call and the day’s planning changes completely. We start our day with a patrol in the high risk areas of the reserve as well as daily foot patrols on the reserve looking for traps and poachers. Â It is our responsibility to conduct occupational safety inspections at the lodges on the reserve on a regular basis to ensure that everything is safe and up to standard.

How many people do you have in your team?

Our security team consists out of a variety of guards including the anti-poaching unit, gate guards and lodge guards. Due to the risk involved I can unfortunately not reveal the identities and exact numbers we have available.

Do you work with bloodhounds?

In November last year I corresponded with the reserve manager as well as the owners of Kapama regarding the use of trained bloodhounds. We then purchased two dogs from Olderhill kennels close to Nylstroom. Leeu and Bruno are both trained bloodhounds, and we could immediately start working with them in the field. Both of them are dedicated to their job and are at their happiest when tracking in the veld. We make use of their skills daily especially in our war against rhino poaching. Bloodhounds track the poachers by scent, and can therefore follow the offenders tracks across rocks and obstructions in the veld, where one would usually waste time by trying to distinguish the direction where the offenders were headed. The dogs are a tremendous help to the team as they will not lose the scent until they find the perpetrator.

What successes have you had with catching rhino poachers? Did you receive any support from the SAPD?

I have been actively involved in the SAPD’s reserve force for 11 years. The SAPD contacted me (as well as a friend of mine who works at a private security company) at the beginning of December last year regarding information they uncovered of alleged rhino poachers. I received a phone call at 3 o’clock in the morning from the SAPD informing me that the poachers turned off onto the Hoedspuit/Klaserie road. The vehicle was driving at a tremendous speed, and the SAPD could therefor not keep track of it. I and four members of the private security company decided to arrange a roadblock on the R40 in an attempt to stop the vehicle. When the poachers reached the roadblock we surrounded them and forced them out of the vehicle. Four individuals were arrested at the scene. Whilst searching the vehicle we found two rhino horns, two axes covered in blood, as well as live ammunition. The suspects were questioned which led us to Welverdiend Rust where we found another suspect and the .458 hunting rifle used to kill the rhino. The suspects pointed the dead rhino out to us in a surrounding reserve. It was once again shocking to see how such this unbelievable animal could be butchered just for money! Unfortunately the four suspects were released on a minor bail amount, and will reappear in court later this year.

At the end of December 2011 we once again received information regarding alleged rhino poachers. Together with the assistance of the SAPD we were able to locate and stop the suspected vehicle just outside of Hoedspruit. We found a .375 hunting rifle and seven rounds of ammunition while searching the vehicle. The suspects are currently still held in custody.

How can we get involved?

Pro track is a private institution in Hoedspruit that offers anti-poaching training. The students gain practical experience during the course and I would therefore definitely recommend it.

The Southern African Wildlife College close to the Kruger National Park (Orpen Gate) offers a field ranger and armed field ranger’s course. The course is of high standard, and after completion, participants will have the necessary knowledge to work successfully in the field.

Stoprhinopoaching.com works hard in creating awareness regarding rhino poaching. All the shocking statistics indicating the number of rhinos poached over the period of time can be found on the website. They drew up a petition last year to prevent rhino poachers from receiving bail. You can visit www.stoprhinopoaching.com to sign the petition. 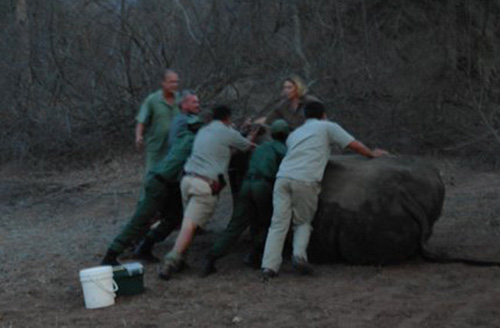 How many rhinos have been poached on Kapama?

Luckily no rhinos have been poached on Kapama. After the purchase of the Hongonyi Reserve, poachers wounded a rhino. We sedated the rhino and were able to treat the wounds. The rhino recovered fully afterwards. Approximately a week later poachers shot a white rhino cow and removed her horns. The suspects have not been caught and we will investigate until we find the culprits.

How many cable snares do you remove per year?

The illegal hunting of game with the use of cable snares has increased over the last few years. Kapama has lost a lot of game including lions, zebra, blue wildebeest and impalas as a result of the use of cable snares. A cable or wire snare will most likely be found in a road that is often used by game. Once the animal walks on the road, its neck will push through the cable snare. When the animal then tries to break free, the cable will pull tighter around its neck till the animal eventually suffocates to death. We do remove snares from time to time, but on a reserve of approximately 14 000 hectares it is difficult task.

How did the recent floods affect your work?

The floods complicated our work as the roads were damaged and inaccessible for a few days. Our fences washed away on certain areas, which created the opportunity for game to move on to the neighbouring farms as well as provide easy access for poachers to enter the reserve. We immediately all worked together to repair the fences and roads, without the loss of any game or further problems with poachers.

How do you see anti-poaching in the future?

Anti-poaching has changed drastically over the years. A few years back a poacher would have set up a snare to catch a buck to serve as food for him and his family. Now poachers are a lot shrewder. Rhino poaching has become much more organised and the reward had increased tremendously. Poachers make use of the best technology and they are heavily armed. They use of helicopters and have a lot of assistance available should they need any help. More and more people are getting involved into rhino poaching due to the financial reward. We must therefore make sure that our game rangers are well trained, have the necessary equipment to do their work properly and, most importantly, that they have a passion for nature and wildlife.