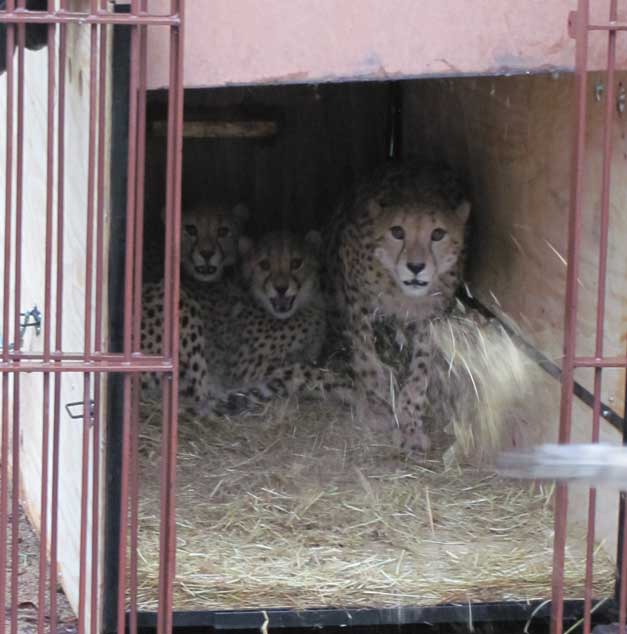 The new female cheetah with her two sub-adult cubs

In 2010, SANParks (South African National Parks) projected that some of the cheetah in the Mountain Zebra National Park would eventually need to be relocated to new homes to ensure the genetic integrity of the cheetah population as well as the park’s ecosystem.

With the necessary permits in place and a letter of support from the Limpopo Province, the cheetahs were transported in two vehicles from the Mountain Zebra National Park, near Cradock. Watched over by four staff members and supported by the expertise of Dr Zimmerman, the transfer was carried off without a hitch.

The manager of the Mountain Zebra National Park, Lesley Ann Meyer oversaw all the procedures. The cheetahs were inoculated for rabies and cat flu (fellocell), as well as being treated with Frontline plus to make sure they were free from ticks and fleas. While the cheetahs were sedated microchips were implanted in them for identification purposes.

The five new arrivals will remain in quarantine for three months before joining our other cheetahs and taking part in the successful breeding programme.

“I am thrilled to receive this incredible ‘present’, and we all truly appreciate Mr David Mabunda’s efforts in making this project a success. These cheetahs will add new bloodlines to our current stock and assist in preventing in-breeding. We aim to maintain a large enough gene pool to be able to prevent the cheetah from becoming extinct; however some of these cheetahs will also be released in areas where necessary. This is a wonderful, encouraging and positive moment for conservation,” said Lente Roode, founder of HESC.