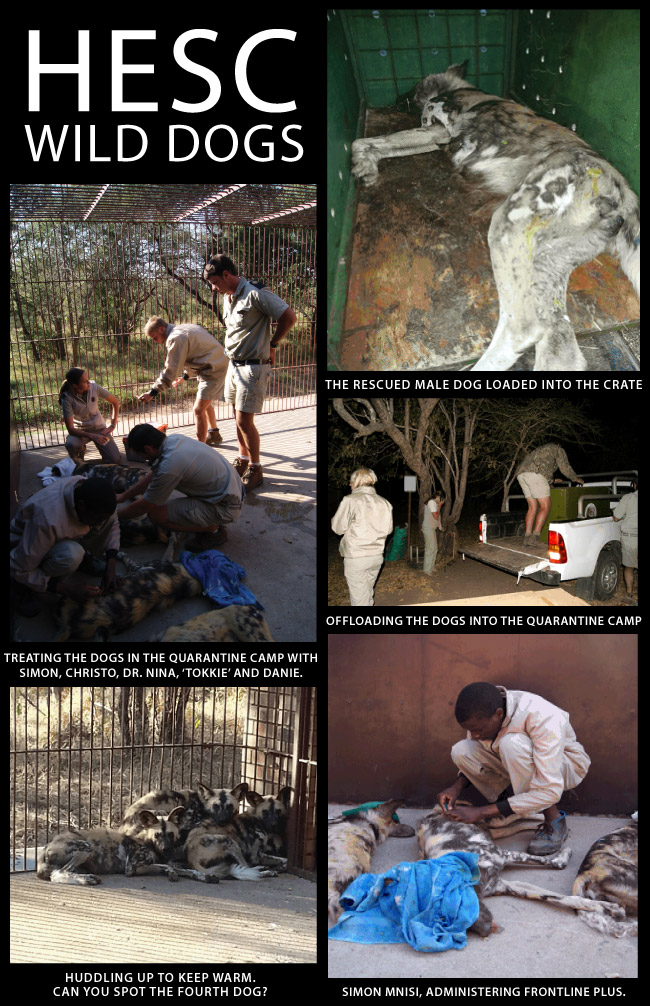 There has always been a very successful wild dog breeding programme at the Hoedspruit Endangered Species Centre (HESC). However, about five years ago, the alpha male of the pack was given a vasectomy, which is a minor operation that prevented him from fathering any pups, but left the testosterone in his system to enable him to keep his position in the pack. Even though there were no more wild dog pups born, the pack was still used for educational purposes and to highlight the plight of wild dogs to visitors – many of whom had never seen a wild dog in the flesh before.

The decision was recently made to bring new blood lines into our packs. Four of our males (offspring from the Alpha pair) were darted inside their feeding enclosure. While sedated they were given a health check as well as treatment for internal and external parasites, and a rabies booster,before being placed in quarantine. The whole team here at HESC got involved in moving the wild dogs with the curators â€“ everyone from the guides to the administration staff as well as Simon Mnisi, the curatorsâ€™ assistant.

The four new males are currently in quarantine where they will be observed to ensure that no diseases are brought into the Centre (this is just a standard precautionary measure).

We have been having a bit of a cold spell recently here in Hoedspruit, and the males have discovered a unique way to keep warm â€“ huddling up close and even lying on top of each other even when there is a nice cozy bed of straw in their enclosure!

As the saying goes, it never rains but it pours, and just when our new bloodline had arrived at the Centre, a game reserve near Gravelotte contacted HESC for assistance with their wild dog pack. Two of the subordinate males had recently attempted to stage a coup dâ€™Ã©tat and overthrow their alpha male â€“ unfortunately it did not go as they had planned, and the entire pack turned on them. The two males found themselves in hot water, and HESC were called in to the rescue.

The two dogs were darted and removed from their enclosure. It was a bit of a harrowing experience as the pack would not leave the sedated dogs or the team alone, which made loading the animals onto the ‘bakkie’ a challenging experience! Once the dogs were safely out of the enclosure, their wounds were cleaned and treated and they were treated for internal and external parasites. New microchips were placed under their skin to enable us to identify the dogs, and a rabies booster was given. The dogs were brought back to HESC, with an unplanned stop on the road to change a flat tyre, and placed into quarantine.

Our remaining five males will soon be embarking on a new adventure where they will continue to educate and inspire future generations about these magnificent ‘painted dogs’ of Africa! The six new males will be the foundation of two new packs at HESC, and with our current resident females, who knows what the future holds? Maybe their offspring will one day roam free in the African bush!