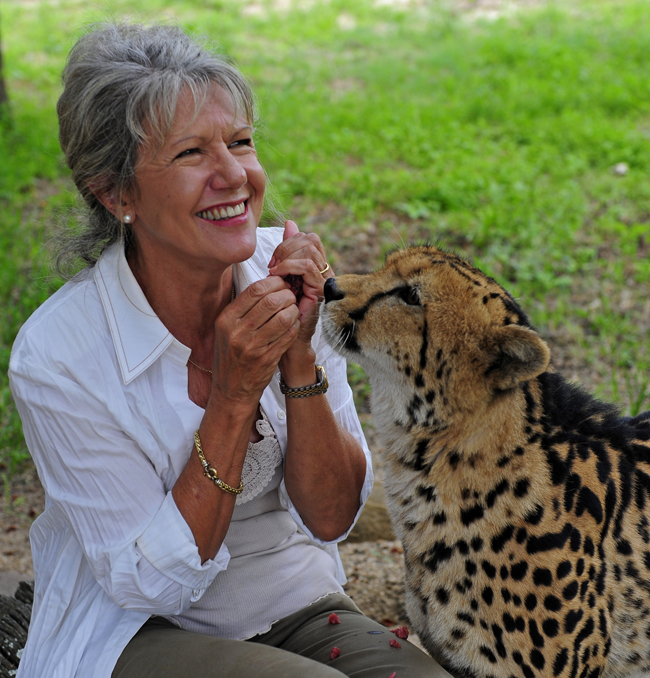 Many people around the world speak of a woman in Hoedspruit who communicates with cheetahs but this is no old wive’s tale.

Whether fact or fiction, we at Hoedspruit Endangered Species Centre (HESC) know one thing for sure. Mrs Lente Roode, founder of HESC, has a special connection with cheetahs whether bred in captivity, or in the wild.

In 1950 Lente Roode’s father, Willie Schurmann, bought a 2000-hectare farm in the Hoedspruit district of the Northern Province of South Africa, which today forms part of the Kapama Private Game Reserve (situated close to to the Kruger National Park in South Africa).

It was during her childhood that Lente developed a great love for animals, the African bushveld, and for the farm which she visited at every opportunity. The seeds were sown for a life-long passion for wildlife conservation, and in particular the conservation of the cheetah.

As a child of six, Lente was given an orphaned cheetah cub after a neighbouring farmer shot its mother. They called her Sebeka, and she soon became part of the Schurmann household. Together, Lente and her mother (a nurse) lovingly cared for the animal. Lente and her cheetah were inseparable.

HESC focuses on the conservation of rare, vulnerable or endangered animals. Cheetah Conservation is one of the core disciplines, and the Centre has established itself as one of the leaders in the breeding and research of endangered species. Besides the breeding programme, the Centre also provides a safe haven for orphaned and sick animals, as well as operating as an education centre where the public and South Africaâ€™s younger generations get to learn about endangered species and the importance of conservation by observing them at close range.

This all as result of the passion of one womenâ€¦

This year it’s Lente’s wish that women from all around the world visit HESC, and get the opportunity to experience the wonder of mother nature, and her exquisite animal kingdom, first-hand. A 50% discount is offered to all female visitors who visit the Centre between 8 am – 3 pm on Thursday, 9 August 2012.

I wish every woman a Happy Women’s Day! The Power of One is Boundless.

HESC to the rescue