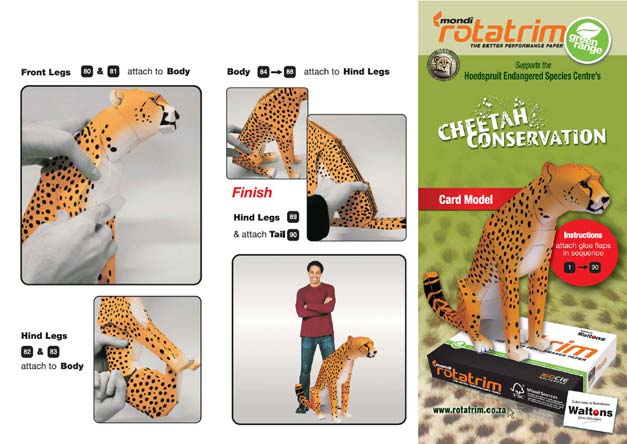 From the 1st of August to the 30th of November 2010, Mondi Rotatrim will donate 25c for every box of paper bought by Waltons (Gauteng) to the Hoedspruit Endangered Species Centre.

In conjunction with this, Waltons is running an in-store promotion and staff were asked to get creative with the life-sized cardboard cheetah supplied by Mondi. The stores went all out in a bid to win first prize in the ‘best store display’ competition.

And with prizes totaling a massive R10,000 who can blame them?

The winners will be announced at the end of the promotion and we’ll be posting the winning photos here on the blog.

Waltons has also donated a lump sum of R30 000 towards this worthy cause.

Read the comments below, and have a look at the Mondi-Waltons album on our Facebook page to see all the photos that were sent in.

“It’s been a real pleasure to receive the photos from the participating stores and see all the effort the the staff have put in. They’ve gone all-out! Although I did receive a few emails informing me that they feel they should be awarded a degree in engineering. Apparently assembling Mondi’s cardboard cheetah was a bit more of a challenge than anticipated. It sounds as if the event has definitely been a team effort.” Sue Howell – Regional Marketing Manager, Waltons Gauteng, JHB

“Thank you so much for all of the pictures that have been coming through – we have been blown away by the creativity and effort that we have seen in the displays. There have been some very interesting and creative ‘interpretations’ – not least of which was the one in the leopard print! What is particularly gratifying to see was all the teamwork that went into assembling the cheetah and building the displays. Once again – thank you to everyone from Waltons for your very active participation in this promotion.” Gary Nossiter – Marketing Manager, Mondi

“At Modderfontein we had four teams. Out of each team, two members were sent out to collect rocks, grass and shrubs from our nearby forest. The rest of the members had to stay behind to build and paint our cheetah. This was all done on Thursday afternoon, and everyone made a tremendous effort to put this project together. The entire process took three hours to complete!” The Modderfontein team

One person really can make a difference