Her Royal Highness Princess Michael of Kent is visiting the Hoedspruit Endangered Species Centre (HESC) prior to launching her book A Cheetah’s Tale in Johannesburg on 28 March 2018.
Princess Michael of Kent’s association with Lente Roode, founder of HESC and Camp Jabulani, goes back many years and as the Royal Patron of the Hoedspruit Endangered Species Centre she has visited HESC on numerous occasions. 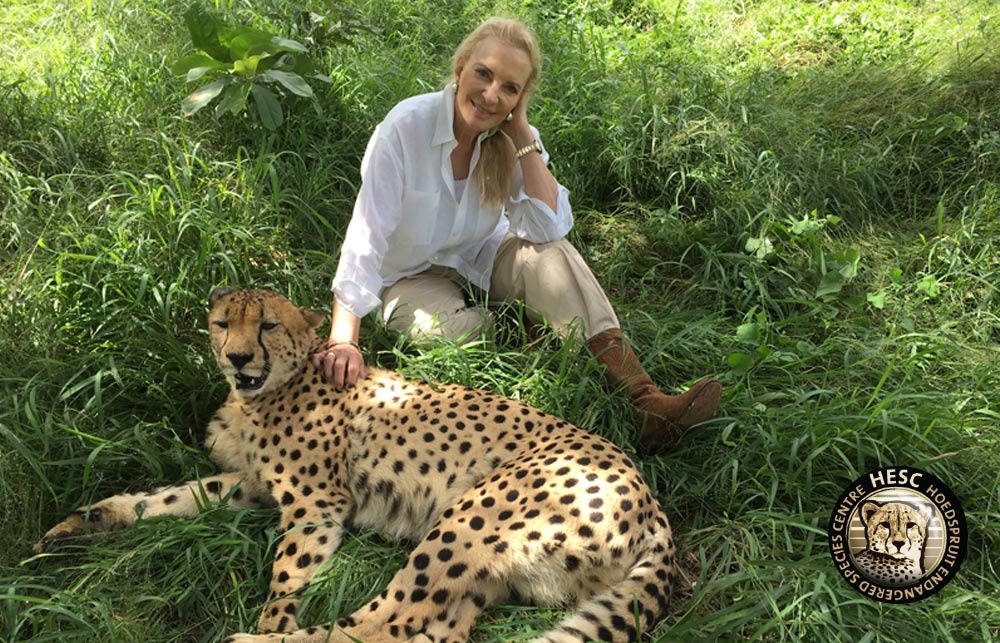 Princess Michael has a long association with HESC. Here she poses with one of our cheetahs on a previous visit.
Photo courtesy of http://www.princessmichael.org.uk/books/a-cheetahs-tale/

The princess’s passion for cheetahs and a lifelong interest in conservation developed when, as a young girl visiting her father’s farm in Mozambique in the 1960s, she was given an orphaned cheetah cub to raise after its mother had been caught in a trap and died. She hand-reared the little cub and later released it into Gorongosa.

The book describes aspects of the early life of Marie Christine von Reibnitz (who would later become HRH Princess Michael of Kent) travelling in Africa and raising her beloved cheetah cub.
The princess dedicated her book to Lente Roode and Laurie Marker, “My cheetah muses and my constant inspiration”. Dr Laurie Marker is Founder and Executive Director of the Cheetah Conservation Fund.
Asked how this book can contribute to the conservation of cheetahs, Lente Roode said any book that provides an understanding of the cheetah will in the long term contribute to the conservation of this endangered species.
“I am in full support of any initiative aimed at creating awareness of this magnificent animal that both the princess and I so dearly love.”