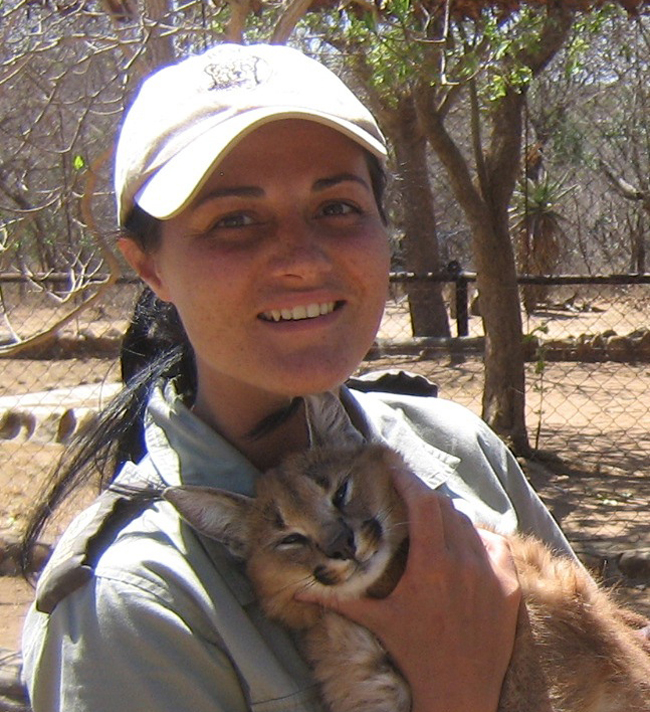 Before Ilana joined the HESC team, she was really active in the tourism industry. She worked as a guide on two reserves – Lalibela in the Eastern Cape, and Entabeni in The Waterberg, as well as managing guest houses in Mpumalanga and Limpopo. Having been in the industry for almost 6 years, she has seen and experienced the beauty and excitement of the bush and life in Africa, with all its happy, sad and breathtaking moments.

She has been at the HESC for 14 months now, and says falling in love with “this place” has been very easy – she loves it here! Ilana’s daily routine is varied – mostly she acts as a guide, doing tours of the Centre, night game drives on Kampana, and school tours, but is also on hand to assist with filling roads, washing aloes, driving staff around, checking the guest houses and tents before the arrival of visitors, or helping out in the curio shop when Trudie goes on leave. Her favourite work is when she gets to help the curators with the animals.

The most interesting thing that Ilana has seen while at HESC took place while she was on tour with a guest one day. They witnessed two yellow-billed kites attacking a juvenile Tawny Eagle. Not understanding what was going on, they drove closer to investigate and discovered that the Tawny Eagle was close to the Kite’s nest – something the latter didn’t appreciate at all! After watching the battle for a while, they drove along further and came across a mature Tawny Eagle finishing off a meal of Helmeted Guinea Fowl! This is just one of many special – and sometimes funny – things that Ilana has witnessed while at the HESC.

Many guests ask Ilana which animal is her favourite, but she feels that all the amazing animals in the Centre have crept into her heart – they all have unique personalities, and are special in their own right.

Ilana plans to stay at HESC for a while, learning as much as she can while here. Her dream is to undertake more intensive studies of animals and their behaviour, and even have her own centre one day. Making documentaries of animals also features in her future plans.