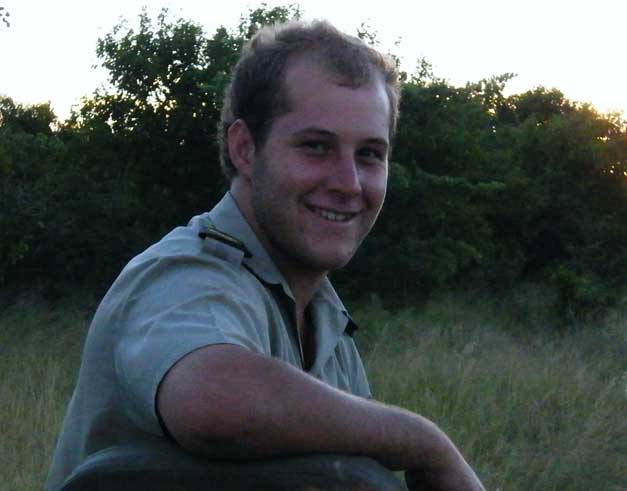 Jaco has been a field guide at HESC for four months. He is currently studying Game Ranch Management, and he’s chosen to do his year of practical training at the Centre. It’s an intensive four year course, comprising two years of theory, a year of working, and then another year of full time studying. Once he’s completed his studies he hopes to become a section ranger in one of South Africa’s many Big 5 private game reserves. His positive attitude and excellent work ethic are sure to go a long way in helping him achieve his goals.

Since starting at the HESC Jaco says he has learned and experienced many new things. And in-between the long hours he puts in, this hard worker still finds the time to fit a game of rugby at the local club. “HESC is a great place for learning, as well as a stepping stone in life,” says Jaco.

Jaco grew up in George in the Western Cape, but always knew that he’d eventually make his way to the lowveld and realise his dream of working in the wild, untamed bush. Now that he’s here, he can hardly believe that he’s had so many great experiences in such a short period of time.

One experience in particular that stands out for Jaco was when he and a colleague came across four lionesses on a game drive in the Kapama Game Reserve. The pride was walking along the road towards their vehicle. Jaco was sitting on the tracker seat, and before he knew it one of the lionesses was less than a meter away from him. She looked him straight in the eye for just a moment, before continuing on her way past the vehicle. What a memorable moment.

He cites going swimming with work mate Werdy as the most fun he’s had at HESC so far. The pair decided to go for a dip in the dam one night after some heavy rains. They’d just gotten in when Werdy let out a shrill scream. Apparently a terrapin was to blame for the commotion.

GETTING TO KNOW THE POWER COUPLE BEHIND U.S. FRIENDS OF HESC