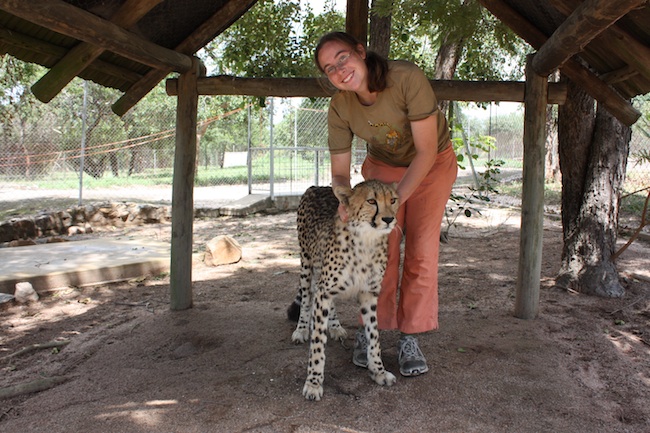 After introducing our January student, the staff subsequently kept her so busy that she only managed to send us one update in-between all the chores and sightseeing. And then the rains came and we didn’t hear from our lone adventurer again until this week! We’re pleased to say that everyone at the Centre survived the floods, but unfortunately with the electricity being out for long stretches at a time, Marnel hasn’t been able to send us any photos. They’re definitely on the way though, so we just need to exercise a little patience!

I hope I remember where I left off in my last update.  So much has happened over the past few days that rather than try and write about everything, I’ll just mention my top four days (not ranked, but in chronological order from oldest to newest).

1) I was helping supplement the cheetahs’ meat one morning when Christo called me away to come and observe the vet perform a routine check-up on five of the Wild dogs.Â It was interesting to see how smart these animals are; even before the vet arrived they were hesitant to come into the feeding area. One even refused point blank! Luckily the vet eventually managed to get them all sedated so that he and his assistant could gather blood samples, give them a thorough going-over, and then administer their rabies shots.  Later that same day I helped move four young cheetahs into a separate enclosure.

2) A day in Kruger National Park!  We saw some exciting things like a hyena, Black-backed jackal, cheetah, and even an elephant having a dust bath.

3) I went on a game drive on Kapama Game Reserve, where I saw buffalo and a group of lions consisting of a male, a female, and two adorable cubs! I even got to view two rhinos from very close up.  The day ended with a delicious potjiekos and wonderful braai with staff.  AWESOME!

4) A cyclone hit the Mozambique coast, which in turn caused a deluge of rain in our parts. Thankfully nothing more than the roads flooded at the Centre. Our electricity supply was cut off, and lodges in the surrounding areas had to use helicopters to evacuate their guests. The HESC staff made the best of the situation however, using the day with no tours to go out in the truck to assess how much damage had been done. After everyone had a chance to dry off (we got SOAKED), we all got together for a braai. It was the first dry day we’d had in two days (although the power was still off), so we took advantage of the one means of getting warm food.

Now all that’s left is packing.  It has been a good three weeks. Remember to visit Facebook or Flickr to see what I’ve been up to!

A donation to HESC & WCT from The Platter Project