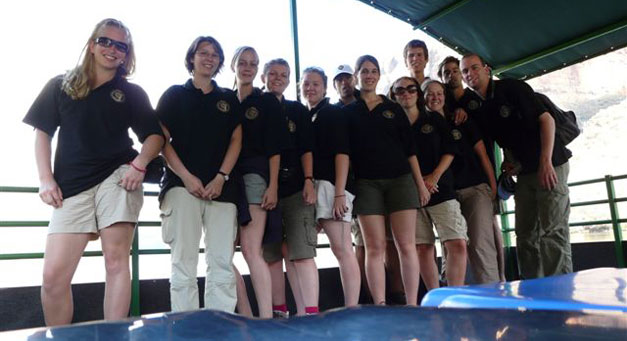 We are a multi-cultural group of 12 students from England, Austria, France, the Netherlands and the United States.

Antonin is from France and has already proven to be a deft hand with a paintball gun. Much to the chagrin of the others, who are all sporting bruises because of him. Frankie, Lily, Eliana, Amy, Sara and Jane all hail from the United States. As do twin brothers Roger and Alexander and Natalie who managed to ran into a fence recently (more on that later). And finally there is Quint who is from the Netherlands and Julie who is from Austria.

Mondays, Wednesdays and Fridays we feed the animals. This means butchery duty, which smells. But even so, it’s still a good experience because we get to see the big cats eat!

So far we have been on excursions to the Blyde Canyon, the Moholoholo Rehabilitation Centre and the Khamai Reptile Park. The outings have all been a minimum of 45 minutes away, which has been a great opportunity to see the surrounding areas. All our trips thus far have included animals, and they always remain a surprise till the last moment.

In the evenings we sit around the campfire and prepare traditional South African food. So far the highlights of the trip include a visit to Moholoholo, where we saw a baby hyena, fed a cheetah and met a baby rhino. Weâ€™ve all thoroughly enjoyed the trip so far and canâ€™t wait to see what the rest of it holds in store for us. Even the early mornings, running into fences and paintball bruises haven’t been able to put a damper on our spirits.

Hornbills at HESC – In love or not?

The power of one is boundless