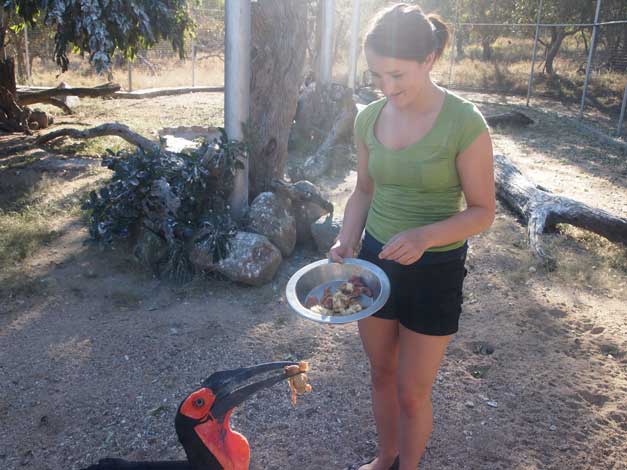 We’ve welcomed another two students to our June intake. You can read more about mother and daughter duo, Gerriann and Nikki Smith, in the introduction post. Suffice it to say they’ve travelled all the way from San Francisco to visit our fair shores, so let’s hope their trip is everything they wished for and more! They’re only staying for a few days, but hopefully they’ll treat us to at least one update before they leave. In the meantime Amber has been really busy working, sightseeing and feeding chameleons. She has this to say about her adventures.

Another amazing week has gone by here at HESC! I have gotten to be close to some of South Africa’s most dangerous snakes and have learnt so much about reptiles. I have a whole new appreciation for them.

A cheetah here at the Centre that was sick for some time was euthanized* on Friday. I was permitted to watch the procedure and ask questions. I also witnessed the post-mortem that followed. Today the injured lion that came last week has a vet coming in to do work on him. Once again, I get to watch, and am so exited to see what happens.

I came to South Africa to see if I really wanted to work with animals in my future. After this past week at HESC and the Kruger National Park, I’m sure it will be a part of my career in some way. I’m loving it here at HESC! Remember to visit Facebook or Flikr to see more photos of my exciting adventures.

* An autopsy later revealed that the cheetah’s heart had stopped. Further tests are being done to establish the exact cause of this.