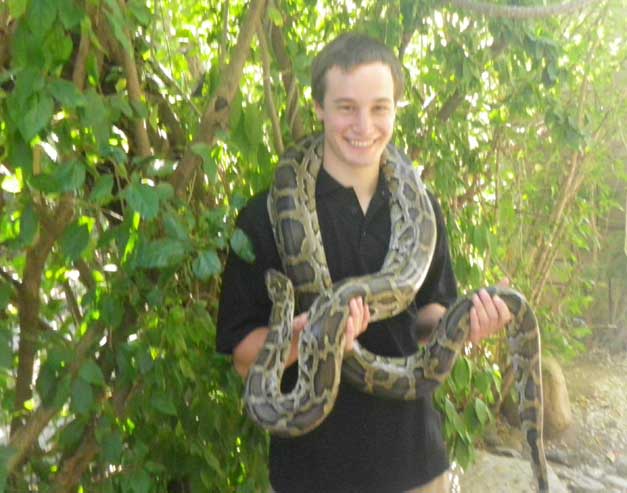 In their first update our new students told us that they’d decided to split themselves into two groups. We’re still no closer to finding out the reason for this, but at least Group B have a name. They claim they shall henceforth be known as Team Pronk.

Seriously? Having never come across this word before I deferred to the Oracle for insight, but I’m still no closer to understanding.

Another week has flown by all too quickly. After a few days on the job it soon became apparent that we were the best when it came to our daily butchery duties. Sorry Group B, but you’re going down! The week kicked off on a high note when we visited six naughty cheetah cubs at the boss’s house. We fed them, cuddled them and kissed them, before being dragged away by Karen. After such an amazing day we were sad to hear that one of the Black-footed cats had passed away. The next day we witnessed the post-mortem* which was really interesting. We were then surprised with a visit to the Khamai reptile park where we learnt loads from curator Chris, who claims that snakes are cool. Some of us faced our fears, while others of us just looked on in a mixture of awe and horror.

Next on the cards was a game drive. We didn’t see much but it was still fun. When we visited the Kruger National Park we were very lucky to see the Big 5, which included two sightings of the notoriously elusive leopard.Â  One of them ran right in front of our vehicle, which was really amazing! We are pleased to announce that the top spotter on the day was Lauren (a.k.a. Swazi) who is part of Group A. Another highlight was getting up close and personal with the Centre’s two resident caracals and giving them a wee stroke. We also went on an adventure to a waterfall where we took part in rock climbing, hiking, dancing on logs, and swinging on bridges. One “special” individual also managed to add slipping into the ice cold water to their list of achievements. To top off the week we took Tinga the cheetah to the vet. Hopefully she’ll make a speedy recovery! Next week our main wish is to have the six cheetah cubs come live at HESC before we all leave. They’re about two months old now, which we think is the ideal age for these mischievous characters to join us. Here’s hoping.

Wow this last week been really busy, and it all started with a visit to Mrs Roode’s house where we met six cheetah cubs running around freely. They were so cute! We could have stayed there all week. Thursday evening we went on a night game drive, the highlight of which was seeing a caracal and some buffalo. And we almost lost Natalie when she got stuck in a tree! We also went to the Khamai Reptile Park where we learnt about snakes and what to do if we get bitten. We each had a photo taken with a python draped around our necks, and all of us walked away feeling as though snakes were our best friends.

Snake whispered made us go to the snake side of life!**

Saturday was Kruger National Park day! Waking up at 4:30 am is not fun, unless you’re planning on seeing the Big 5 twice!. like we did! At the end of the day, after we’d already seen the Big 5, a leopard crossed the road in front of us. Amazing! Seeing the Big 5 twice made history in the Student Program. We have also been hard at work in the butchery, and speaking of which, Group B made a new record for completing our butchery tasks in one hour instead of three. Go Team Pronk!

We also went to the veterinary surgery where we witnessed the post-mortem of a Black-footed cat. Even though the cat passed away, we consider ourselves very lucky to have witnessed this. We ended off the week with a visit to a waterfall, and then relaxed and played games back at camp. Now we’re off to feed the small cats.

Remember to visit our Facebook and Flikr albums to see more photos of all the crazy stuff we’ve been up to.

* Dr Rogers performed the autopsy on the Black-footed cat. We are still waiting for the results to determine what the cause of death was. Tinga is still at the vet and we’re waiting for feedback on her as well. We’ll keep you posted.

** I have no idea what Group B is on about and can only surmise that they found Karen’s stash of witblits.