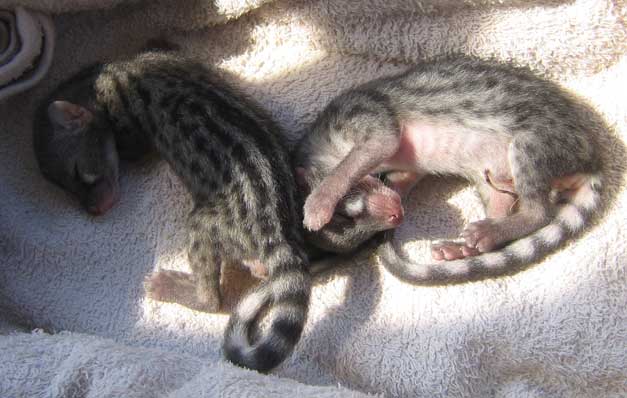 Fudge and Felix having a nap in the sun

Victor van Wyk recently found two Large-Spotted genet babies in his garden. After a thorough search he ascertained that the mother was nowhere to be found.

He lives in a busy neighbourhood, where there was a very real chance of them getting caught by a dog or cat. So he decided the best thing to do would be to take them to HESC.

When we opened the box the first thing we noticed was their very long tails. The poor creatures were trembling and mewing loudly. And with their eyes still closed, and no Mom on hand to comfort them, they were naturally quite distressed.

Three days later Victor phoned us again. He’d found another tiny genet, and it was soaking wet from the previous night’s rain.

When we heard this we expected the worst, but this little guy turned out to be a fighter. Not only did he pull through, he also ended up being the strongest of the three.

Victor and his family named him Milo, and he is currently being cared for at Camp Jabulani.

When the genets first arrived they weighed in at a mere 80 grams each, which meant feeding them was a real challenge. It took quite some convincing to get them to drink the milk formula. Getting them to urinate and defecate wasn’t a walk in the park either, but before long they were ‘going potty’ like real pros. Much to the dismay of the guide that picked them up and got a wet sleeve for his efforts.

Their eyes are open now, and it’s also becoming clearer to us why they are so well suited to living in trees. Using us to practise on, they expertly clamber up, down and around our arms and shoulders. But their best thing by far is to be picked up by someone with long hair. For some reason they just love cuddling and snuggling in the long locks. The result is messy, but they’re so sweet we just can’t say no.

Our spotty additions are an absolute joy, and we can’t wait to watch them grow up. Visit our Facebook or Flikr albums to see more photos of them.