South Africa – our country, our land. It is such a beautiful country to reside in with fields of nature enveloping the soil and creating rich forests for all our animals. Our country boasts with the biggest, most robust animals – like the elephant and rhinoceros – which leave you feeling mediocre in comparison to their size. Even the smallest creatures have to be admired for the incredible roles they play.
Unfortunately, not all humans share this sentiment as various parts of our country are largely targeted for poaching. Up to 30,000 African elephants are killed each year for their tusks; that’s one every 15 minutes, a rate that herds cannot sustain. Our rhinos are also left destitute as 80% of the world’s population, residing in Southern Africa, are killed at a rate of three rhinos a day. Rhino horn is now worth more than gold and it is shocking to think that it’s the same material as hair and fingernails.

Trumpets and Horns is a campaign launched by the Hoedspruit Endangered Species Centre (HESC) to focus on the poaching crisis and the resulting effects it has:
•  Poachers are expanding their range and although poaching in general has taken a significant dip in the Kruger National Park, it is increasing in other areas.
•  Difficult socio-economic and political climate facilitates poaching
•  The most recent annual stats show that there is a specific decline in rhino poaching, but 1054 rhinos were still slaughtered
•  Roughly 30 elephants were poached in the Kruger National Park in 2017 as apposed to the 22 of 2016. It seems that poachers are now more actively setting their sights on elephants.
•  Poachers often purposefully poison carcasses of their kills leaving other animals, such as lions and vultures dead after eating the meat.
Our newest rescue successes of the past year are Mopane the little elephant and Esme the baby rhino.
Mopane
Mopane came from the Kruger National Park close to Phalaborwa after he was found wandering alone and was visibly very weak. HESC was immediately contacted and Mopane was brought to the centre. Since he was only 3-4 weeks of age and still very young, he was treated for an infected belly button. He was hydrated and given food. Mopane is drinking his bottle properly now and continues to slowly put on weight. Mopane will be closely monitored to get him past this critical stage of his life but will later be introduced to the Camp Jabulani herd.
You can see by Mopane’s strength that he is a fighter. During all his progress it has been established that he enjoys playing with the elephant groom from CJ and usually runs after him. 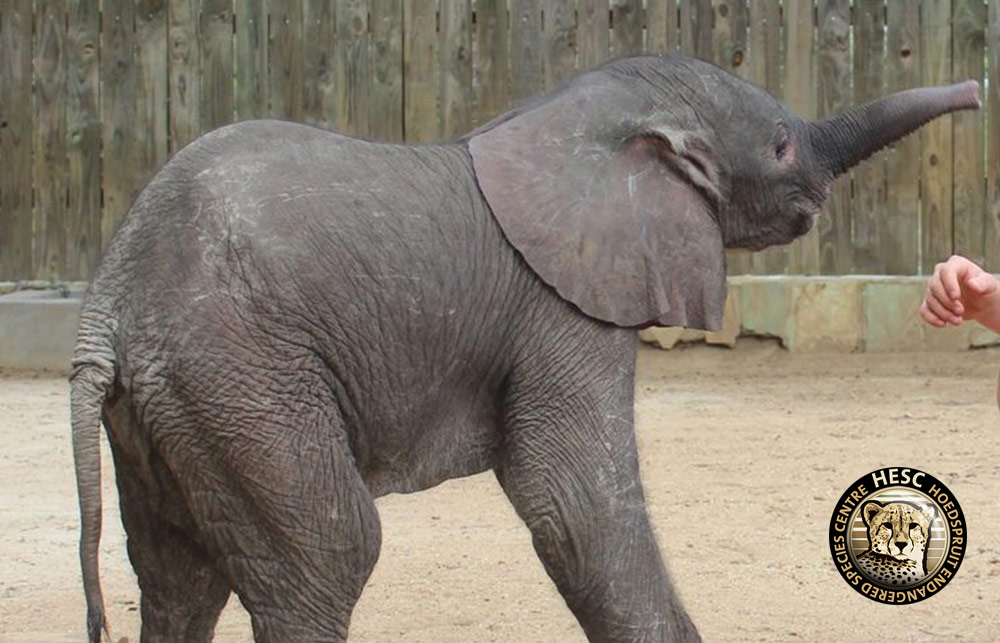 Esme
Esme came from a reserve near Tzaneen – the exact location is confidential to protect other rhinos in the area. Although she was suckling from her mother she was losing weight and her health was rapidly deteriorating. The decision was made to bring her to HESC where she was treated for dehydration and serious lack of nutrition. Esme’s skin also suffered due to the lack of nutrients in her diet, which has since been treated with mud and baby cream. Her skin condition is constantly improving. HESC’s current focus is getting her back to optimal health and weight. Her future will still be discussed and carefully decided – always with her best interest at heart. Our little Esme is a real lady and she has a very calm personality. She thoroughly enjoys her daily walks through the centre and it is usually towards the end where she gets a spurt of energy. She showcases her silliness by running ahead, then turning around and running back. 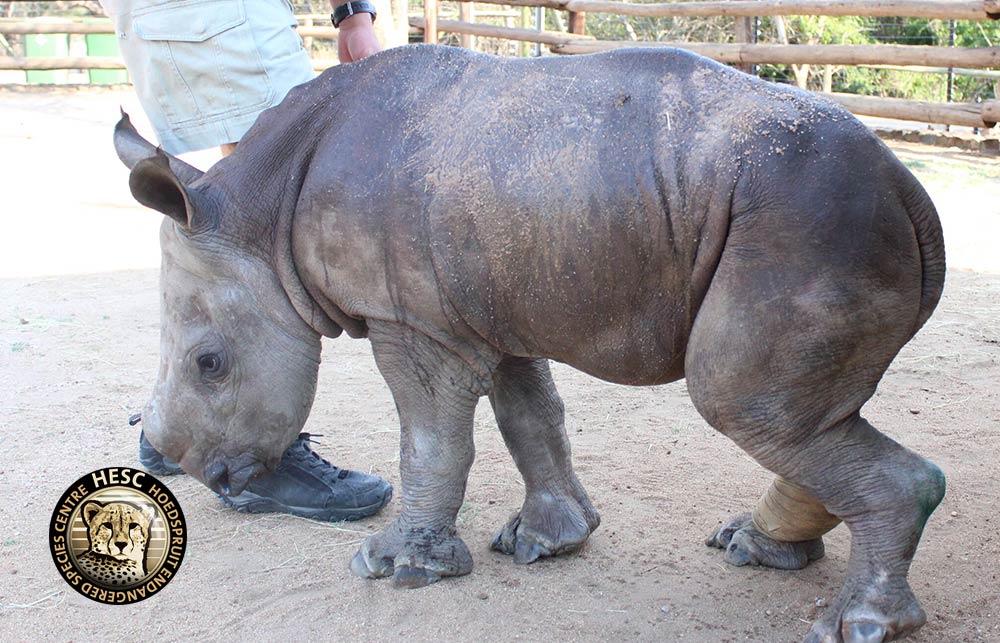 Our best success stories must also be named:
Jabulani
The name-sake, Jabulani arrived a few years ago after he was found in a drain pipe by the mine in Phalaborwa. Jabulani was rescued and brought to HESC where he was raised. After an unsuccessful introduction to a wild herd on the Kapama reserve, he was introduced to the Camp Jabulani elephant herd. He was accepted with open trunks and is now a one of the most trusted elephants amongst all the elephants at Camp Jabulani. 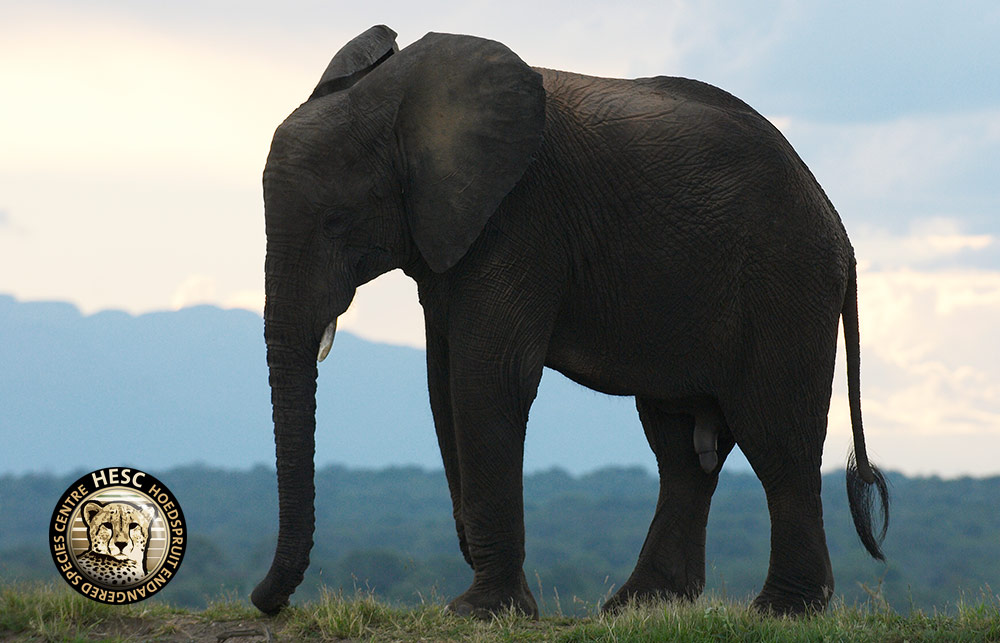 Lions Den and Dingle Dell
These unfortunate rhinos survived a horrendous poaching incident. They were darted by the poachers and had their horns hacked off. They were rescued and brought to HESC where these two went through roughly 40 procedures to help fix their noses. After a number of setbacks, such as infections, the procedures were ultimately a success and their horns have started to grow back. They are very cautious around vehicles and people because of the ordeal they have been survived. Much like other rescues at HESC their fighting spirits are evident. 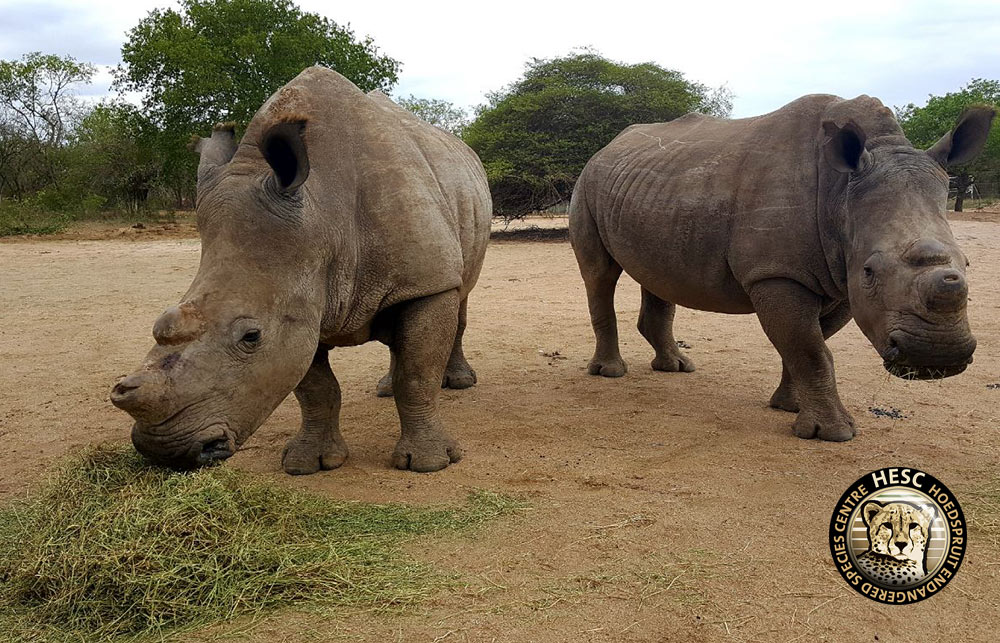 HESC is living proof that people can make a difference to the long-term survival of the planet and its animal inhabitants.
Support our noble cause and make some noise to help look after the trumpets and horns of the world:
https://help.hesc.co.za
Sources used:
https://www.news24.com/SouthAfrica/News/poachers-latest-target-20170827-3
http://www.tusk.org/poaching-crisis?gclid=Cj0KCQiA1afSBRD2ARIsAEvBsNmevzhUwBuGiBgJnZk56ejQC3M2xftzj1Ib6G_6CcZabCe82JvY-aIaAhXhEALw_wcB
https://www.savetherhino.org/rhino_info/poaching_statistics