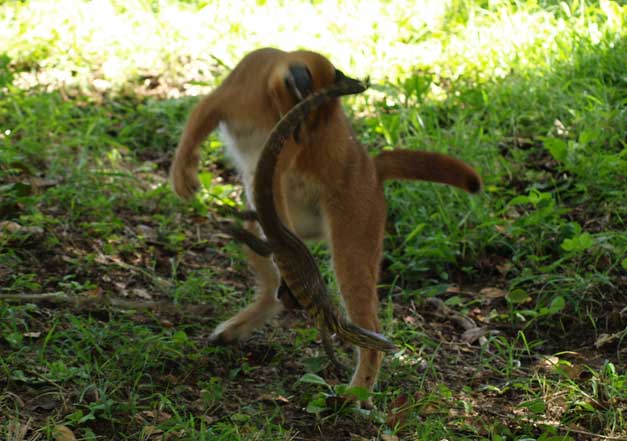 A caracal takes on a water monitor

During feeding we found that a water monitor lizard had found its way into the enclosure of two female caracals. One of the females proceeded to hunt the lizard down, although it soon became apparent that she just wanted to play with it. We’d just fed them, so it was unlikely she was hungry.

The lizard was not very big, but still quite a mouthful for the cat. It was like watching a boxing match, with both opponents eyeing each other from their respective corners. And then going at each other when the gong sounded.

At first we assumed that the lizard would be a pushover for the much bigger caracal, but we soon discovered that this wasn’t the case. Whenever the cat got close to the lizard it would position itself so that it had a good change of whipping the cat’s face with it’s tail. Something it managed to do a number of times.

It caught the cat on the chin and chest, and even got in a bite or two, which went a long way to unsettling the caracal. But proving itself to be a worthy opponent, the caracal soon regained the upper hand. Grabbing the lizard by the scruff of its neck, the agile cat jumped around and flung the poor reptile back and forth.

Eventually we decided that it was time to intervene, as the “play fighting” was going a little too far. We are working as conservationists after all!

Kristine went in with Marlize and – using the skills she’d learned in the snake handling course – caught the lizard. She then released the dazed reptile on the “right” side of the fence, and it promptly scuttled off in search of a quiet spot to recover from the shocking event.

Last Friday morning twelve students from the Paulos Ngobeni School visited HESC. After taking them on a tour around the Centre,we introduced them to the tortoise, vultures and Ground hornbills. As English isn’t their first language, their teacher enthusiastically translated everything we told them!Â  HopefullyÂ  the children enjoyed themselves and were able to take away something positive from the experience.