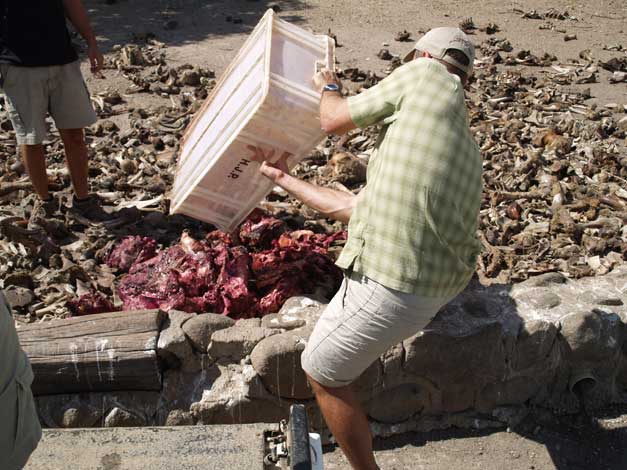 Last Wednesday was a day that Karen and Tabs had been working towards for months. It was the day that the Paulos Ngobeni Primary School was to receive the computer donated to them by the US friends HESC. Special guests inÂ attendance were Mrs Lente Roode – founder member of HESC, and Heidi and Alan Roberts – founder members of the US friends HESC.

The learners put on a fantastic show, and everyone was filled with jubilation and excitement. An Air Force helicopter from the 19 Squadron landed on the school’s sport grounds, much to the delight of the children who were standing just a few hundred meters away. During the official presentation the Air Force members gave the school a pair of boots, which represented the “leave a footprint” campaign between the school and the wider community. Its aim is to help the school with much needed resources, such as the computer for their computer room, which up until yesterday stood empty. Hopefully we’ll hear more about their progress in the near future.

Gathered for a feast

Tuesday was our first day of feeding the animals. The menu at the “vulture restaurant” was offcuts and bones from the beef we’d given the big cats. The crowd of excited birds, which consisted of about 200 Marabou storks and various kinds of vultures, were all eagerly waiting at the entrance. And once the restaurant opened they fought vehemently for prime position.

The wild dogs weren’t forgotten either. They were treated to a whole lamb, which pleased them no end. They followed the truck along the fence, yelping and squealing excitedly. When we threw the meat over to them the two pack leaders latched onto either end and a tug-of-war ensued. In the end they all get their fair share though, wild dogs are sweet like that.