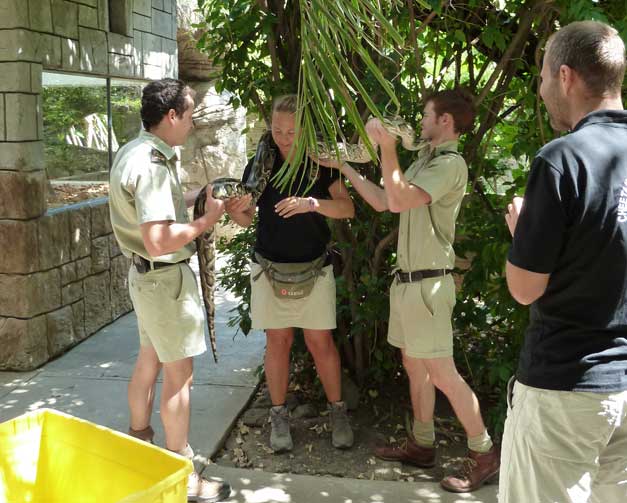 Part of the HESC Student Programme is a day visit to the Khamai reptile park. Our VIP visit included a snake introduction, as well as several other “hands-on” experiences, such as holding baboon spiders, scorpions and allowing a python to drape itself around our necks. We also learned how to catch a lazy, but still very dangerous puff adder.

Kristine and Christian had such a great experience that they decided to learn more by signing up for a snake handling course the following day. Crazy or brave?

The snake handling course was VERY hands-on. It was built around practical and real life situations, like getting a snake out of the toilet.Â They only ever do the course with a maximum of two people, so the snakes are “fresh” for each student.

Chris the snake curator and his volunteer Jim, who’s job it was to assist in the training scenarios by playing the annoying drunk (it’s not known if he was actually drunk or not) in order to complicate matters, and ultimately make it more difficult for us to catch the snake.

After some initial theory (not much though), we learned how to use the catching equipment and played around with a fake snake (piece of rope). Once Chris thought we were handling the rope like a couple of pros, he started us on the real thing. Not one to fool around, he immediately threw us in the deep end.

He’d hidden a cobra for each of us somewhere in the small house where Jim was staying, which was full of stuff to complicate matter (bike, fan, ironing board and so on). Kristine caught the first one, which was a snouted cobra, but it didn’t want to go in the box and kept escaping. Initially Kristine got a bit nervous of the snake moving so fast around her, and her sudden jumps didn’t help the situation as the poor thing got even more rattled than she did. She calmed down once she realised that the snake just wanted to get away and hide, and had no interest in coming after her. As Kristine relaxed, so did the snake, and then catching it was a breeze.

After watching Kristine’s cobra move around her at such speed, I was even more nervous when it was my turn. Luckily my spitting cobra just lay still in the bath waiting for me to pick it up. No spitting or anything. Chris had expected the opposite of the two snakes, thinking the first would be easy and the spitting cobra – being a bit more active – would prove more difficult. Though generally predictable, it just goes to show that you never know exactly how they will behave.

And when they say they always use fresh snakes, that’s exactly what they mean. All the ones snakes we worked with had been caught in the wild just days earlier. Apparently people in the area call the reptile farm on a daily basis to get Chris to catch a snake in their house or garden.

Chris was with us every step of the way just in case something went wrong. But as he said afterwards, he couldn’t have done much as things were moving fast, and he couldn’t know our movements. By the end of the day we had each caught a puff adder, two cobras (snouted and spitting), a boomslang (once in the parking lot and once from tree), a rock python (a bit of wrestling was required) and a monitor lizard (strong fellow). The last snake was the black mamba which we weren’t allowed to catch, but only “play” with in a tree. This was so we could learn what to do should we ever find ourselves in a situation where we needed to catch one. Catching a black mamba is more complicated, as its length means it requires more experience than we currently had under our collective belts.

At the end of the course we were assessed to see how well we’d done. In order to pass we had to be able to catch a snake without any help. We were sent into a shed full of gardening tools and loads of other crap to find a snake, while the “owner” (Jim) was hovering close by and distracting us with stupid questions and just being in the way. Chris watched us from outside.

We both walked away without any bites, so that obviously means we passed! Whoop!

Most of the students in the Programme spend their off days doing things like tubing down the Blyde River or playing paint ball, but it’s hard to imagine that you can get any more of an adrenalin rush than catching a 2m snouted cobra that has just reared up in front of you. Wow! A highly recommendable experience, but not for the fainthearted. 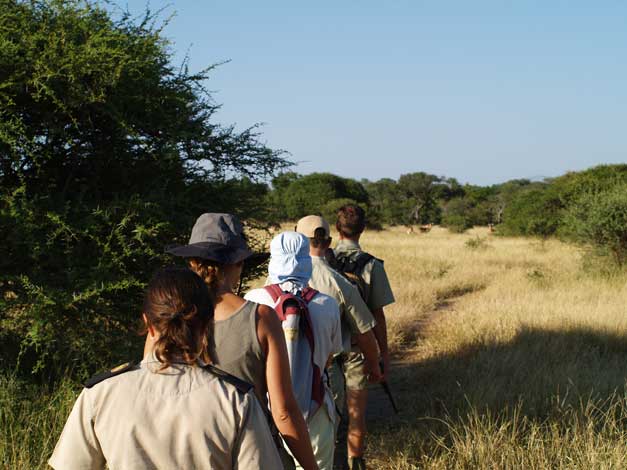 We set out from Camp Jabulani at 7am with two rangers and an array of general game, such as giraffes, impalas, zebras, wildebeest and warthogs. We looked at different tracks and soon found some fresh rhino spoor. We followed the tracks easily on the dusty roads, but things got more difficult when we moved onto the grass. We lost the tracks for a while, but after a few ‘misfires’ we found them again. They led us to a mud hole, where it was obvious that two or more rhinos had recently been lying. After another 15 minutes we found the mother and her calf. It was a great experience to track the animals ourselves, and all in all it took us about an hour and a half to find them. The reward of admiring the two rhinos – from a safe distance – was well worth the effort though. 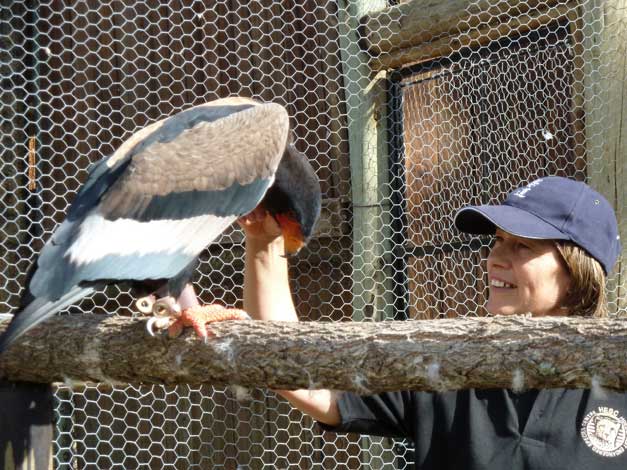 Hetty with a bateleur eagle

The Moholoholo Rehabilitation Centre is a mere hour’s drive from HESC. While they rehabilitate a variety of animals, their main focus is eagles and vultures. Brian – the founder – gave an interesting talk which highlighted the main problems with conservation. The biggest being the lack of habitats. Even Kruger National Park is to some extent a zoo, as it is too small for several of the species that call it home. These animals are restricted in the distances they can travel and territories they can lay claim to.

And small as it is, the Kruger National Park is in danger of being further reduced, as local tribes have claimed half of the land. It was a good introduction to the conservation debate.