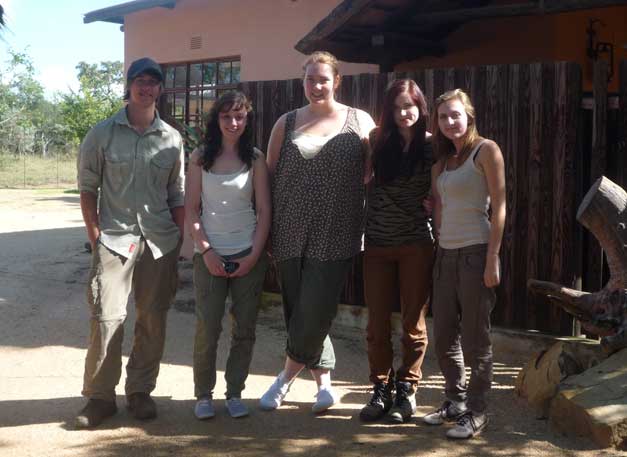 This week has been full of great experiences. On Saturday we were tasked with putting Frontline on the cheetahs. This included trapping them one by one in a crush cage and restraining them with sticks. It proved quite challenging with the wild cheetahs, but the ones born at the Centre were a little more accommodating. It took three of us to hold the cheetah down, and a fourth one to apply Frontline to its back and spray fly repellent on its ears. It was really nerve racking, but at the same time worth it to know we were doing something positive.

On Sunday we left camp at 5am (wow!) to drive to the Kruger National Park. We saw many different animals while there, but the most exciting by far was the leopard. After waiting and looking for a long time, it eventually crossed the track behind us with a dead impala. We also saw white rhinos, elephants, hippos, the endangered Saddle-billed stork, Lilac-breasted rollers, and many more.

Tuesday was really exciting as we helped release a male caracal back into Kapama Game Reserve. It was incredibly satisfying to see him running off, knowing that we helped him regain his freedom.

We’re looking forward to the activities planned for our final week, one of which is a survival night out in the bush. Visit our Facebook and Flikr albums to see more photos from our wild African adventures.