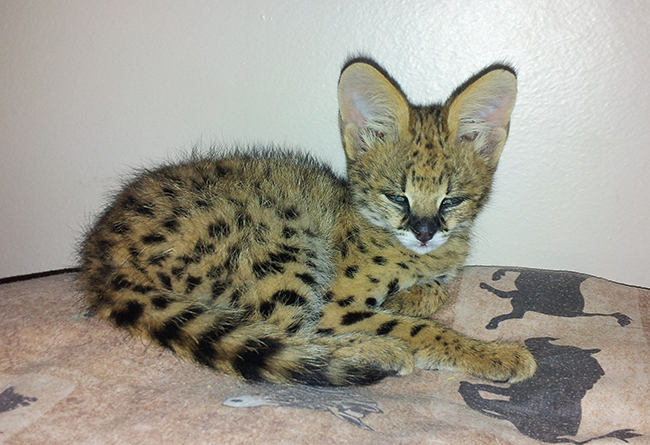 This bundle of spotted fluff, “hopping” with personality, is Kuile, the latest addition to the Hoedspruit Endangered Species Centre (HESC).

Kuile was found by a farmer in Lydenburg, cold and covered in mud. The farmer gave the kitten to a couple who absolutely love and adore cats, and they promptly took the little creature to the vet. The check up revealed that he was a bit thin and covered in fleas and ticks, but otherwise in satisfactory condition. The small Serval was treated for his external parasites, and sent home with the couple with Kyron Kitty Milk and Hills a/d. The couple kept him for a week to ensure he recovered from his ordeal. Despite the endearing creature, they knew that as a wild animal it was not a good idea for him to become too habituated to people. After their call to HESC, Christo and Licia (our animal curators) left immediately to fetch the kitten. 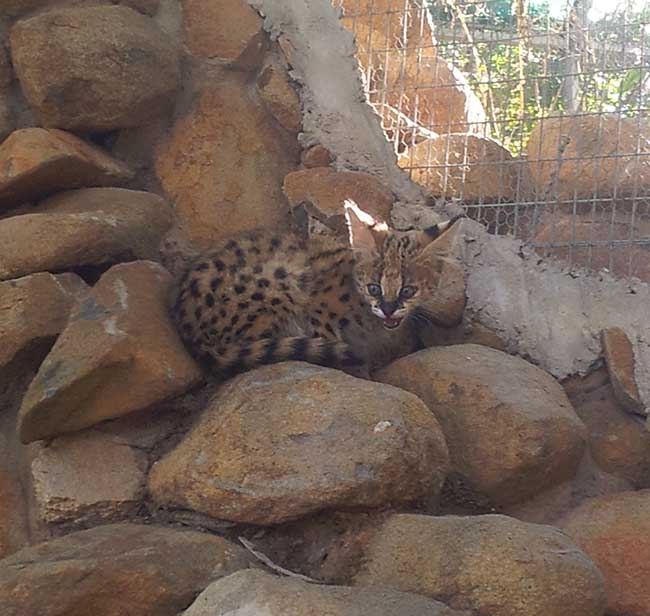 He was given the name â€œKuileâ€ – in honour of the couple who had done so much for him and made the tough (but right) decision not to keep him as a pet. He was a little nervous and suffered from diarrhoea when he arrived, but soon settled nicely into his new home. Kuile was gradually moved to Iams Kitten food, after which his diarrhoea quickly abated. He is slowly gaining weight, and will soon be a feisty picture of Serval kitten health.

For those of you who might have considered keeping a Serval at home, here are a few reasons why they (along with any wild animals) do not make good domestic pets:

There are so many unwanted cats and other pets being put down in shelters these days. Please rather adopt and give one of these animals a second chance at a wonderful life. Leave the wild animals in the wild – were they belong.