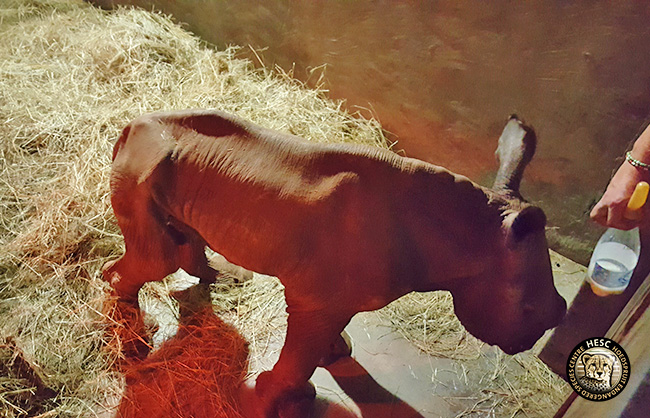 Yesterday evening we welcomed a new baby rhino. Thankfully, this time it was not a case of poaching; however, she needed to be rescued immediately from a situation that could have potentially turned dire without human intervention.

A game farm contacted HESC a few days ago, after they had noticed that the calf was not putting on weight but instead losing weight even though she was suckling from her mother.

Plans were made to bring the baby rhino, estimated to be about a month-old, to the centre. Early yesterday morning, our team drove to the reserve where the rhinos were. As soon as they arrived, the search for the mother and baby began. This was quite a challenge as the rhinos had disappeared into the bush, but emerged after hours of searching in the mid-afternoon sun. 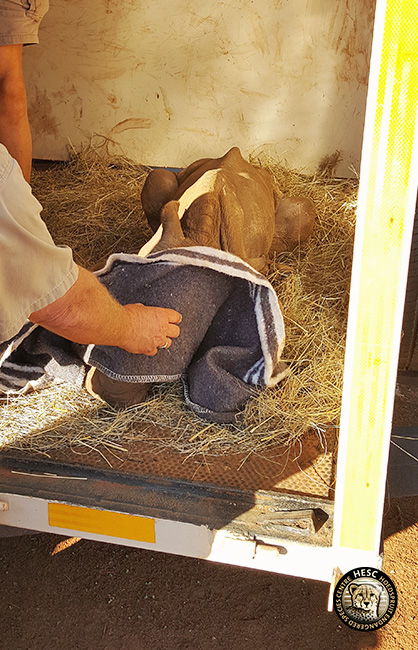 The vet was called in to dart the rhinos, and within minutes the mother was darted first, as she would have never let anyone come near her calf. The baby rhino was then also darted, and once loaded onto the vehicle the mother was given an antidote. The team then moved to attend to the baby away from the mother.

The vet noticed that the baby’s breathing wasn’t normal and knew he had to move quickly. She was given a dose of antibiotics and something for stress before being given an antidote. Once the calf was conscious, the trip back to the centre began. 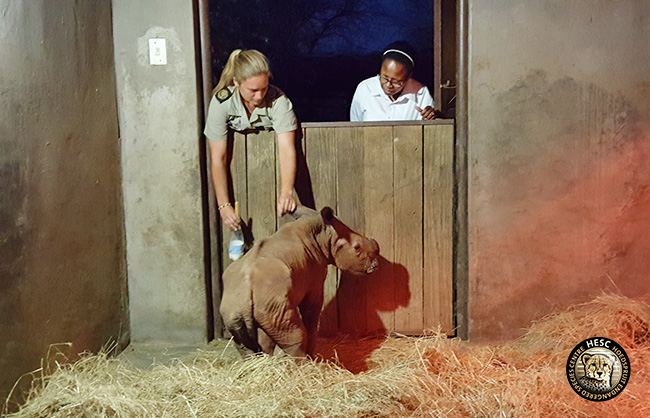 The team and the calf arrived at the centre in the early evening, where the rest of the HESC team, including Dr Rogers, was on stand-by. The paper work was completed and the baby rhino was named Esme. This name was actually given to her by the people at the game farm where she comes from.

Esme was moved into the boma, where she would be kept and closely monitored over the next couple of days. Due to the stress from the trip, Esme did not want to drink the first bottle offered to her. We also couldn’t weigh her either, but estimate her weight to be about 50 kg. 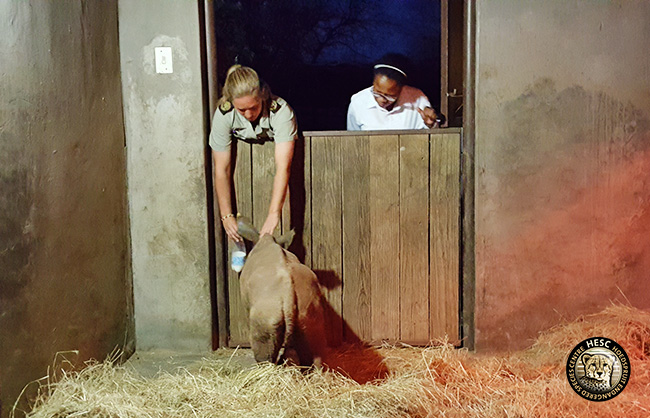 Fortunately, it didn’t take Esme too long to calm down, and she took her first bottle during the night feed; which was a great relief to all of us. Going forward, Esme will receive 10 x 500 ml of skimmed milk, protexan and glucose until she starts putting on weight; at which point her feeds will be adjusted to eight times a day.

Esme will be introduced to Moo the sheep, who will be her companion. We are happy with Esme’s smooth transition and will be keeping a close watch on her as she gets familiar with her new surroundings.

We will keep you updated on her progress!

An update on Caesar and his arthritis