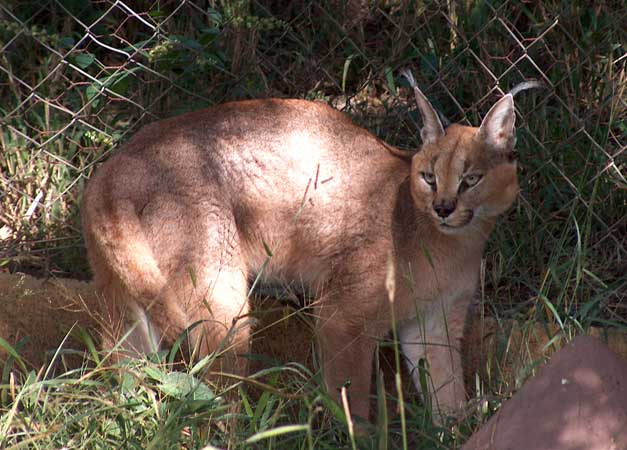 The soon to be released Red caracal

At the beginning of December last year HESC received a phone call from a farmer who was experiencing problems with a Red caracal on his livestock farm. Fortunately he decided against killing this beautiful animal, as is so often the case in these situations. Christo (curator) and Werdy (guide) drove all the way to Roetan to fetch the reprobate cat.

Upon arrival at HESC the caracal was immediately quarantined so that we could give him a check-up and allow his wounded nose time to heal. He soon regained his health, and last week we decided that the time had come for him to return to the wild. We decided to release him on Kapama because caracals are rarely seen on the reserve, but more importantly there are no farms anywhere near the reserve. Which means the cat will stay out of trouble!

We stood with our cameras at the ready, waiting to capture his first steps back to freedom. The eager caracal proved too quick off the mark for the likes of us however, and we only managed to snap one photo before he dashed off into the bush. No doubt he was very happy to be back in the wild.

The famers tend to view caracals as pests, which is understandable given the cats’ tendency to prey on their livestock. Their penchant for eating food that doesn’t belong to them aside, these cats boast some astounding attributes. The black tufts of hair on their ears act as a windsock, detecting wind direction and speed when they hunt, and allowing them to get really close to their prey without being detected.

Caracals have exceptionally short tails, and their front legs are shorter than their hind legs, all of which helps them with hunting birds. Their longer and stronger hind legs give them the necessary power to jump straight up into the air. Catching birds in flight is also where their short tails come into play. They use their front legs to close the wings, and then fall back to the ground. If they had a long tail they would risk breaking it.

The black markings on their face and behind their ears serve to accentuate their facial expressions. When they want to intimidate a potential threat, they turn their ears towards their competitor in a frown, enhancing their mood and making it clear that they mean business.

The newly released caracal is sure to thrive in the wild, and hopefully he will find a partner and introduce some baby caracals onto the reserve in the future. Visit our Facebook and Flikr albums to see more photos of this handsome cat’s release.

Our rhino orphans are de-horned