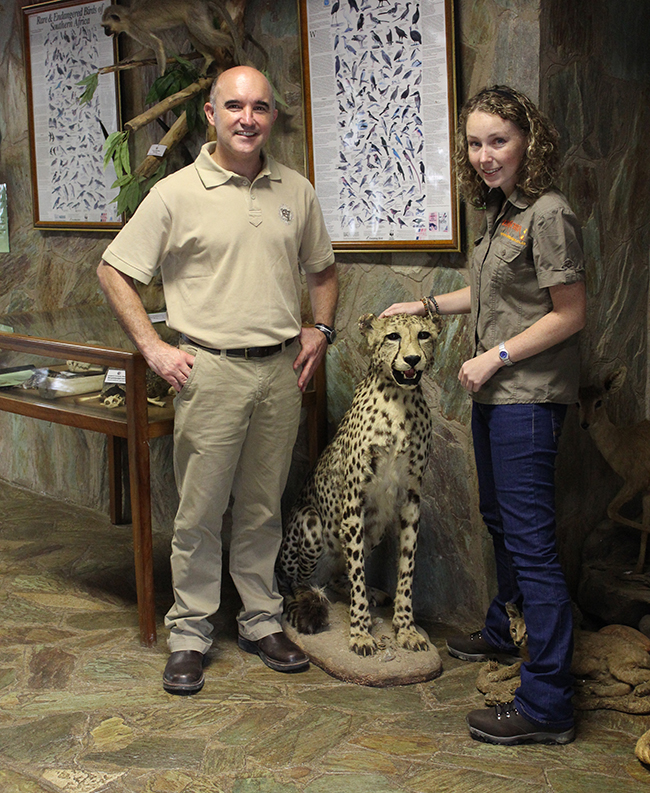 Professor Eddie Webb and his student, Marthie Nickols from the University of Pretoria presented their topics of research involving the Hoedspruit Endangered Species Centre’s cheetah to a group of staff, Mrs. Roode, and Mr. and Mrs. Roberts (US Friends of the HESC).

Marthie Nickols is studying at the University of Pretoria, doing her first year of her Masters degree in MSc (agric.) animal science: production physiology. She was born on the 6th of March 1990 and grew up in Pretoria.

Marthie presented a review covering the impact nutrition has on the health and well being of the cheetah, including its role in a number of diseases that are only seen in captive cheetah. She described how management of cheetah facilities had to be adapted and adjusted in order to improve the psychological health of the cheetah, as well as to prevent diseases such as metabolic bone disease, gastritis and kidney failure.

Metabolic bone disease occurs when animals consume too much phosphorus in their diet in relation to calcium, resulting in bone minerals being reabsorbed by the body, weakening the bone in the process. Gastritis, on the other hand, is often caused by bacteria in the stomach known as Helicobacter, although it can also be caused by stress. Animals suffering from gastritis feel nauseous, may vomit and lose weight.

Professor Webb went on to describe the research he has been doing in the role of magnesium in the animals’ food, and the supplement he has helped to develop – specifically designed for the cheetahs at HESC. He showed how magnesium helps the body absorb calcium, while decreasing the amount of phosphorus absorbed (remember, metabolic bone disease), increasing the volume of urine produced and reducing the amount of minerals in the urine. This all aids in reducing the risk of kidney or bladder stones developing.

Professor Webb is part of the advisory committee that assists the Centre in caring for and ensuring that the cheetahs are at their healthiest.

Stick your head and legs out!