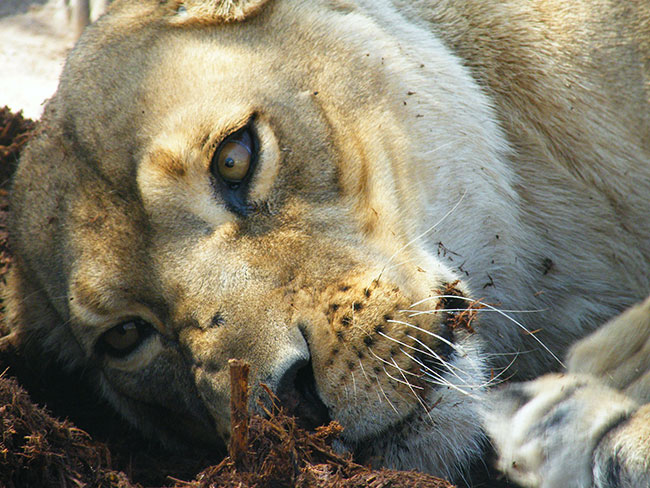 We are sad to announce the death of resident lioness, Sarah.
Sarah and Caesar were rescued in Portugal when a circus went bankrupt. Animal Defenders International (ADI) found both lions and brought them to HESC. Next year would have marked their 10th year with us, estimating them to both be approximately 18 years old.
When we went out on the usual 8am tour on the 11th of December, Sarah seemed fine. However, when our curators went to do the routine checks on the animals later on, Sarah was found lifeless. Dr. Rodgers was immediately called in and an autopsy was conducted. It was found that Sarah had pyometra, the result of  the contraceptives the circus had used on her.
Pyometra is a secondary infection that occurs because of hormonal changes in the female’s reproductive tract. Unfortunately pyometra has no symptoms, and therefore her condition could not be detected.
It’s been seven days and Caesar seems to be coping well without his partner. We are keeping a close eye on him to ensure that Sarah’s death does not have a negative effect on his health.