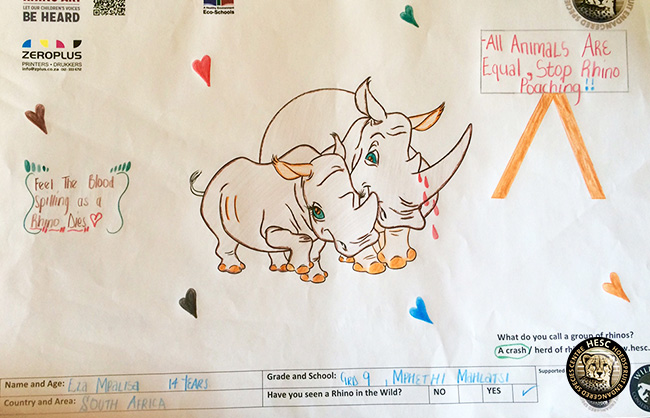 World Rhino Day is being celebrated on 22 September this year and the Hoedspruit Endangered Species Centre (HESC) is reaching out through its Rhino Art @ HESC project to schools to participate in creating an awareness about the plight of this endangered species in South Africa.
Poaching statistics released by the Department for Environmental Affairs in February 2017 show that 1054 rhinos were killed in South Africa alone during 2016, a figure that equates to almost three rhinos being killed every day. In just a decade, more than 7 137 African rhinos have been lost to poaching.
HESC’s Adine Roode says while Rhino Art involves local Hoedspruit communities bordering areas where poaching takes place, the project is also being extended to involve various Gauteng schools. She says the aim is to create conservation awareness and a vested interest in protecting the rhino and other endangered species amongst the youth in general.
“By educating our learners we hope to harness support for the war against rhino poaching to eradicate this scourge and preserve the rhino species for future generations,” she says.
Schools that will be participating in the project this year include Anton van Wouw and Tygerpoort in Pretoria, Rivonia Primary, Afrika Tikkun Trust, King David Sandton Primary School and Hurleyvale Primary School in Gauteng.
Funding from the Wildlife Conservation Trust (WCT) offers HESC the opportunity to grow the Rhino Art project. During 2016, 73 300 children from over 199 schools and youth organisations throughout Southern Africa participated in the project. This year, HESC has already reached out to more than 6 000 learners.
Roode says Rhino Art has always been far more than just a colouring-in competition. The art also holds vital clues as to how the youth of Southern Africa view rhino poaching and other forms of crime against wildlife, and conservation in general.
Schools participating in the project receive Rhino art sheets for learners to colour in and comment on, and an information pack for teachers to use in the classroom. When the artwork is collected from the schools, plaques and certificates are presented to the participating schools and learners respectively.
Click here to download your Rhino Art sheet.

Why do we keep wild dogs at HESC?